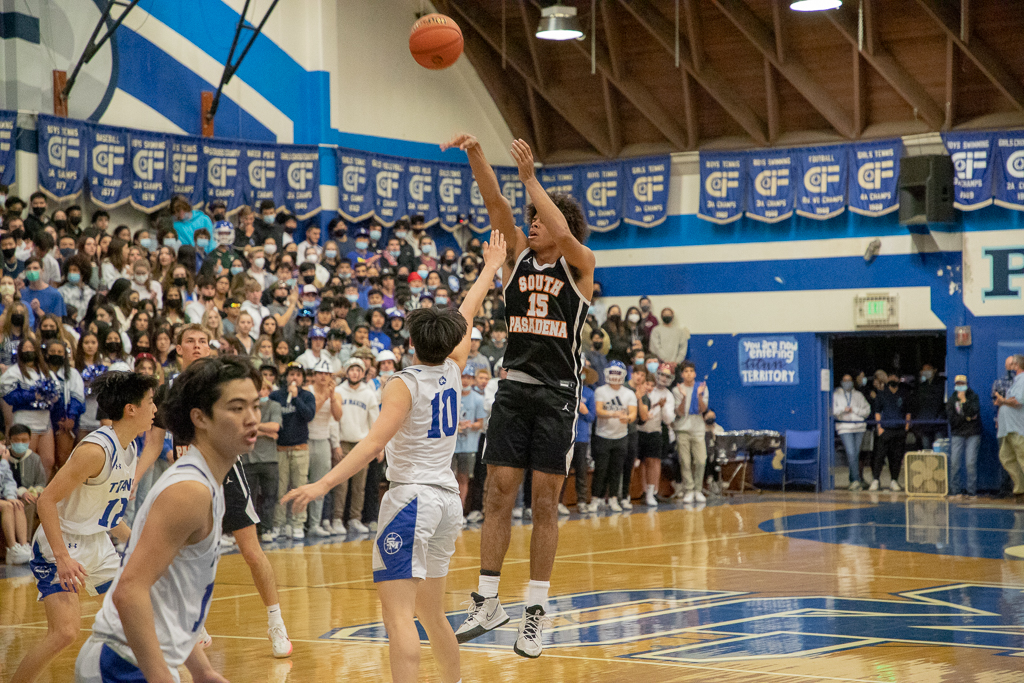 The Tigers closed their league season with an 8-2 record, and are awaiting the CIF playoff bracket release.

Tiger fans came out in full force to support boys basketball in their final league game against San Marino on Friday, Feb. 4. Tensions were high, with both teams clawing for the top two spots in the Rio Hondo League. Eventually, boys basketball succumbed to the San Marino Titans 77-71 after a grueling overtime.

Riotous cheers began the game as the Tigers won the tipoff and lost an early shot. San Marino picked it up and in turn, lost a basket. During the turnover, senior forward Jonathan Guy landed a field goal. As Guy set aim for his foul, San Marino booed and the Titan defenders cornered the ball but again lost a shot. Senior guard and forward Ezekiel Pannell intercepted a Titan attempt at the key, leaving senior center Sage Wayans to charge down the court. The Titans sank both of their free throws, tying the game 2-2.

As the fouls started racking up, San Marino was leveling the scores. Freshman guard Sebastian Martinez rotated in for Pannell. San Marino was dribbling circles around South Pas and South Pas was losing control when they couldn’t afford to. San Marino ended up reaping the benefits of the Tigers’ loss, garnering a three-pointer and foul shot with almost two minutes left in quarter one, bringing them ahead 12-7. The Tigers assessed their options during a ten-second time out while the Titans whipped out their band. After this break, the Tigers were able to capitalize off San Marino mistakes. Senior guard Dillon Akers sank a long-awaited basket after a Titan lost control of the ball, leveling the score to 12-10.

The first quarter buzzer ran down and San Marino sank a three-pointer from the right side of the key, bringing the total to 15-10 for the Titans. 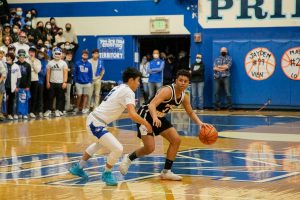 Martinez was unable to shake a persistent San Marino defender, which threw off his aim for the basket, narrowly missing it. The Tigers continued to take risky shots but landed simpler ones on the rebound, including a field goal from right beside the basket after a failed earlier shot. San Marino, however, was racking up points left and right. The Tigers continued to miss the unobstructed foul shots, often only making half of them.

San Marino racked up more three-pointers as South Pas continued to fumble their dribbling and passing. They surmised an eight-point lead with 21 points to South Pas’s 13. Akers still managed to break through the San Marino defense, scoring a field goal halfway through quarter two. An Akers breakaway led to another layup. From an Akers pass, Guy was able to grab two more points.

The distance between San Marino and South Pas continued to widen as the Titans nabbed twelve points in baskets to garner 33 total points. All four of those baskets resulted from a lacking Tiger defense. To add fuel to this burning Tiger fury, San Marino accurately landed those elusive free throws. As the clock ran down, Finny Ho landed a basket and the Tigers slumped off the court. By the end of the first half, South Pas was trailing San Marino 13 points, 22-35.

Charged with passion, South Pasadena started the second half with the ball. But San Marino overtook the game by way of foul shots. Similar to the first half, San Marino had stronger fundamentals leading to a clean almost mistake-free game. Wayans managed to break through the impenetrable San Marino defensive line, making a two-pointer. But a Titan three-pointer during the turnover made it challenging to regain, 40-24.

The game was not without its highlights, Pannell and Akers both sank incredible three-pointers. But San Marino bested them with a larger volume of three-pointers and smoother free throws.

Akers capitalized on a lost San Marino throw and passed to Guy, who quickly shot it to Wayans to land a three-pointer. Wayans previously landed one of his two free throws and a field goal, so the Tiger tally was 33 points, butut San Marino was still ahead 10.

The gap began to close with Wayans nabbing a three-pointer South Pas continued costly mistakes, undershooting the basket and failing to adequately prepare for the influx of San Marino offense. Pannell landed a three-pointer as well, inching the Tigers closer to the Titans 45 points. Even with an Akers fumble, he still regained the ball and managed a three-pointer.

The buzzer rang out and San Marino landed a basket, bringing the quarter three score to 47 for San Marino and 41 for South Pas. To win at this point, the Tigers needed a magical fourth quarter, either with multitudes of San Marino mistakes or a plethora of successful shooting patterns. 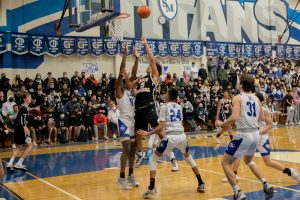 Quarter four had an early Tiger foul shot. San Marino wrestled a breakaway and careened down the court but Guy intercepted. This rapport continued until San Marino sank another three-pointer, and with a successful free throw, they surpassed the 50-point threshold. Martinez nabbed one of his two foul shots. Unfortunately, the Titans continued to land smooth three-pointers. Even with two Akers free throws, the Tigers were still behind eight points. Akers scored another three-pointer on the rebound, landing South Pas 48 points to San Marino’s 53.

The Titans still distanced themselves from the Tigers, with continual two-pointers. Despite a Jonathan Guy layup and free throw, a four-point gap remained. After San Marino completed one of their two foul shots, Martinez completed both of his, bridging the gap 56-53. At this point, it was imperative Wayans succeed in his two foul shots, but he only completed one.

Three minutes left on the clock and two points separating them, the Tigers and Titans went to work. A Titan dunk widened the gap back to its stable four-point place. This chasm only continued after San Marino was afforded two foul shots, bringing them to sixty points.

Martinez sank a basket and the Tigers aggressively defended their counterparts. With only two minutes left until the time ran down, it seemed unlikely the Tigers would topple the Titans. A Titan shot clock violation led to Tiger possession, where each player succeeded in their passes. A Guy three-pointer was incorrectly identified as a two-pointer on the scoreboard. Immediately after, Guy completed another three-pointer. In 30 seconds, a successful Titan free throw brought the game to a nail-biting tie, 61 apiece.

As the 30 seconds elapsed, each team remained at 61 points. Thus, the game entered overtime. Four minutes on the clock and it all comes down to the tipoff. San Marino won it and gained two foul shots, edging out the Tigers. But Pannell landed a three-pointer. The one-point difference tightened as San Marino scored a field goal and landed both foul shots.

An unobstructed Titan shot led to San Marino surpassing 70 points. Pannell completed two of his foul shots, lifting the Tigers to 68. The Titans netted another three-pointer and Guy countered that with one of his own. The remaining time elapsed and San Marino walked away with 77 points to the Tigers 71.

A lack of a consistent shooting style, grasp of fundamentals, and insufficient defense plagued the Tigers in Friday’s game. Despite all that, the Tigers played valiantly, clawing from a 13 point difference at halftime, tied by the end, and only losing by six in the overtime.

“It was the little issues: free throws, layups. I couldn’t ask for a better team of guys to play with,” Akers said. “[I want to] break this three-way tie and set us up for playoffs.”

The Tigers now stand second in the Rio Hondo League, behind San Marino, and are still qualified for CIF. The CIF-SS Winter Playoff bracket will be announced on Tuesday, Feb. 8, but for now, the team is preparing for a neutral non-league game against an undisclosed team on Saturday, Feb. 5.