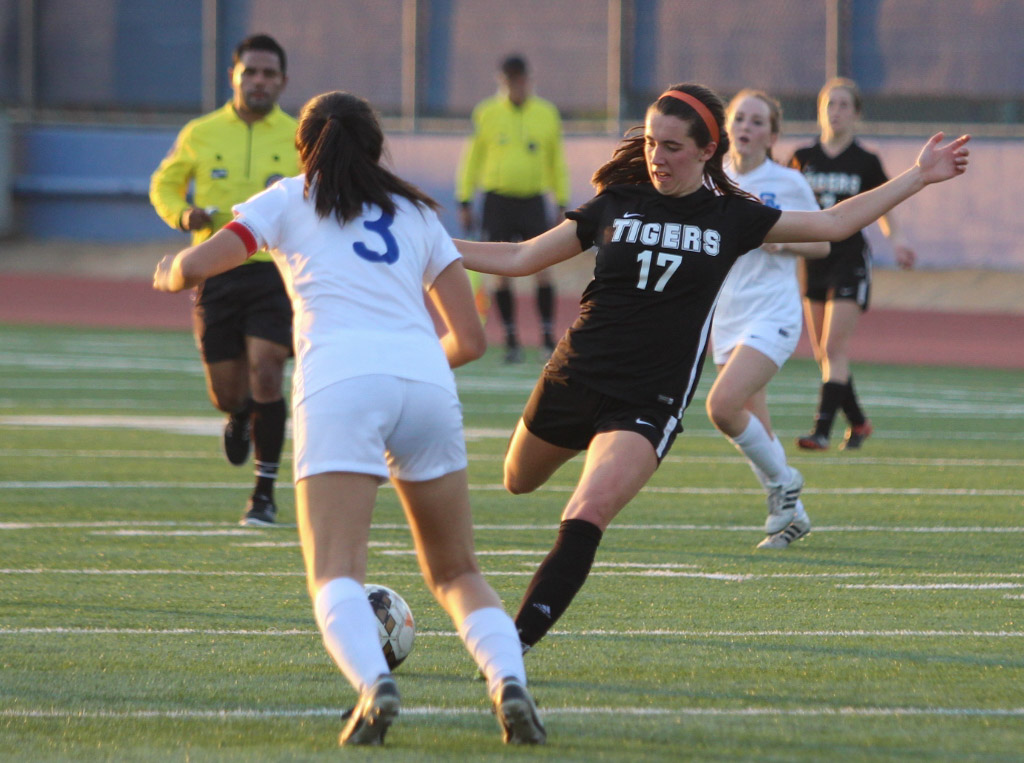 Junior Uma Hornish takes a kick on goal just outside the Titans' box. The win served as redemption for the team's loss to San Marino earlier in the season, which still stands as the team's only league loss.

In a glorious showdown, the girls’ varsity soccer team came out triumphant over the San Marino Titans, 2-0, at an away match on Wednesday, January 31. After a frustrating and narrow loss to San Marino at the first league game of the season, the Tigers came back to assert their true dominance. This gratifying win situates South Pas at first in league, with an overall season record at 13-1-1 and a league record at 5-1. 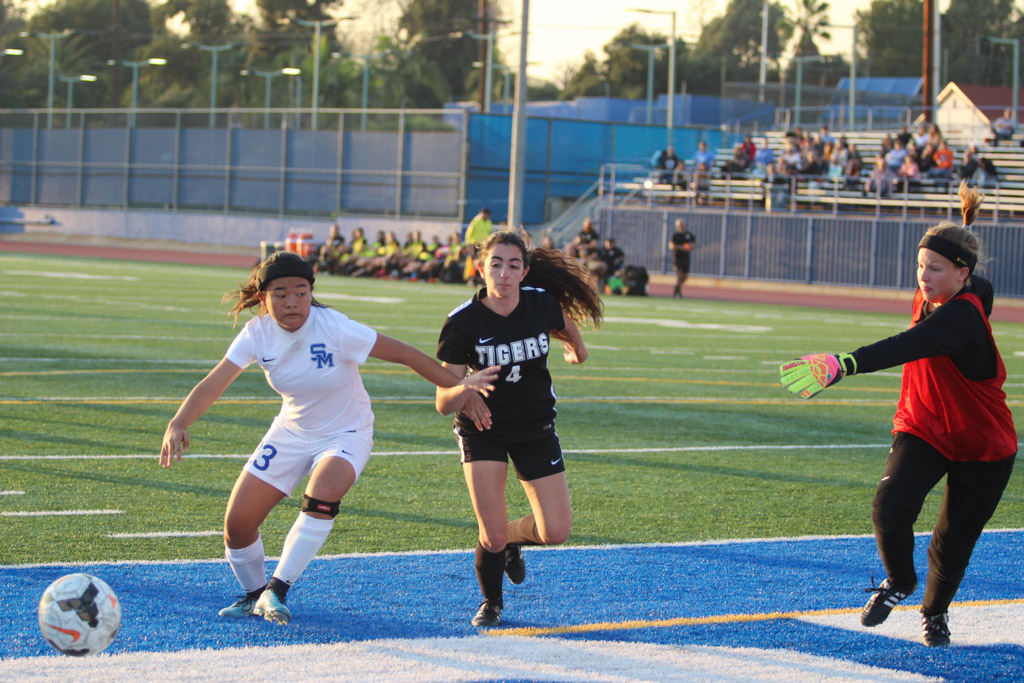 Junior Jenna Noueihed chases after the ball as the Titan pair frantically try to defend her.

Right out of the gate, each and every Tiger played to the best of their abilities. Their prime form coupled with a deep sense of urgency spelled absolute doom for the opposing Titans. The South Pas offense blasted off in beautiful synchronization, as flawless passes between midfielder and forward allowed them to dig deep into San Marino territory. Senior and junior midfielders Emily Dunn and Rainey Tilley outplayed and outpaced oncoming defenders, the Titans nipping at their heels only to find the ball was long gone. Early in the half, junior forward Uma Hornish delivered Tilley a gorgeous scoring opportunity, which Tilley completed in poised fashion. Not long after, senior defender Celeste Amaya rounded off an amazing play– coming from far downfield all the way to the striking zone– providing Hornish the means to seize the second and final goal of the match. The Tigers’ scoring campaign was then punctuated by a yellow card due to a heat-of-the-moment jersey pull on a Titan. 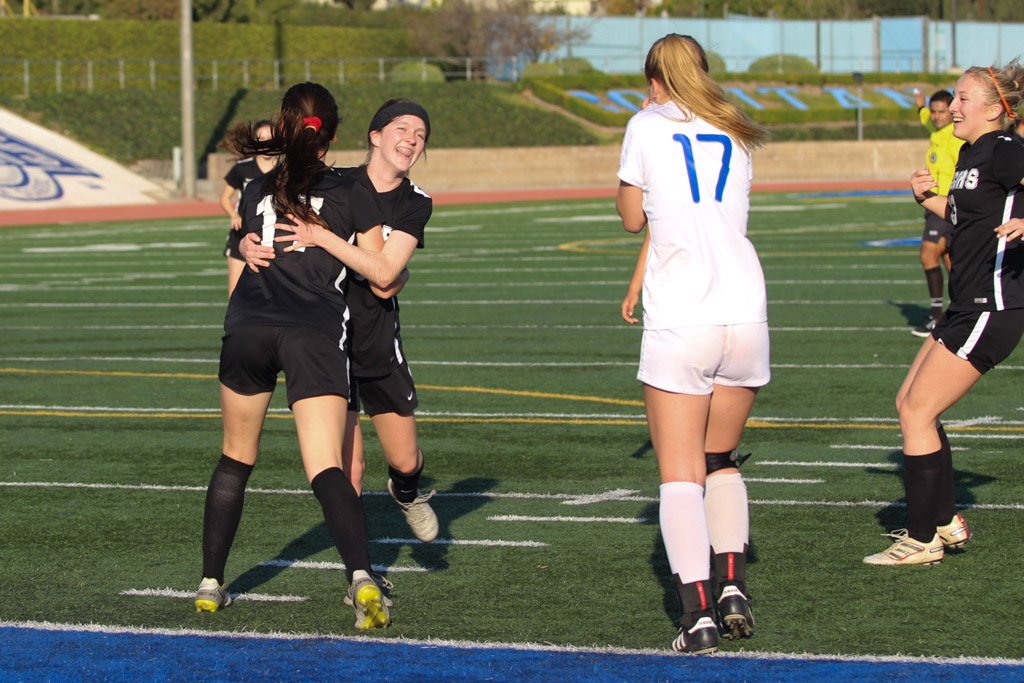 Meanwhile, on Tiger domain, this first half paraded the full extent of a wicked Tiger defense. Junior defender Booch Barrera’s name will be put in the books; her technical skill is astonishing, as she easily plucks possession from opponents and fires balls substantially upfield. Amaya, too, showcases an equivalent capacity, blocking game-changing shots with a fervor. Senior and junior defenders Riley Segal, Alyssa Bonk, and Jade Myer only further cemented the impenetrable backline. Rattled by the Tigers’ abrupt goals and stellar communication, the Titans could not even muster an accurate shot on goal for the remainder of the half.

“Today was definitely one of my favorite games all season. For us, the intensity was there, and we handled it so well. We all knew what we are doing and were all talking– spreading [the Titans] thin and breaking through their defense,” Barrera said. “I think we were the stronger team anyways– our forwards were faster and we beat them on the line. Our defense communicated really well– Riley and I were never confused on who we were marking, we all stepped to the ball faster than [the Titans] did. It really all came down to our mentality, because we know we have the skill and now we have shown it.”

San Marino began the second half with a much more physical approach to gameplay. In response, South Pas had to adjust to a more protective configuration. Tiger offense took a backseat while Tiger defense ramped up their efforts– the Titans were clearly desperate for a goal. Following some questionable calls on the behalf of the referees, the Titans were granted multiple free-kicks that threatened a shutout victory. Thankfully, senior goalkeeper Sophie Reynolds forbid San Marino from encroaching on her net. Reynolds’ saves weren’t messy in any manner; rather, it was as if her sheer will (and dexterity, obviously) could stop shots in midair. In an all-encompassing team effort, the Tigers gripped tightly onto their winning margin for the rest of the match and clinched the win.

“This is a fantastic win. I feel like I’ve said this about a lot of our games, but to come over here and put [the Titans] away in the first half is amazing. I would have loved a couple extra goals in the second half, but hey, at the end of the day, a 2-0 win keeps our goals for us and adds two more goals to our record. Again, we’ve only given up one goal in league,” head coach Victoria Lathrop remarked. “It was a total team effort from the front to the back. Noemi and Sophie really stepped up today to command the field. Booch, of course, was brilliant barking orders in the back. Both of our goals were gorgeous– you couldn’t ask for anything better. Our little saying is that we want to leave no doubt that we are the better team, and today was certainly a ‘leave no doubt’ type of win.”

Rio Hondo league season is rapidly reaching its conclusion, as the Tigers only have two games left before any CIF play. Friday’s rematch against the La Cañada Spartans will be a definitive one– a South Pasadena success will basically guarantee the Tigers a league title. The Spartans have been playing much stronger than they have earlier in the season, so South Pas will have to bring a similar level of play if they are to beat La Cañada on their home turf.

Boys’ soccer climbs back to .500 with a big win over San Marino