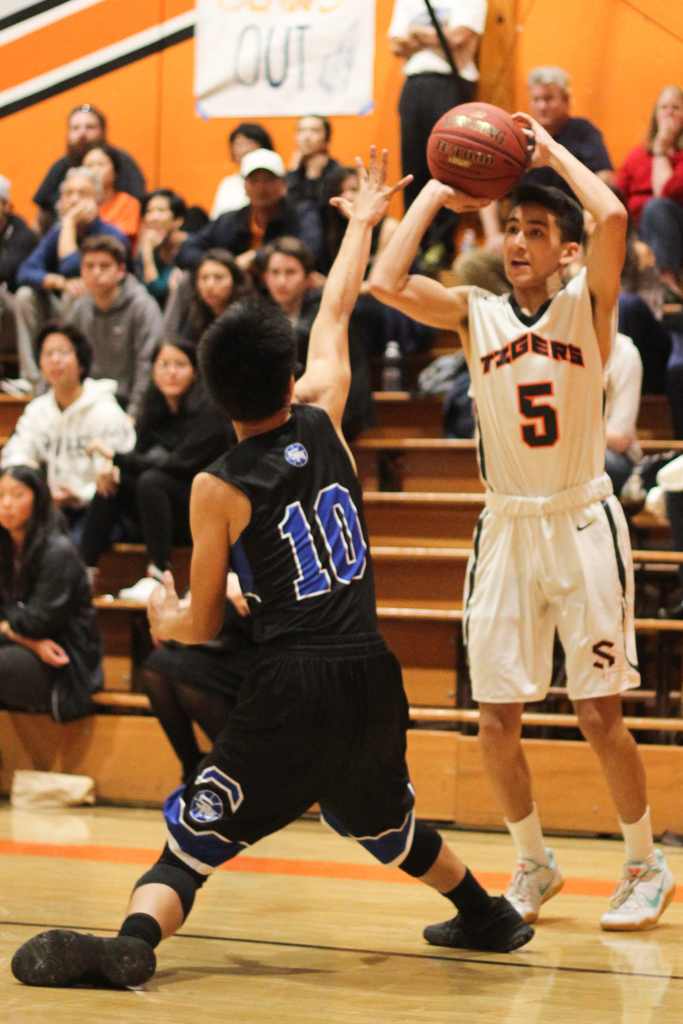 Senior Nick Corvino shoots over his sliding defender, as he lead his team in scoring with 32 points.

Boys’ basketball overwhelmed San Marino 76-69 on Wednesday, January 21, dominating early and preventing the Titans from establishing any offensive rhythm. South Pas’ prowess characterized the majority of the first quarter, as the Tigers drilled several threes and ultimately gained a lead they would maintain for the remainder of the intense matchup. This victory was a critical step in the Tiger’s quest for a CIF berth; the Tigers (3-4) must win their final three games for a significant chance at an extended season.

Following a series of baskets by both sides, South Pas seized control of the game. Senior captain Nick Corvino nailed a jumper before utilizing a steal on the ensuing inbounds play to score again and give the Tigers a 12-10 advantage. A San Marino timeout failed to inhibit South Pas’ momentum, as the Tigers showcased a unique zone coverage that resulted in contested shots and turnovers. Senior Noah Uemura’s combination of athleticism and length at the top of the arc forced San Marino to pass over or around him, which allowed the other South Pas defenders to trap the recipient. Meanwhile, the Tigers capitalized on mistakes of the flustered Titans; seniors Danny Rios and Jaylen Park drove and finished at the rim. Sharpshooters Corvino and Rios drained four consecutive three pointers that brought San Marino players to their knees and the South Pas crowd to its feet.

“Our mentality was to be aggressive early and often,” Rios said. “We came out pushing uptempo and wanted to score the ball off of easy looks in transition and we were able to do that.”

The incredible and lackluster efforts of the Tigers and San Marino, respectively, elicited vehement emotions from their crowds as the first quarter progressed, which would eventually end with a 29-15 score and a remarkable 24-5 run by the Tigers.

Rios and Corvino continued to play key roles in the second quarter, with Rios organizing and creating plays and Corvino knocking down triples and deuces. Junior Matthew Mayemura’s impressive speed opened up passing lanes and shot opportunities and senior Ben Kent was a force in the paint, whether by finishing at the rim or grabbing rebounds. However, numerous fouls prevented either squad from establishing an uptempo pace and extending a run in the second quarter. San Marino gradually decreased the deficit through drives to the basket and free throw shooting, and the first half ended with a 46-40 tally. 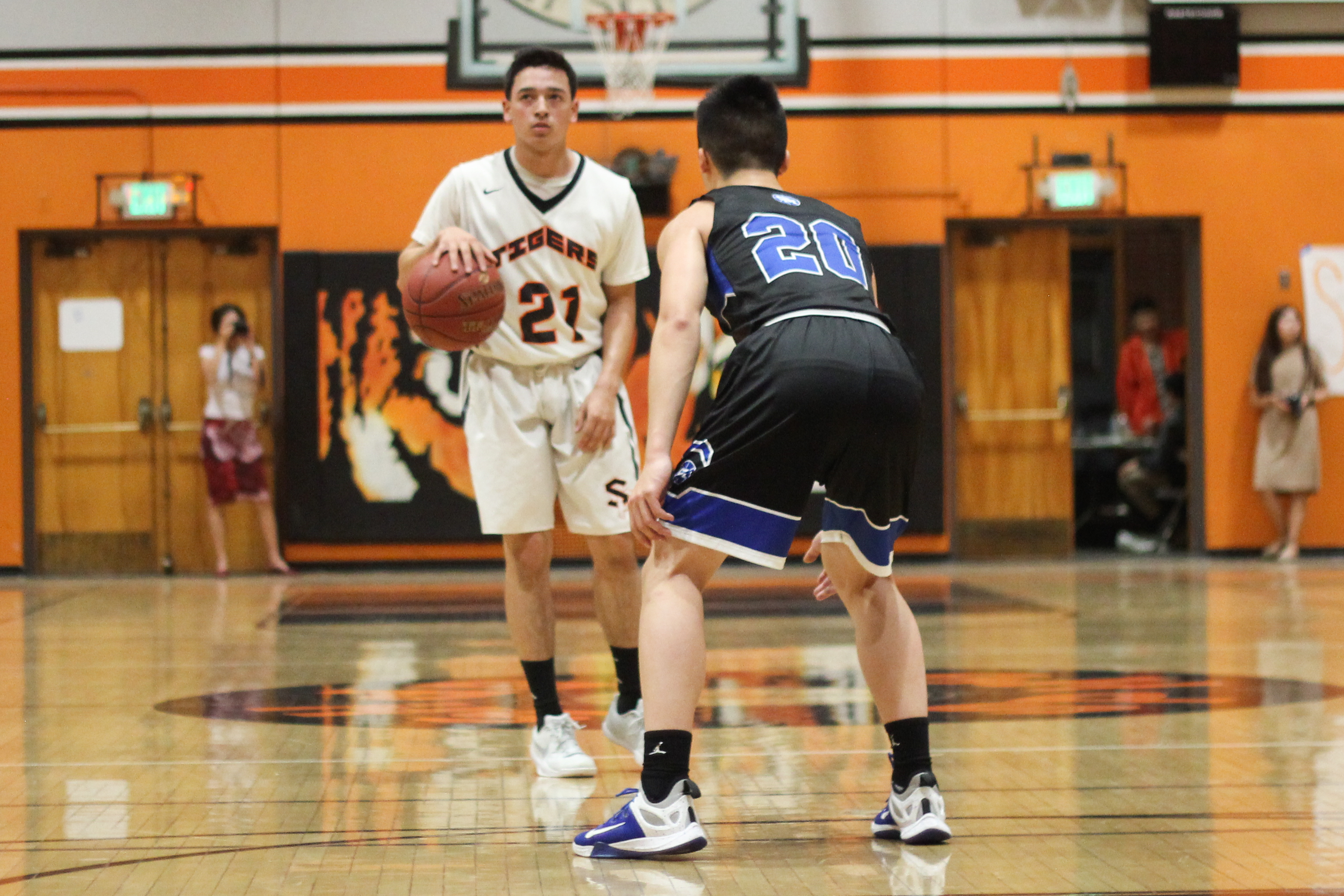 Senior Danny Rios counts down the seconds on the shot clock, hoping to end the first half on a buzzer beater.

In the opening moments of the second half, Park smacked a ball out of a Titan’s hand and Corvino converted the turnover with a three-point play in transition. Rios increased the Tigers’ lead to 58-51 with a three, before the rival squads exchanged opportunities, and Coach Ryan Lee called a timeout due to a 58-57 score with 2:17 remaining. Off an inbounds play, a streaking Corvino threw up an under-handed layup with his left hand, restoring a decent 62-57 lead. A flagrant foul on South Pas allowed San Marino to narrow the gap.  Corvino responded with another triple, before a controversial blocking foul on the Tigers caused frustration to manifest in the crowd and on the court. However, clutch plays by veteran Tigers cemented the victory for South Pas. Corvino drilled a pair of free throws to extend the Tigers’ lead before Rios, trapped by two Titans, alertly called a timeout with 51 seconds remaining. The gravity and tension of each possession increased greatly. Fortunately,  Park received the inbounds pass and slashed through the San Marino defense, showcasing his handles in the process and permitting precious seconds to tick off the clock.  Rios’ free throws in the final moments put the 76-69 game out of reach, and the South Pas crowd demonstrated its appreciation by storming the court as time expired. 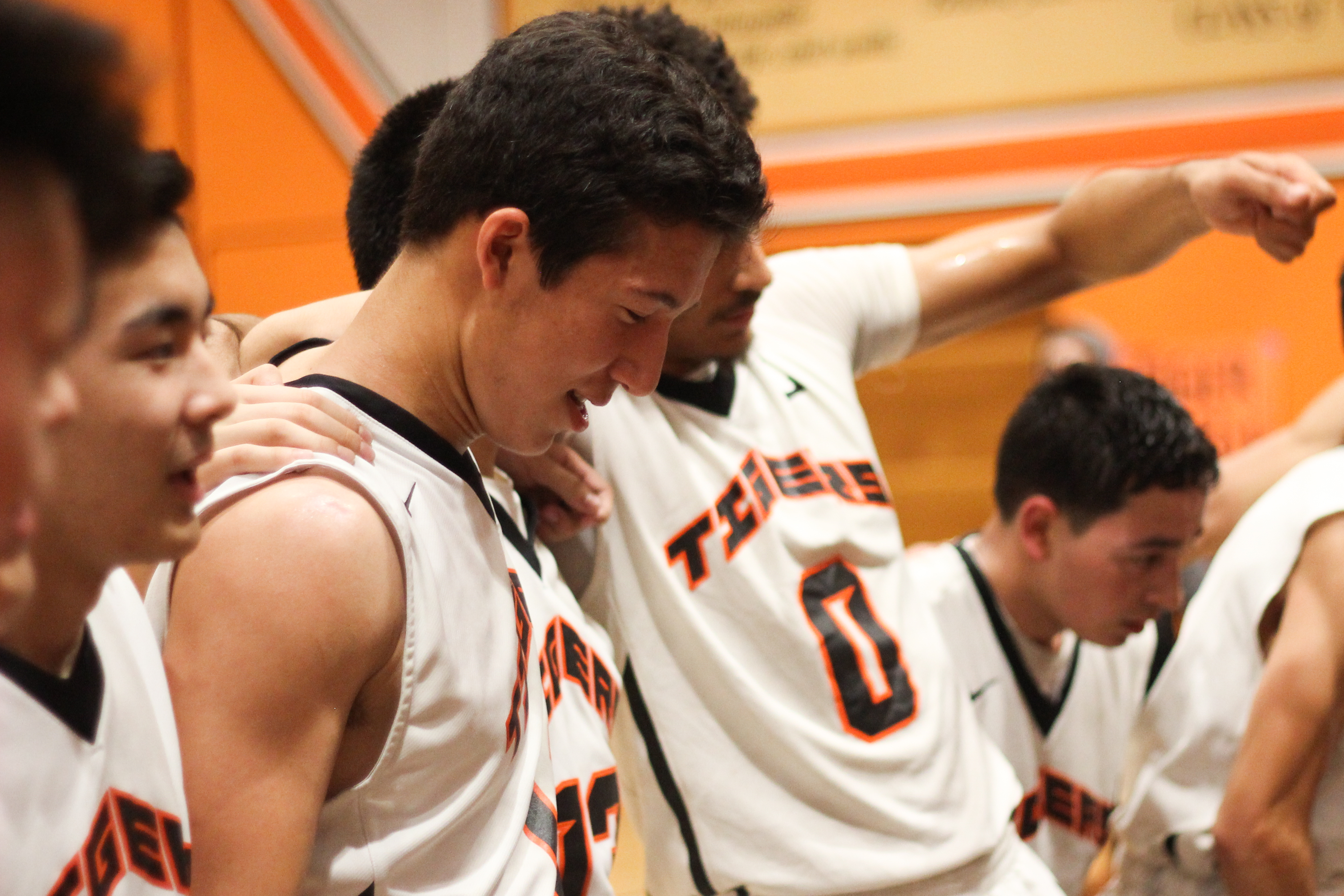 “The team’s effort was phenomenal whether the result was a win or loss,” Rios said. “Everyone left it on the court tonight and I couldn’t have asked for a better team effort.”

Boys’ basketball will face off at home on Friday, February 2, versus La Cañada, who defeated South Pas 82-55 in their previous matchup.