Boys’ soccer climbs back to .500 with a big win over San Marino 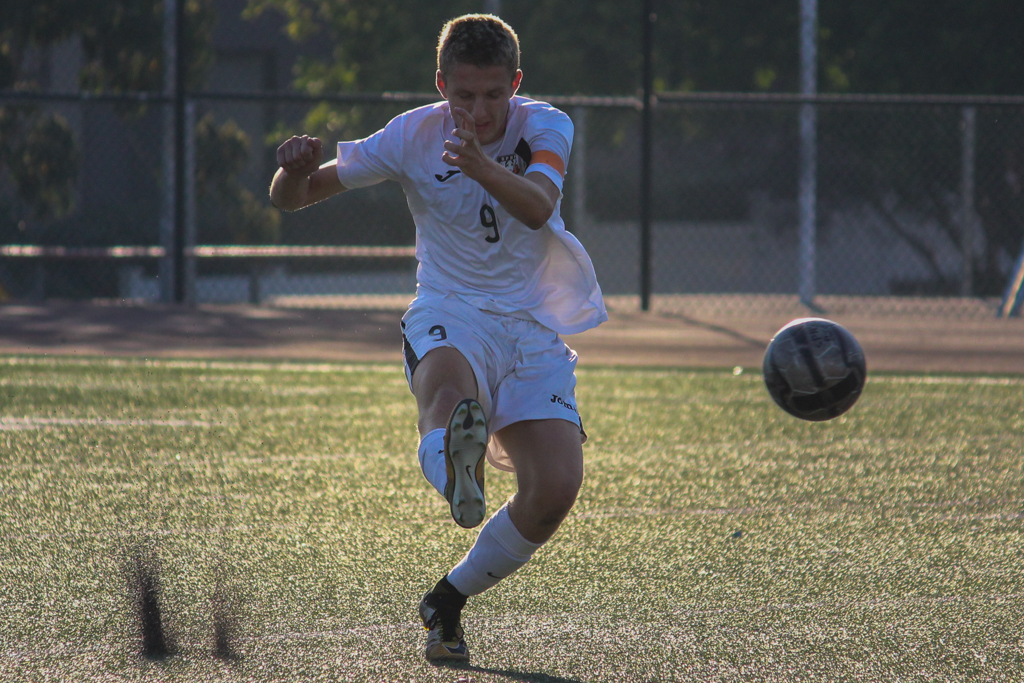 Senior Hank Rainy drives through the ball, as South Pasadena dominates its rival.

South Pasadena boys’ soccer defeated rival San Marino by a score of 4-0 on Wednesday, January 31. The Tigers overcame a slow start to the game to win their second straight over the Titans and jump into the third spot in the Rio Hondo League.

South Pas struck first in the opening half thanks to great teamwork from senior forward Jack Renken and freshman midfielder Reo Snyder. In a series of effective passes, Renken and Snyder volleyed the ball between each other, before Renken finally sent the ball into the back of the net to give the Tigers a 1-0 lead.

The Tigers had multiple other opportunities in the half, including a penalty kick, but failed to execute on any of them. However, due to the team’s solid defensive play, South Pas took their one goal lead into halftime.

San Marino came out of the break with a new momentum, as they harassed the South Pas defense during the first 20 minutes of the second half. Yet, like South Pas, the Titans wasted many of their goal opportunities. Junior goalie Ryan Wong stood strong during the Titan attack, snatching balls out the air and diving to save shots.

Using the momentum of the defensive stops, the offense reversed the field and began to control the ball. Renken was the benefactor of many of these opportunities; twice more scoring a goal, and completing a hat trick. The first goal off a free kick from 20 yards away, after he was fouled by a Titan player. The latter came off another assist from Snyder, who had sent the ball into the box on a corner kick. Playing with a 3-0 lead, South Pas continued to apply pressure to San Marino. With five minutes left, sophomore Tianho Wei scored his first goal of the season, extending the lead to four. The game would end with the same score: 4-0.

The Tigers had clawed their way back to a .500 record in league play, boasting a 3-3-1 record. The three win record is good enough for third place in the league, which would place them into CIF playoffs if the season were to end today.

South Pas’ next game comes against La Cañada, who sits in first place in the RHL with a 6-0-1. The game, scheduled for Friday, February 2, will be at home, where the Tigers own a 7-1-1 record. The two teams tied 1-1 in the last matchup at La Cañada.