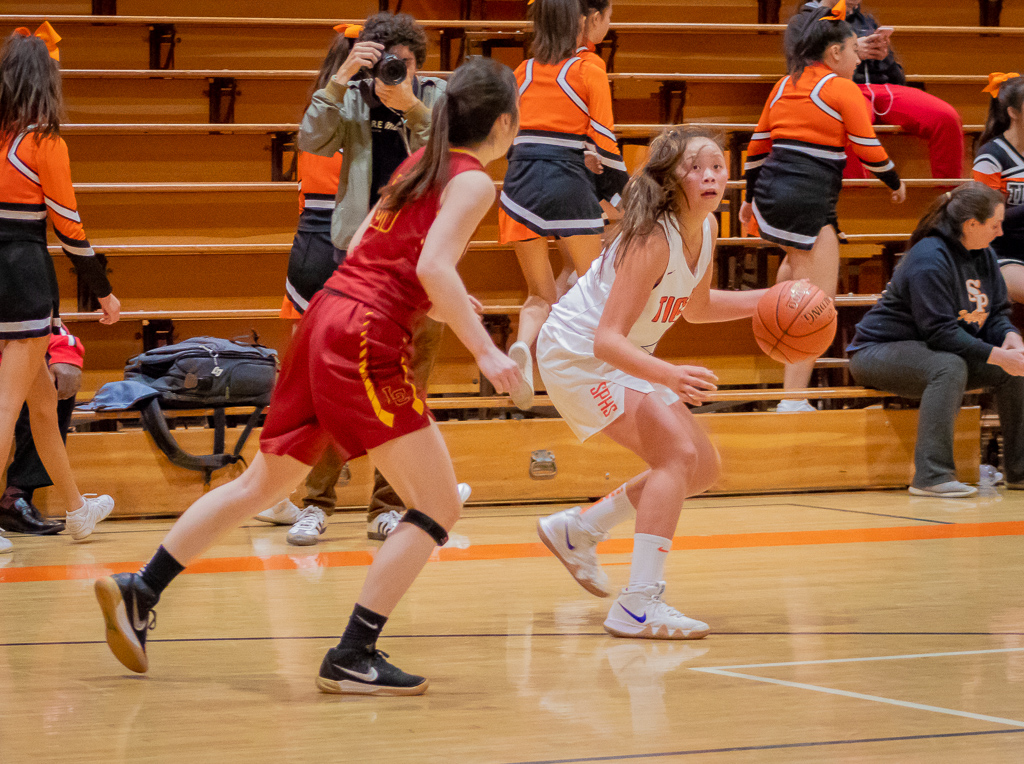 Freshman Allysan Tse searches for a soft spot in the Spartan defense during the Tigers' 63-41 loss.

The girls’ basketball team dropped their second match against the top-ranked La Cañada Spartans, falling 63-41 on Thursday, January 24th. The girls fought hard against the Spartans, but couldn’t keep up with offensive sets that allowed them to maintain a wide lead for the majority of the game.

With the loss, the Spartans remain the only team the Tigers have lost to this season. Their fast-paced play and coordination as a team proved to be just as much of a challenge to the Tigers as it was in their first match. At the start of the game, the two teams fought hard to break out to a faster start. Attacks made by senior Kayla Zhang and freshman Allysan Tse kept the Tigers afloat, but they weren’t enough to sink the Spartans, as the first quarter ended in a 17-11 La Cañada lead.

The girls continued to battle their way through the second and third quarters, with senior Lauren Kafkaloff leading the charge with numerous baskets. The Tigers attempted to climb back with baskets from junior Megan Yee, Zhang, and Tse, but their efforts fell short against the superior Spartan offense.

In the final quarter of the game, it was evident that the match was skewed in favor of the Spartans, but the girls pressed on and made a few more stellar shots. The effort was too little too late, however, and the sound of the final buzzer signaled the Spartans 63-41 victory.

“We had some good steals and shots during the first half, but we lost a lot of momentum during the second half,” senior Elaine Yang said. “We just couldn’t get the ball in the basket.”

This loss brings the girls’ league record to 4-2, which is good for second place in the Rio Hondo League. The Tigers will face off against Monrovia, who they beat by nearly 50 points last week,  on Saturday, January 26th.