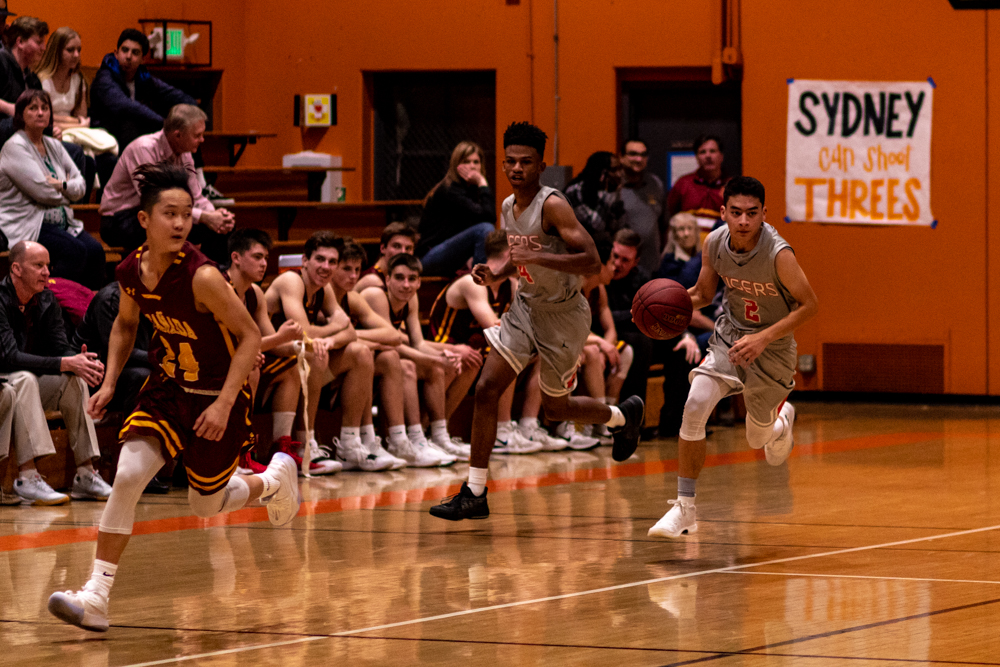 Senior Jack Gordon leads the fast break for South Pas in the fourth quarter. The Tigers remain in 3rd place in the Rio Hondo League despite losing in lopsided fashion to the Spartans.

SPHS boys’ basketball was defeated by the La Cañada Spartans by a score of 72-34. The Tigers now hold a 3-4 league record and are tied with San Marino for the third place spot in the Rio Hondo League.

The Spartans came out firing from all areas beyond the arc, making their first six shots from downtown and jumping out to an early lead. Hoping to reduce Spartan possessions, Coach Ryan Lee implemented a strategy involving the intentional stalling of plays. With the help of senior Ryan Chuang’s lockdown defense, the Tigers were able to slow down the Spartan momentum, and the first quarter concluded with a score of 22-10 in La Cañada’s favor.

The Tigers came out roaring the second quarter, with senior Kai Jones lighting up the home crowd with a reverse jelly layup. Senior Louis Jamerson added to the short-lived Tiger run with a eurostep move, baffling the Spartan frontcourt with an effective move. Nonetheless, La Cañada’s sharp shooting helped extend the lead and the half ended with the score 35-17.

Following the halftime intermission, senior Matthew Mayemura quickly went to work and started off the scoring by taking on a Spartan defender and hitting a step back three pointer. Following the make, both teams entered a shooting slump, which was ultimately broken up by a Jamerson three-ball. The Tigers continued to run out the clock, but were unable to capitalize on the majority of their possessions, and the scoreboard read 49-23 at the end of the penultimate period.

As the fourth quarter commenced, Jones continued to fearlessly attack the rim and added another pair of acrobatic layups to his nightly total. The highlight of the night came when senior Kyle Tashiro crossed his defender, dished it out to the cutting junior Michel Winkeler, who then found Mayemura who sunk a corner three. With the game out of reach, the Tigers began to play a more free-flowing game by prioritizing open shots over stalling. Senior Jack Gordon capitalized on the shift of the game plan by hitting a pair of threes and bequeathing the role of a facilitator. However, the Tigers continued to struggle on the defensive end, and the game ultimately concluded with the final score 72-34.

The Tigers head into a two game road trip, facing the Monrovia Wildcats on Saturday night and the Blair Vikings next Tuesday. Both games are must-wins for the boys, who seek to keep their CIF hopes alive.