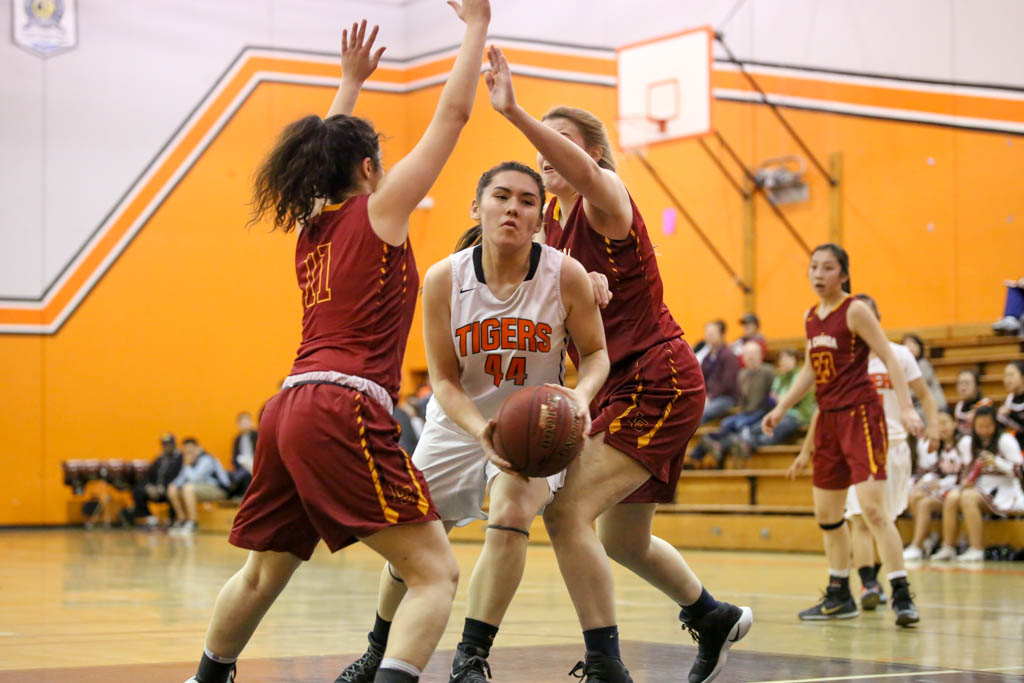 The girls’ varsity basketball team fell to the undefeated La Cañada Spartans in its final league game by a score of 54-41 on Thursday, February 9. The loss at La Cañada’s gym caps off the girls’ league record at 8-2, giving them second place in Rio Hondo. The Tigers’ overall record stands at 14-9. South Pas was unable to overcome the Spartans’ aggressive offense and unfaltering defense.

Senior captain Jalynne Li was the first to score on a fast break to the basket. Soon after, a steal from senior captain Jade Lin lead to a three from senior captain Juliana Tom to give the Tigers the lead. However, this lead was short-lived as La Cañada fought back to catch and pull in front of South Pas. After sophomore Lauren Kafkaloff scored off of a free throw, South Pas would be unable to make its shots fall for the remainder of the quarter. Meanwhile, the Spartans continued to distance themselves, and the first quarter ended at 10-6 with the Tigers down.

The girls did not fare much better in the second quarter. They were plagued with missed shots and struggled to find many opportunities to score. La Cañada’s biggest defender swatted several of the Tigers’ shots out of the air, or simply blocked South Pas’ lane to the basket, often knocking the girls flat on the ground. Li and junior captain Tiffany Holmes soon penetrated the Spartan defense with a layup each. La Cañada continued to pass and drive around the Tiger defense, and again capitalized on their big, who none of the South Pas players could reach. Lin attempted a final shot before the half closed with the Tigers trailing 20-13.

South Pas briefly clawed its way back at the start of the third quarter. Sophomore Flannery Clark made a layup, and Tom followed with another basket. This momentum did not last, however, and La Cañada soon broke away again. Many of South Pas’ shots were blocked by the Spartan defense, and La Cañada weaved around the Tigers on drives. Because the girls were outmatched sizewise, much of South Pas’ defense resorted to fouling, giving the Spartans more chances to score off of free throws. La Cañada also grabbed most of the rebounds throughout the game, putting up shot after shot until one would fall.

The fourth quarter followed in a similar fashion as the Tigers were constantly obstructed from the basket and struggled on defense. When South Pas did break through, often by attempting to shoot threes, it was rare that a shot would find its mark. La Cañada continued to pound away at the Tiger defense, which in turn grew frustrated and gave up many fouls. The Spartans used the given free throws to further widen the gap. After a string of La Cañada free throws, the game finally ended at 54-41.

“Tonight’s game was tough, but we went in the it pumped and ready to fight. I think we truly played with a lot of heart, but the fact was that things were not called our way,” Li said. “My hope for CIF is to be able to make it to the semi-finals. Although it is a long term goal, I’m counting on our defense to take us far into playoffs.”

The Tigers’ first CIF matchup is yet to be announced.