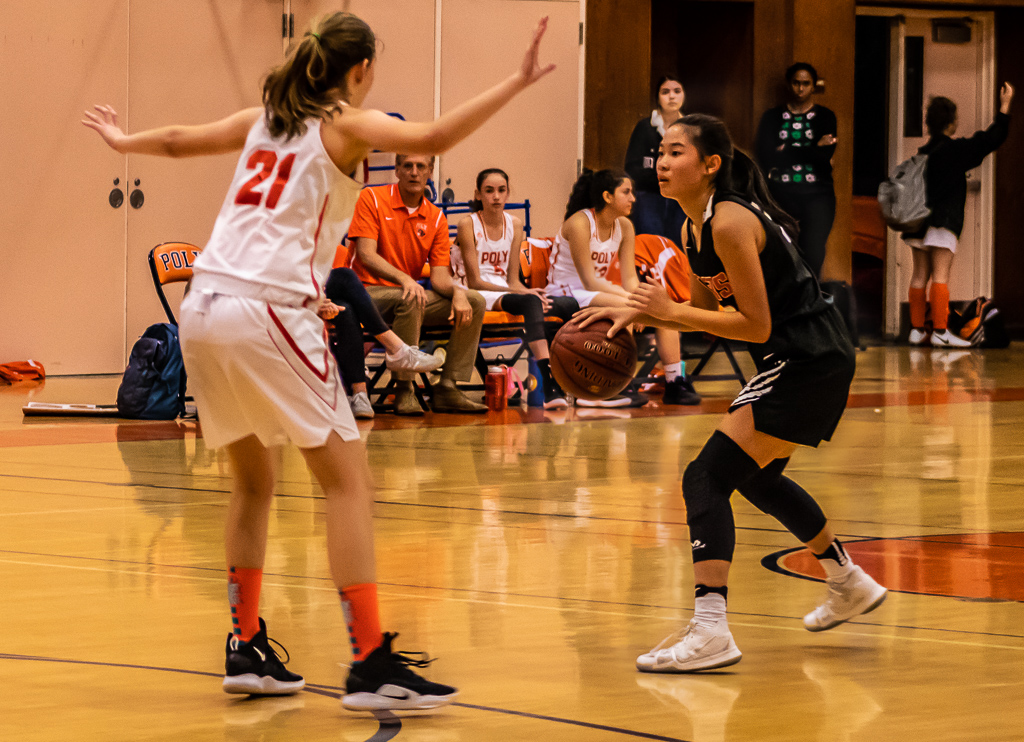 Junior Megan Yee surveys the floor in a recent game against the Polytechnic Panthers.

The Tigers finished the Arroyo High School preseason basketball tournament with a 52-35 loss to the Victor Valley Jackrabbits on Saturday night. South Pas lost its first two games of the tournament, before winning on Wednesday against the Arroyo Knights, 44-32. Although Victor Valley had previously lost to Rio Hondo League rival, Temple City, the game before, the Jackrabbits’ size advantages proved to be too much for the smaller Tigers to handle. With the injuries of 5’9” senior Lauren Kafkaloff, the team’s leading scorer, as well as the 5’8” standout freshman, Allysan Tse, South Pas had difficulties rebounding and finishing at the rim all night long.

South Pas was able to get off to a strong start with a 8-0 scoring run midway through the first quarter. Following a floater in the lane from junior forward Charlize Kruzic, the Tigers scored six points on the next position. A three pointer from Kruzic was followed by another three from junior guard Megan Yee after the Jackrabbits were called for a loose ball foul. Yee finished as the team’s leading scorer with 11 points. However, Victor Valley took a 22-20 lead into halftime after troubling the Tigers with its aggressive offensive rebounding in the second quarter.

In the third quarter, the Jackrabbits’ pressing defense began to trouble SPHS and Victor Valley was able to turn the Tigers’ turnovers into fastbreak points. Despite a strong defensive performance from senior Elaine Yang, the Tigers were unable to stop Victor Valley from scoring inside. A fastbreak layup from junior Sydney Sakamoto, along with a jumper from senior Kayla Zhang helped the Tigers remain within striking distance of Victor Valley, ending the third quarter down 34-30. However, Victor Valley’s length and athleticism in the the full-court defense wore down South Pas in the fourth quarter, and eventually lengthened the lead to 52-35 when the final buzzer sounded.

“Unfortunately, our offense unraveled in the fourth, but we played a solid first three quarters of basketball to hang close with a team that was much taller than us,” Yee, who was named to the all-tournament team, said. “We will be in the gym a lot over the next month and making adjustments before league play starts.”

The loss dropped the Tigers’ record to 3-10, which is unexpected for a team that began the year with aspirations of a deep CIF playoff run. South Pas will hope to right the ship against San Marino in 2019,  when league play begins on January 5th.