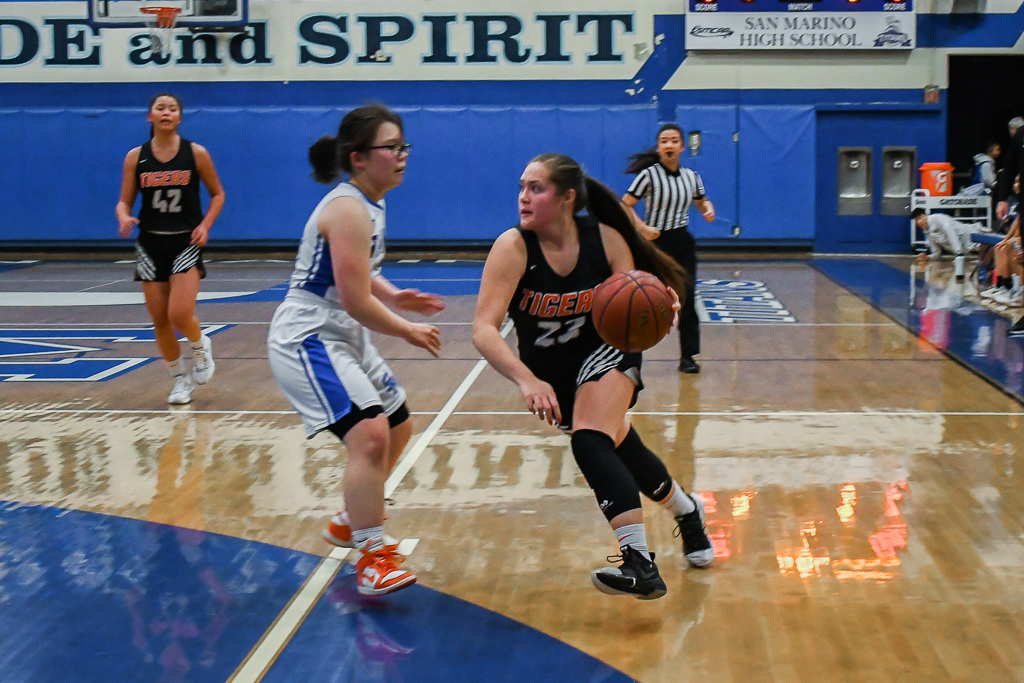 The Tigers finished second in the Rio Hondo League, behind the La Cañada Spartans.

Girls basketball easily defeated the San Marino Titans on the road with a stunning 71-24 victory in its final league game this season on Thursday, Feb. 6. The Tigers’ Rio Hondo League record stands at 6-2 in second place as they prepare to play in CIF.

The Tigers quickly jumped ahead in the first quarter. On the offensive side, senior Charlize Kruzic and sophomore Allysan Tse sunk their layups and jumpshots, never stepping off the gas pedal. On defense, senior Megan Yee kept the Titans down with aggressive defensive plays and forced multiple turnovers. The period flew past as the Tigers closed out the quarter ahead, 22-2.

The second period saw a greater resistance from San Marino. The Titans seized their opportunities to slip past the Tigers’ defense and score, but the visitors stayed well ahead. Sophomore Alyssa Chan, senior Emily Newhall, and Yee swished triples that pushed the score to 46-17 at the end of the first half.

The pace quickened in the third quarter as the Titan’s defensive plays increased in aggression. The Tigers were unable to finish some of the layups, and players from both sides were frequently knocked over in the flurry of the game.

Despite their almost-40-point lead, the Tiger’s offense never faltered. The team’s shooting accuracy and unwavering eye for the ball helped them widen the margin between the teams even more, until the final buzzer sounded and the Tigers defeated the rival Titans, 71-24.

“We did a really good job of pushing the ball, working together, and maintaining intensity throughout the whole game,” Newhall said. “Right now we are going to CIF and hope to give it our all and make it past the first round.”

The Tigers now await the CIF brackets as they gear up for playoff competition.