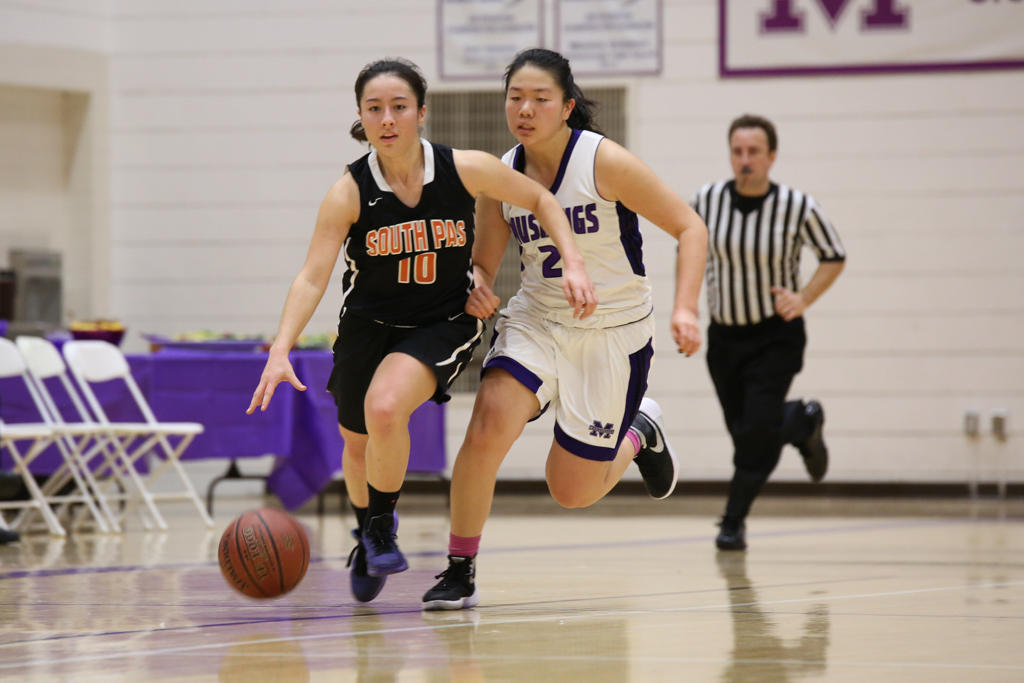 The varsity girls’ basketball team bounced back from its previous loss in an away matchup, picking up a 68-54 victory against Marlborough High School on Wednesday, January 6. The win brings the Tigers’ overall record to 6-3. Though South Pas was unable to alleviate itself with a substantial lead in the first half, the squad managed to earn a double-digit lead by the end of the game.

The Tigers were slow to gain momentum in the first half, similar to their previous matches. Marlborough battled back against South Pas to keep the score even, despite senior Kristen Kafkaloff being a powerful offensive threat to the Mustangs. Juniors Jade Lin and Juliana Tom also provided a strong offensive attempt to gain a larger lead. Both teams provided solid defense, as the score was kept fairly low by the end of the second quarter with the Tigers leading by one basket at 28-26.

South Pas soon found its stride in the second half, led by Kafkaloff who garnered 25 points overall for the Tigers. Lin and Tom were also key to the squad’s improved performance, accumulating 15 and 16 points, respectively. The Tigers’ growing intensity was too much for the Mustangs to overcome, and South Pas was able to gain a double-digit lead by the end of the third quarter. Junior Jalynne Li also contributed eight points to fuel the lead, and freshman Kayla Zhang drew many cheers from the crowd with her first layup of the season. Ultimately, despite displaying a solid performance, Marlborough was unable to catch up to the Tigers, and the game ended at a score of 68-54.

“We still have aspects of our game to work on, but we are definitely improving our overall team play,” Kafkaloff said. “One of our biggest strengths is that our scoring is spread out, and hopefully this continues in future games so that every player is an offensive threat.”

The Tigers next go up against Duarte High School in the Providence Pioneer Showcase on Saturday, January 9 at 4:30 p.m. South Pas looks to gain another win to improve its record to 7-3 before the beginning of league.