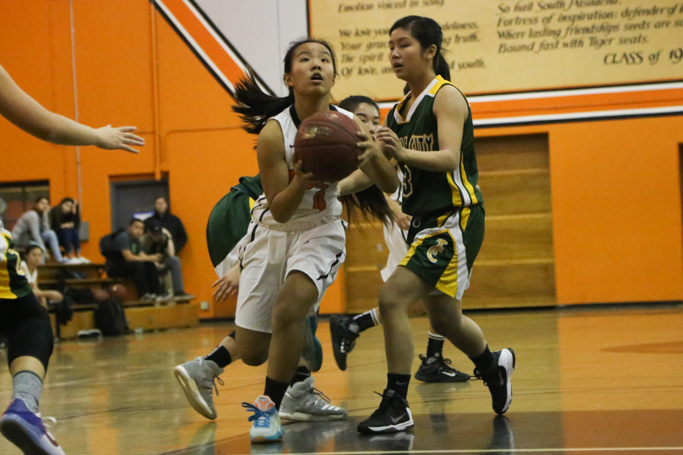 The girls’ basketball team demolished Temple City 50-21 in its first home game of Rio Hondo League play on Friday, January 13. This victory brings the girls’ overall record to 8-6 and league record to 2-0. A combination of constant offensive pressure and the Rams’ inability to capitalize on opportunities to score contributed to South Pas’ commanding win.

Senior captain Jade Lin immediately took possession and shot a three to begin the game. Though it bounced off the rim, senior captain Juliana Tom soon followed with a clean three pointer. Temple City was then fouled on a drive to the basket and made both the layup and the free throw to put the score at 3-3. Undeterred, the Tigers continued to pressure the Rams’ defense. When the visitors were able to dribble through South Pas’ defense, however, they could not find the basket. Sophomore Lauren Kafkaloff earned the last points of the quarter off of a layup to put the score at 15-6.

Jalynne Li gets past her defender and shoots a layup.

The second quarter resumed with an awry Temple City shot, and the Tigers took advantage of the error to pass the ball down to Kafkaloff, who easily scored. South Pas’ lead steadily grew, fueled by strong plays from Tom, senior captain Jalynne Li and junior captain Tiffany Holmes. The girls strung together quick, neat passes and dribbled past the defenders’ flailing arms and planted feet with ease. The Rams were able garner a small number of points off of free throws and occasional breaks but were unable to match the Tigers’ superior playing style. After an opposing player gained possession of the ball, Lin stepped in to swiftly steal it and attempt a shot before the buzzer rang out. Though the shot missed, South Pas sat comfortably in front with a 28-11 lead going into halftime.

Li opened the third quarter with an impressive floater, and Holmes sunk a free throw soon after. The Tigers struggled to consistently make shots, despite several opportunities. However, they did limit the Rams to a lone three pointer throughout the entire quarter. Sophomore Flannery Clark skillfully faked out her defenders to make several drives to the basket. Li, Lin, Kafkaloff, and Tom weaved around the other team, and were fast to recover lost possessions. Junior Naomi Kruzic had an impressive block of a Ram pass that allowed South Pas to connect and find Kafkaloff free under the basket. The quarter came to a close after Temple City sailed a shot towards the backboard in a last-ditch effort to score.

The Rams put away two free throws at the start of the fourth, and South Pas suffered a brief scoring drought where none of its shots would fall. This dry spell did not last, however, as Clark sank a three to shift the momentum back into the Tigers’ hands. The visitors were visibly frustrated, causing more aggression on their defensive end, thus giving South Pas free throw opportunities. The starting five were rotating on and off the bench due to the strong lead, allowing a few substitute players to clock in minutes. Sophomore Kayla Zhang garnered the Tigers’ final two points with a layup. After a Temple City free throw, South Pas took and rebounded multiple shots before Kruzic ran out the clock to conclude the game at 50-21.

“We’re happy that we came out and dominated, and even though we did have some areas that need to be improved on, we are very satisfied with our performance,” Holmes said. “Defense is a big factor that we need to improve on as we need to stick with our man and not commit as many fouls. However, we’re very confident that we will be able to beat San Marino, especially with the way we’ve been playing on offense.”

The Tigers next face off against their rival San Marino Titans at home on Wednesday, January 18, where they look to earn another league win.

School board approves plans for future math building at SPHS