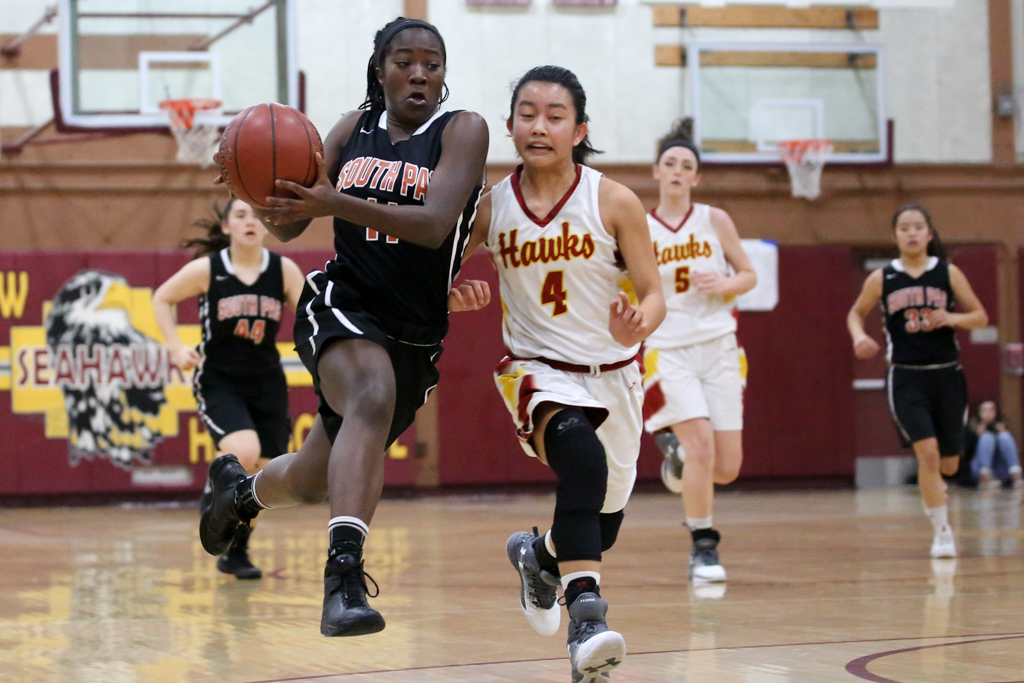 The girls’ varsity basketball team was victorious in its CIF Division 2A debut with a 52-45 away win against Ocean View on Thursday, February 16. The Tigers, twentieth in playoff predictions, faced off against the tenth-seeded Seahawks, who boasted a 21-5 overall record and matched South Pas’ 8-2 league record. Despite missing several opportunities, South Pas still managed to push through and claim the victory.

Ocean View quickly won the tipoff to start the first quarter and swiftly scored the first basket. The Seahawks soon stretched their lead to 7-1, with the Tigers’ only point coming from a free throw from senior captain Jade Lin. South Pas was plagued with missed threes and layups, unable to seal those points. However, momentum shifted once senior captain Juliana Tom sank two free throws. Senior captain Jalynne Li followed with a three, and junior captain Tiffany Holmes scored to tie the game 7-7 off of a pass from Tom. Ocean View responded with another basket, and after other attempts from South Pas, junior Naomi Kruzic hit a three to give the Tigers a one point edge. By the end of the quarter, however, the teams were tied at 12-12.

Sophomore Kayla Zhang blows by her defender and pushes toward the basket.

The second quarter went by in a similar fashion. Once the Seahawks gained a small lead, the Tigers battled back to close the margin and pull ahead. Li, Lin, and Tom were the large contributors to this offensively. Li and Tom continuously drove to the basket and created several opportunities for other teammates. Sophomore Lauren Kafkaloff, still recovering from an injury, found the basket once as well. Defensively, Holmes prevented Ocean View’s best player from scoring many times. However, this was not the Tigers’ best game of the season. Several awry passes caused turnovers and shots continued to not fall throughout the match. In the final seconds of the quarter, the Seahawks struggled to maneuver around the South Pas defense and lobbed a shot that would miss right as the buzzer rang, ending the half 26-23.

Clark immediately opened the third quarter with a drive that would ultimately end up being blocked by Ocean View. Possession went back and forth before the Seahawks finally made a shot. Soon, the teams were tied at 27-27, but the Tigers pushed through to garner eleven points before Ocean View scored again. South Pas’ defense was key in this quarter, limiting the opposing team’s opportunities. Clark, Li, and Tom were recognizable as the Tigers’ dominant offensive forces, and Holmes continued to shut down Ocean View’s best player. The third quarter finished at 38-29.

The beginning of the fourth quarter started well for the girls as they continued to stretch their lead. Holmes, Lin, and Tom boosted South Pas up with baskets, widening the gap between the girls and Ocean View. Midway through, however, the Seahawks drew scarily close to the Tigers at 45-43. South Pas became flustered, shanking passes and throwing away shots, and it seemed like Ocean View might just make a dramatic comeback. The Tigers eventually kept their composure, and after the initial panic, began to relax and run out the clock. All the Seahawks could do was foul the girls as the clock ticked down. South Pas scored its last points off of the awarded free throws. Li sank two consecutive free throws before Ocean View hurled the ball across the court in a final, ineffective effort to score, and the Tigers took the 53-45 win.

“I think in the beginning after seeing that 7-1 deficit, it was clear that we were a little jittery because it was the first round of CIF. But, we started getting into rhythm and playing our game,” Li said. “The main thing I hope to emphasize next game would be rotating the ball quicker as well as off the ball movement. There were moments this game where our offense was a bit stagnant, so as long as we are constantly moving around, our speed will tire out our opponents.”

South Pas faces the second-seeded Aliso Niguel in the second round of CIF on Saturday, February 18 at the Wolverine’s home court in Aliso Viejo. Aliso Niguel holds a 17-6 overall record and 8-0 league record compared to the Tigers’ 15-9 overall record. The Wolverines are coming into playoffs fresh off of a bye game. South Pas, undeterred, looks to advance.