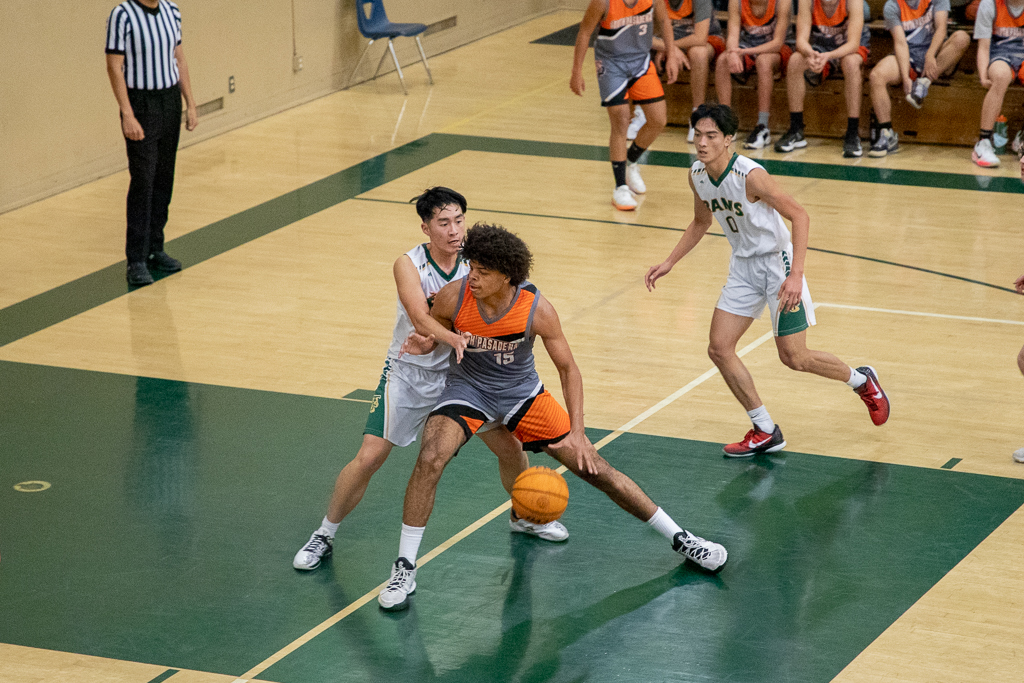 The Tigers have one remaining league game before they start their CIF run in Division 3A.

Boys basketball defeated the Temple City Rams 61-50 in a comfortable away game on Wednesday, Feb. 2. Even though the Tigers were able to secure a win, their shaky first-half shooting plagued them once again.

A constant challenge throughout the match was South Pas’s quantity of shots outweighed the quality. Right off the whistle, the Tigers won the tipoff and senior forward Jonathan Guy darted down the court, attempting but missing an early two-pointer. From the rebound, the Rams charged the key, only to be intercepted by the Tigers.

The rebounds were where the players showcased shooting styles. Towards the end of the first quarter, senior guard Dillon Akers gained control of the ball, passed it to senior guard, and forward Ezekiel Pannell, who then missed his shot. But from the rebound, Wayans was able to try his luck and garner a two-pointer.

On the turnover from the basket, Akers sank a two-pointer. Seconds later, Pannell landed a smooth three. With a foul shot and a three-pointer, the Rams were able to bring their tally to eight points. However, with Akers landing a three-pointer, the Tigers moved their score to 20 points by the end of the first quarter.

The second quarter’s familiar patterns from previous games emerged. The Tigers amassed a substantial first-quarter lead, so the second quarter was not as high scoring. The Rams had an early misstep, severely undershooting an early basket, but their foul shots brought them an extra point. This phenomenon was equally beneficial for the Tigers. Even more of a testament to the power of the rebound, Wayans missed a close-range dunk but rebounded for two points.

The Rams were able to score many close-range shots, mainly due to the lack of Tiger interference. The Tigers would consistently crowd around the Rams but let them get close to the basket for two-pointers. 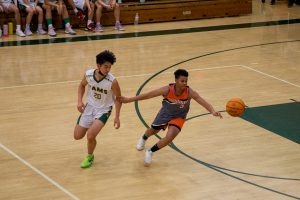 However, South Pas still managed to rack up quite a bit of points. For instance, Guy and Pannell scored two and three points respectively. As the Rams continued their layup streak, the clock ran down. Quarter two proved to be more enticing for Temple City, where they crept up to amass 26 points compared to South Pas’s 35.

Half-time was a time for reflection and a stellar Ram half-time show. When the second half began, the Tigers stormed the court and gained four points off the bat. As the Tigers deliberated and ran down the shot clock, Pannell landed another three-pointer. The Tigers continued their constant attempts at the basket, only seldom succeeding. After a rebound, Guy made a close-range basket after Wayans had gained control. Additionally, Pannell’s multiple three-pointers helped cinch the Tiger win.

But Temple City wasn’t just going to let the Tigers hog the key. On par with South Pas, Temple City attempted many failed layups. Towards the end of the third quarter, the Rams had regained a semblance of a chance with a two-pointer and three-pointer at the buzzer.

By the end of the third quarter, the game was at 56-41 for the Tigers.

With such a considerable lead, the Tigers briefly rotated the B-team in for the start of the fourth quarter. Senior guard Jaequon Santos placed his entire being between his counterpart and the ball. Additionally, his passing was excellent. The Rams still managed a two-pointer.

The fourth quarter was relatively low-scoring. South Pas missed their shots and Temple City was able to rebound to three-pointers by blowing past the South Pas defensive line. As the game began winding down, Temple City lands a final two-pointer, bringing their score to 50 points. But South Pas had edged them out with 61.

The Tigers maintained a comfortable lead in all stages of the game. Although this lead was challenged occasionally, mainly when the Tigers would lose control of a dribble or a pass.

“I think going on, it was a good learning game because now we know what to do in future games.” Ezekiel Pannell said, “we tried to do our own thing in the game and from now on we will work as a team. We are excited to play San Marino on Friday in league championships.”

The Tigers will play their final league game on Friday, Feb. 4 at San Marino.