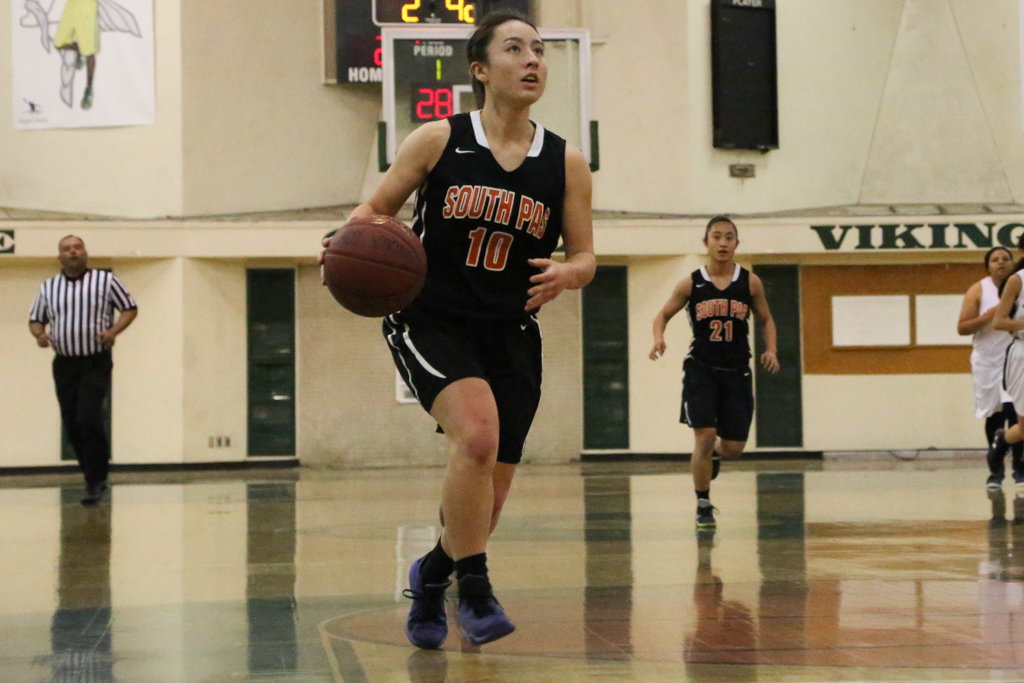 The girls’ basketball team defeated the Blair Vikings 53-15 in an away matchup on Wednesday, February 3. The Tigers’ victory brings their league record to 6-1 and overall record to 12-5.

Blair scored the first basket of the game, but the Tigers quickly retaliated with a basket from sophomore Tiffany Holmes. South Pas soon gained a small lead, but was unable create a large difference in points between the two teams due to a slower style of play. Holmes and juniors Jalynne Li and Juliana Tom would be the only Tigers to score in the first quarter as multiple shots from various players weren’t falling. The quarter would end at a score of 10-4 after many attempted shots from both teams.

The Tigers gained more offensive opportunities in the second quarter, which opened with another basket from Holmes. Junior Jade Lin followed by sinking two consecutive free throws to put the score at 14-4. South Pas continued to increase its lead against the Vikings, who couldn’t reach the Tigers’ level of play. In Blair’s frustration, it grew very physical, especially against Holmes who found herself constantly under attack. Senior Kristen Kafkaloff would garner the final Tiger points of the half, which finished at 23-7.

Freshman Lauren Kafkaloff opened the second half with a basket, though it was soon followed by a free throw from Blair. Tom lashed back with a layup, helping the Tigers find their rhythm. South Pas picked up its intensity midway into the third quarter, boosting its lead to a 37 point gap by the time the buzzer rang at 45-8.

The Tigers continued to put high pressure on both sides of the court, limiting the Vikings’ offensive opportunities. Lin and L. and K. Kafkaloff were the only South Pas scorers in the fourth quarter. Throughout the quarter, however, Blair would be able to break through the most it would during the game, amassing seven points. The Tigers ran out the clock to finish the game at 53-15.

“Blair definitely came out stronger than last time, and we played down to their level especially in the first quarter,” K. Kafkaloff said. “A lot of our shots weren’t falling so that was a reminder to us that we need to keep focusing on defense because we can’t always depend on offense.”
The Tigers’ next game is at 5:15 p.m. on Friday, February 5 at home against La Cañada. The Spartans currently sit at first place while South Pas is in second, and a victory for the Tigers would tie the two teams in the top spot. The Tigers previously fell 72-42, but are confident that they will give a stronger performance in the next matchup. The win would bring to South Pas’ league record to 7-1 and overall record to 13-5.