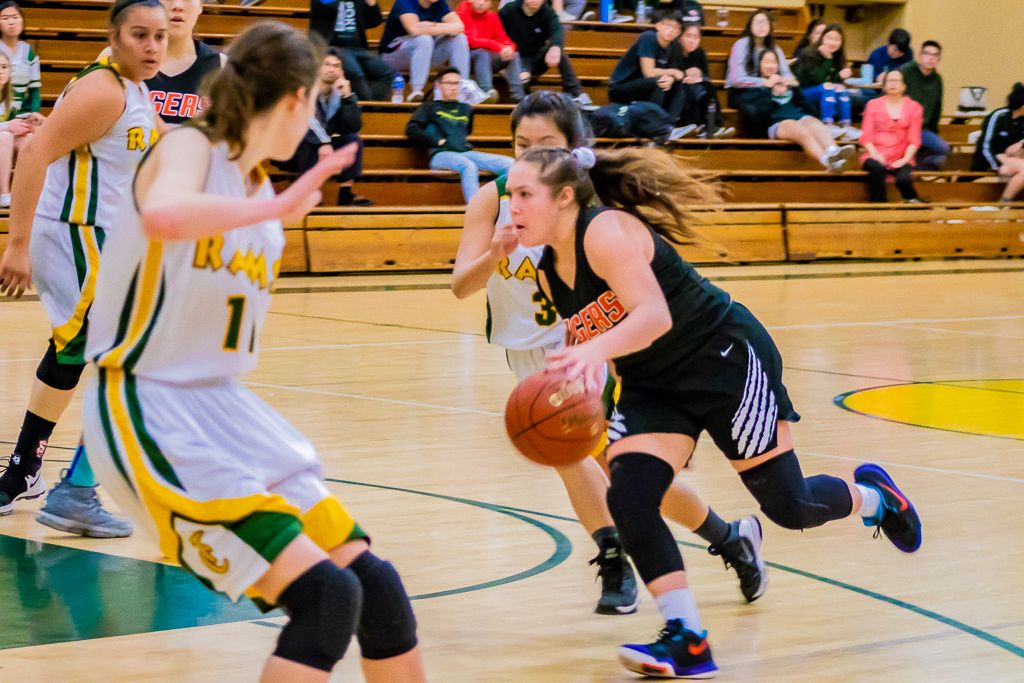 Junior Charlize Kruzic drives to the basket during the Tigers' beatdown of Temple City.

Girls’ basketball eased their way to a 54-32 blowout on the road over the Temple City Rams on Tuesday, January 8. The Tigers’ superior organization and communication allowed them to command the court throughout the entirety of the game.

Within the first quarter, South Pasadena’s control over the game quickly became apparent. Seniors Kayla Zhang and Lauren Kafkaloff, junior Megan Yee, and freshman Allysan Tse each contributed to a strong 11-0 lead early in the quarter. The defense also shone, only allowing two points to slip through the cracks while the Tiger offense continued to rack up points, resulting in a 15-2 score by the end of the quarter.

The already aggressive game picked up steam in the second quarter, with the Rams eager to mount a comeback against the Tigers. However, the points Temple City managed to pick up were easily surpassed by South Pas’ own free throws and points scored by seniors Flannery Clark and Zhang. The quarter closed at 27-8, heavily skewed in favor of South Pasadena.

In the last half of the matchup, it was clear that the Tigers would be come out with a victory. However, the team continued to pressure the Rams with aggressive offense and well-placed shots, ending the game with a stellar 54-32 win.

“I’m really happy with how we did today,” said Zhang, “We had great ball movement and and even though we built an early lead, we kept at it and stayed on the gas pedal until the end.”

The girls will look to extend their untarnished 2-0 league record in an away game at La Cañada on Friday, January 11.