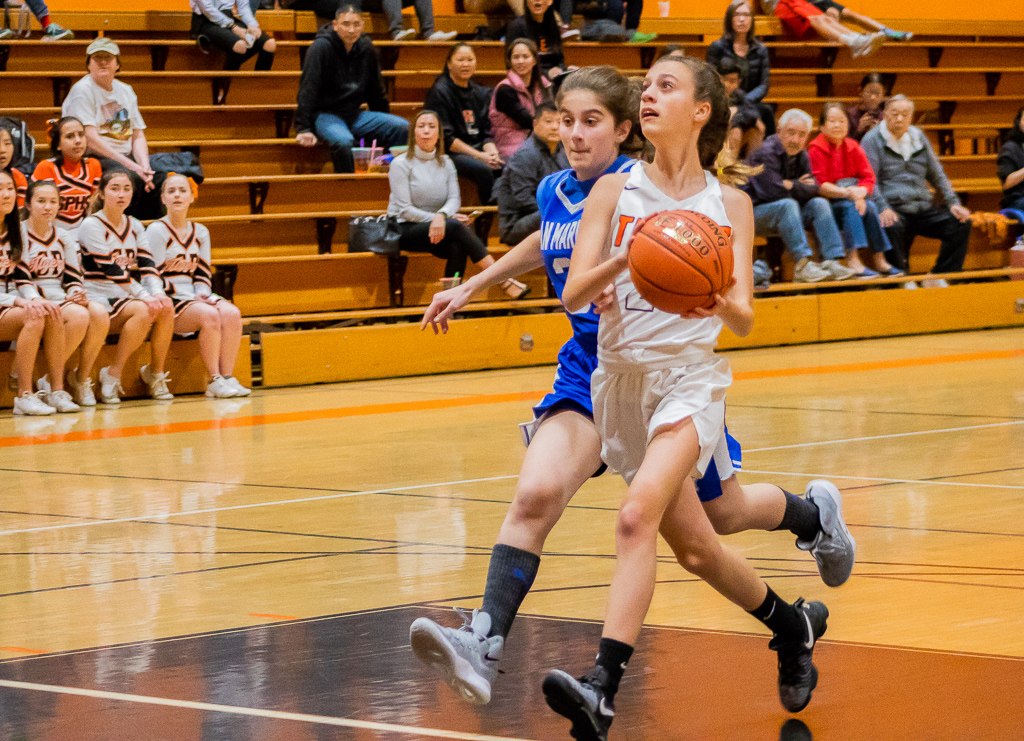 Junior Emily Newhall strides to the basket in the Tigers' 37 point victory.

The girls’ basketball team triumphed in yet another landslide game in the SPHS gym on Tuesday, Jan. 22, defeating the San Marino Titans 67-30. After defeating the Titans earlier in the season, the Tigers’ quick, precise ball movement and energy on the court was able to overwhelm the opposition once again.

Senior Flannery Clark landed a three pointer with less than a minute elapsed on the clock in the first quarter, establishing momentum the Tigers would carry through the rest of the game. The constant attacks on the scrambling Titan defense would allow the Tigers to score several more times within the quarter, while well timed blocks under the Tiger hoop conceded a mere three points to San Marino, resulting in a 22-3 lead after the opening quarter.

The Tiger’s upward trend continued into the second half of the matchup. In the final quarter, San Marino mounted a final bid for a comeback, scoring multiple times in quick succession. However, scoring from juniors Aiko Sudijono and Emily Newhall crushed the Titan effort, bringing the victory to a close.

“This was a really good game to get our energy up for our next game, which is probably going to be our biggest game this season,” said junior Megan Yee. “We will definitely be looking to pick up our intensity on court even more between now and then.”

The Tigers will be looking to keep their positive momentum going in their next game at home against La Cañada on Thursday, Jan. 24. The Tigers previously lost to the Spartans 56-37 earlier in the season and will be seeking revenge against the first place squad.