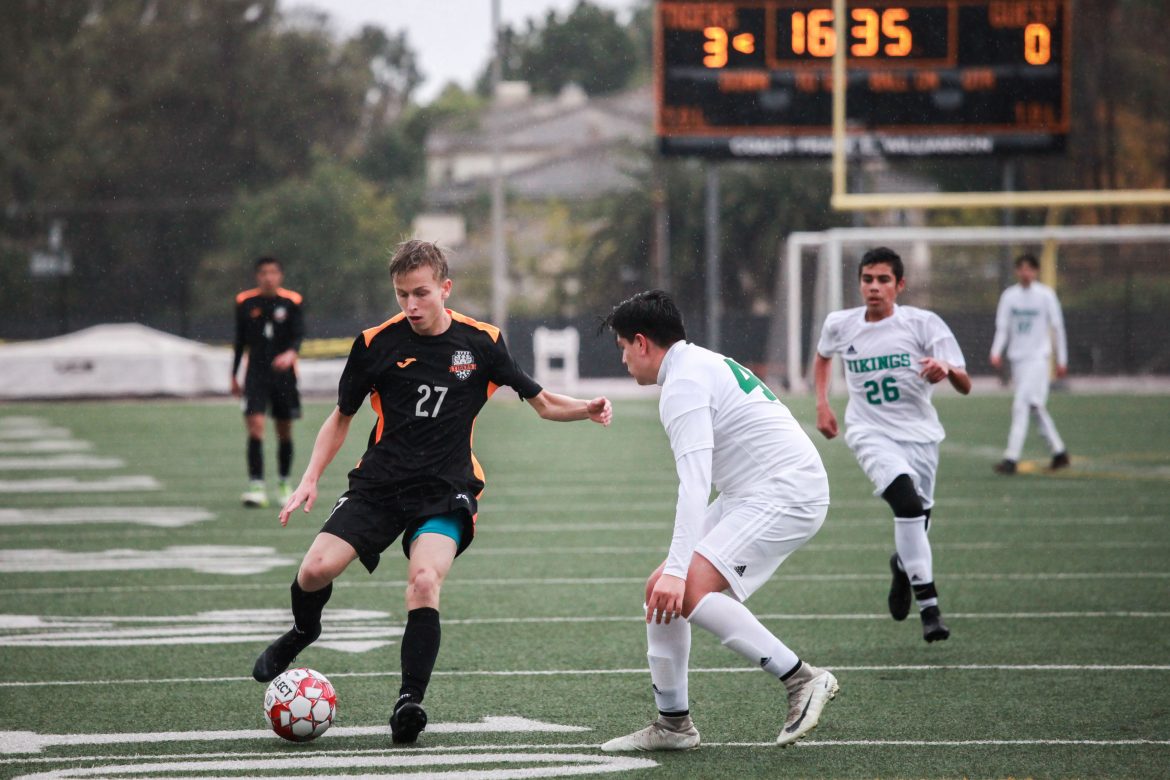 Boys’ soccer fell to the Monrovia Wildcats 2-1 at home on Friday, January 18 in a close league matchup. The brutally hostile opposing offense and widespread unsportsmanlike play from the Wildcats produced one of the most heated games of the year, resulting in the Tigers’ falling to 2-3 in .

Both teams were eager to gain early ball control as the first half began. The Tigers triumphed in the match’s early struggles and gained significant ground within the first minute. The Monrovia offense quickly responded and attempted to shut down the advance, fouling sophomore midfielder Caleb Lee in the process. This proved to be a crucial mistake for the visitors, as sophomore Reo Snyder claimed the Tigers’ first goal off the ensuing free kick only three minutes in. Unfortunately, this proved to be the only gain for the home team throughout the match. The Wildcats immediately cracked down on offense to keep ball movement in their favor, becoming more unruly and hostile in the process. The Tiger defense was unable to hold back their opponents’ aggravated assault and eventually dropped a goal, evening the match at one. The teams went back and forth unsuccessfully for the remainder of the half, with each offense constantly taking any opportunity to make a run on the goalpost.

The second half saw the continued hostility of the Monrovia team, and the Tigers struggled early to hold back their advance. A Wildcat midfielder was given an opening early into the half and scored the visitors’ second goal, leaving South Pas in a tight spot. Nevertheless, the Tigers rallied and utilized small ball to keep possession, with seniors Danny Safaoui and Sage Pierone being among those to shine in the effort. These passes and defense did little to create movement, however, and the lack of South Pas aggression gave the Wildcats ample opportunity to retaliate. Throughout the rest of the half, the Monrovia offense got a lot more hands-on, frequently shoving the home defenders to win over multiple throw-ins. The Tigers’ momentary control of the field crumbled under this offensive tactic and were once again forced to fall back. Although a considerable number of the Monrovia players were given yellow cards for their overly-hostile behavior, many of their elbowings and pushes were not caught by refs. These actions later escalated into shouting and a near fistfight between two players. The first red card of the match was issued to a Wildcat with only minutes left on the clock.

The match ended 2-1 in favor of the visitors, sealing the Tigers’ third league loss. The team will have a chance at revenge against Monrovia on Saturday, January 26, but will first play rival San Marino in a road match on Tuesday, January 22.

In a face-off against San Marino baseball...

Photos of the Month – March