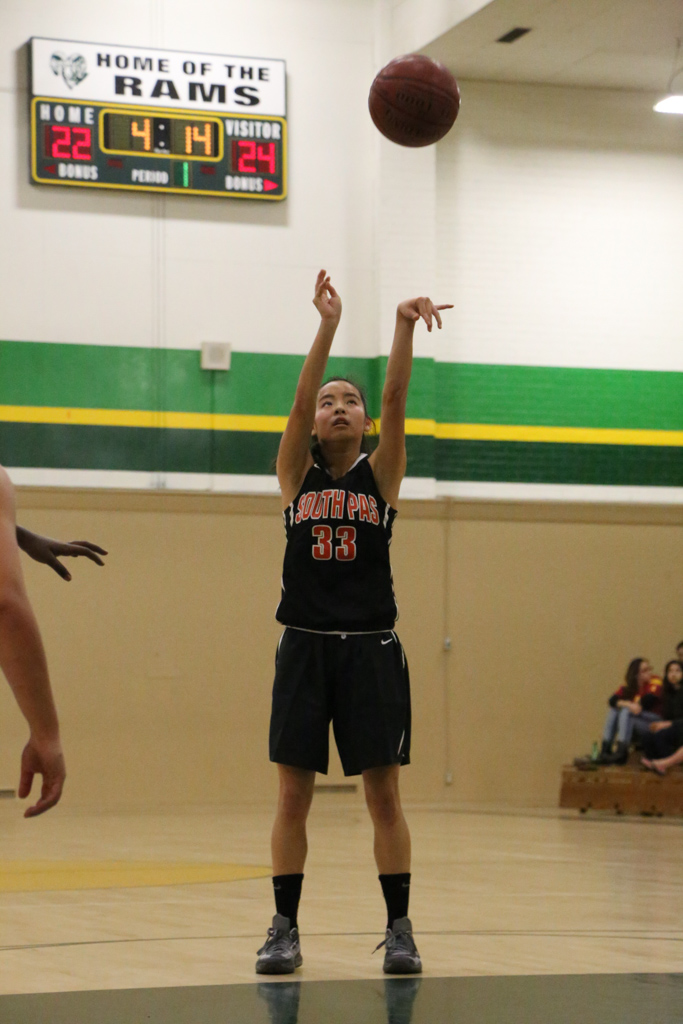 The girls’ basketball team participated in the South El Monte-Mark Keppel Tournament, playing four games spanning from Saturday, November 26 to Saturday, December 3. South Pas was plagued with injuries and illness from several players and competed against several Division 1 schools throughout the tournament. The girls finished the tournament with a 2-3 record and placed sixth out of ten teams in their division.

The Tigers opened their season against Mark Keppel High School on Saturday, November 26 and fell 58-39. The team gave a resilient effort despite being worn down by sickness, and key player sophomore Lauren Kafkaloff played through an injury. However, South Pas ran into more difficulty when senior captain Juliana Tom and junior Tiffany Holmes got into foul trouble, which led to the two starters being pulled out early. However, on Tuesday, November 29, the Tigers demolished Price High School 57-13. South Pas was able to rebound from its previous loss, with Tom acting as the leading scorer and a threat on defense. Senior captain Jalynne Li also contributed to the Tigers’ strong offense with her performance as point guard.

“A lot of the games we’ve played have been a struggle, and we really didn’t want the results to come out the way they did,” Holmes said. “I think one of the things we need to work on is building team chemistry on the court. Because this is a new team and this is our first time playing with each other, it was somewhat difficult.”

In the team’s third game, it suffered a 61-39 loss to St. Paul on Wednesday, November 30. The Tigers struggled defensively, allowing the points scored against them to create a wide margin between St. Paul and South Pas’ respective points. Again, the Tigers bounced back on Friday, December 2 with a strong 51-26 victory over Garfield High School. This win was also helped by the return of senior Jade Lin, who had been recovering from an ACL injury. Despite this win, the Tigers’ luck fell short against Arcadia, whom South Pas played on Saturday, December 3. South Pas narrowly lost by six points at a score of 42-36 to take sixth place.

“We hope that in our upcoming tournament things will be different in the sense that we will play harder in order to win more games,” Holmes said. “One of the team’s biggest weaknesses is defense against our opponents. Even though it is a weakness, we do recognize it and hope to better ourselves so that we can play the best we can.”

The Tigers next participate in the Ella Hudson Classic Tournament, hosted by Duarte High School. South Pas opens against West Covina High School on Monday, December 5, where the girls look to make their record 3-3 with a win.