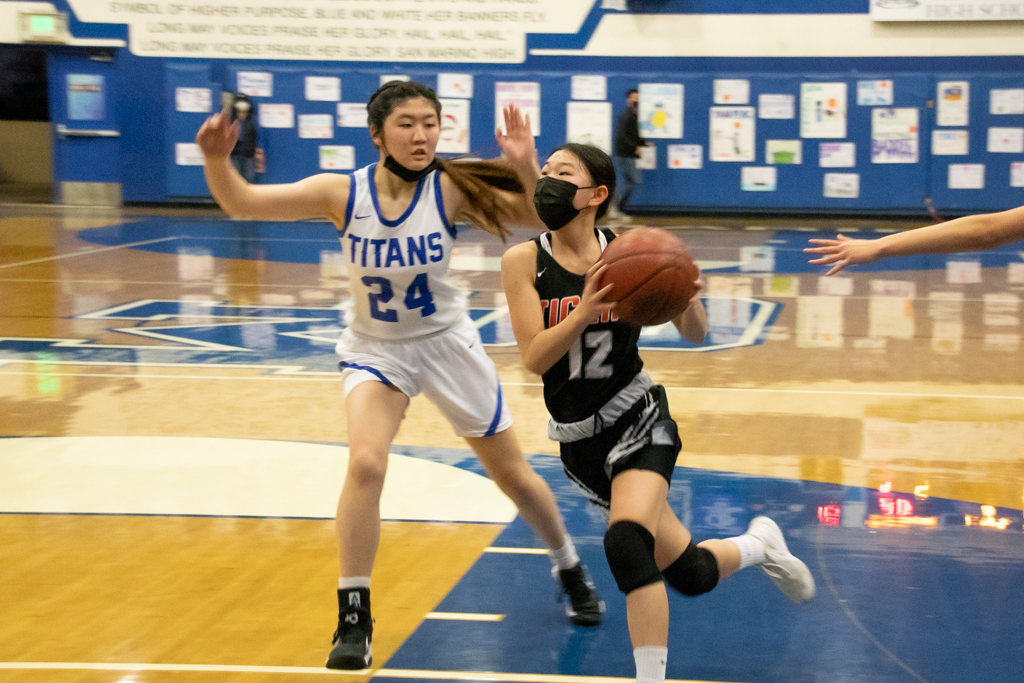 The Tigers capitalized off the Pirate's fouls to take home the win on Wednesday night.

Girls basketball will continue on to the CIF Division 2A quarterfinals after narrowly defeating the Paramount Pirates 70-66 in a playoff game on Wednesday, Feb. 16.

The Tigers started off strong in the first quarter, intercepting the ball after Paramount won the tipoff. Their trapping defense prevented the Pirates from scoring in the first four minutes. However, Paramount quickly proved to be a challenging opponent as its swarming defense blocked several of South Pasadena’s attempts to score, forcing the Tigers to dodge their way to the basket.

Sophomore point guard Dylan Tse succeeded in bypassing this entirely, sinking a 3-pointer nearly half a court away. Soon after, senior power forward Allysan Tse weaved her way through the opposing defense to make a layup, followed by a 3-pointer. The Tigers were able to keep Pirate offenders away from the basket for most of the quarter until they started advancing in the last three minutes of the quarter.

In the tense environment, multiple players from both teams were knocked to the floor, but South Pas was able to maintain their lead, ending the first quarter 20-10.

The second quarter quickly foreshadowed what a close game this would be as Paramount furiously began closing the gap. It seemed as if the Pirates were attempting to make this game look like a football match, as they frequently tried and succeeded to knock the Tigers down to the ground.

At one point, junior small forward Lotis Shoun was pushed to the ground hard but bounced back up to make multiple 2-pointers and a free throw. Each side struggled to break through the other’s defense, though the Tigers were intercepting passes and taking rebounds across the court.

Adapting to the opponent’s strategies, South Pas began mirroring Paramount’s defense, swarming and blocking the Pirates into making wild shots. This allowed the Tigers to take the lead in the second quarter as senior small forward Alyssa Chan landed an impressive basket, ending the first half 34-29 in the Tigers favor.

The third quarter was even more physical, as both teams knew this next quarter would shape the winning team. The Pirates came out strong off the buzzer, leaving the Tigers scoreless for the first minute of plays.

The Pirates managed to tie the game before pushing to the lead. Quickly in response, South Pas picked up the pace in the last few minutes. The combined efforts of D. Tse’s and Shoun’s array of 2-pointers and free throws allowed them to barely scrape ahead 51-48 at the end of the third.

Both teams found themselves in a similar position as last quarter; both nearly tied and eyeing the win. South Pas jumped ahead as sophomore point guard Jamie Rain Kim, A. Tse, and D. Tse each successfully broke ties. Meanwhile, the Tiger defense aggressively blocked the Pirates. The game was neck-and-neck.

The game came down to the last thirty seconds as the Pirates were right on the Tigers’ heels 66-64. Each time South Pasadena scored, so did Paramount and no one was able to let their guard down. With ten seconds left on the scoreboard, a Paramount player was fouled for pushing A. Tse down, and she earned two vital free throws. She had no trouble sinking both, and she continued to run down the clock until the game ended 70-66.

“Right now it feels so good [to get this win with my team],” A. Tse said. “In the beginning, I was so nervous, I think everyone could tell on the court that I let the nerves get the best of me in the beginning. But I noticed that my team needed me and I just needed to get out of my head.”

Girls Basketball will continue on their CIF run, looking to claw out Brentwood in the CIF Division 2A quarterfinals on Saturday, Feb 19 on the road.