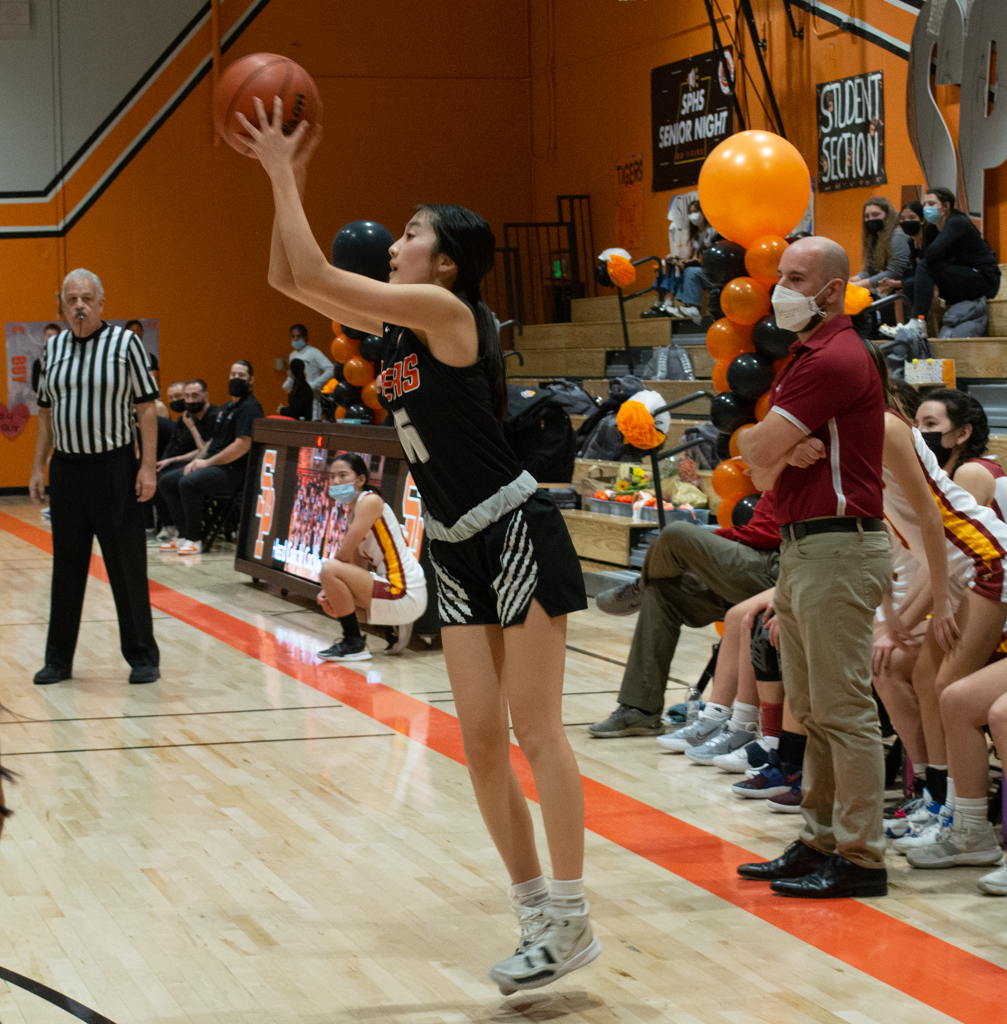 The Tigers are set to compete in the CIF Division 2A quarterfinals on Saturday, Feb. 19.

Girls basketball demolished the Arcadia Apaches 71-47 in the first game of the CIF Division 2A playoffs on Saturday, Feb. 12.

The Apaches jumped to an early lead, sinking multiple 3-pointers through avoiding the Tigers’ defense with long-range shots. However, the Tigers quickly adapted, swarming Arcadia’s players, blocking passes, and forcing them into making wildly unsuccessful shots.

Senior power forward Allysan Tse dominated the court with an incredible offense, sinking numerous 2-pointers, breaking through Arcadia’s defense, and saving the ball off of rebounds. After the Apaches attempted to charge down the court, A. Tse intercepted the ball and took it the length of the court, scoring another 2-pointer.

The first quarter was filled with frequent skirmishes and near-misses from both teams as each team struggled to break past the others’ defensive line. On multiple occasions, the ball was taken up and down the court after rebounds and missed passes. The Tigers eventually managed to lure Arcadia’s defense away with several quick, disorienting passes, which allowed sophomore point guard Jamie Rain Kim to score. After managing to edge their way into the lead, South Pas ended the quarter with a score of 16-10.

The Tigers’ defense continued to hinder Arcadia well into the second quarter as they began upping the aggression to push players into stepping out of bounds, or knock the ball out themselves. After almost two minutes with neither team scoring, junior small forward Lotis Shoun broke the drought with a 2-pointer. Soon after, sophomore point guard Dylan Tse sunk two 3-pointers from seemingly impossible angles on the sides.

The teams clashed yet again over the ball, as players on each team stole and lost the ball in rapid succession. D. Tse ended the standstill, recovered the ball after multiple missed shots and intense interference from Arcadia, scoring a 2-pointer. South Pas continued to run down the clock and prevent Arcadia from stealing the lead, and the first half ended in the Tigers favor with a 30-21 score.

The third quarter spelled “game over” for the Apaches, as the Tigers immediately blocked six of their attempted shots back to back, essentially bringing Arcadia’s scoring to a standstill. Kim managed to swipe the ball, then scored a 3-pointer quite a distance away from the basket.

South Pas’ defense only got stronger, as they began making increasingly strategic blocks and interceptions, giving the offense space to make their moves. At one point, D. Tse stole the ball out of the air from an Arcadia defender and sank a 2-pointer.

The Tigers were on a roll as A. Tse scored two 3-pointers, as well as a 2-pointer after senior small forward Alyssa Chan took the ball down the court. Chan later snatched the ball from Arcadia’s hands, and sank another 2-pointer, ending the third quarter with a towering 30-point lead of 59-29.

The final quarter was the most contentious yet, but by this point, the Apaches had no chance at victory. Even as they managed to block some of the Tigers’ shots, they were overwhelmed by the sheer force of South Pasadena’s offense.

Though Arcadia managed to score almost twenty points in the quarter, they were unable to close the gap as the Tigers continued to score. South Pas showed no signs of slowing down, as senior point guard Isabella Alfonso sunk a 3-pointer within the first thirty seconds of the buzzer, and sophomore shooting guard Yuzu Harada took a page out of Arcadia’s book by scoring a 3-pointer over their defense. The Tigers ran down the clock, and their win was solidified with a twenty-four point lead of 71-47.

“We want to get that banner in the gym that says CIF or even state champions,” A. Tse said. “I think our team right now is special and we’re capable of going far.”

The Tigers are set to play in the second round of CIF Division 2A playoffs on Saturday, Feb. 19, and the opponents have not yet been named.

Boys basketball edges out Indian Springs in CIF opening round