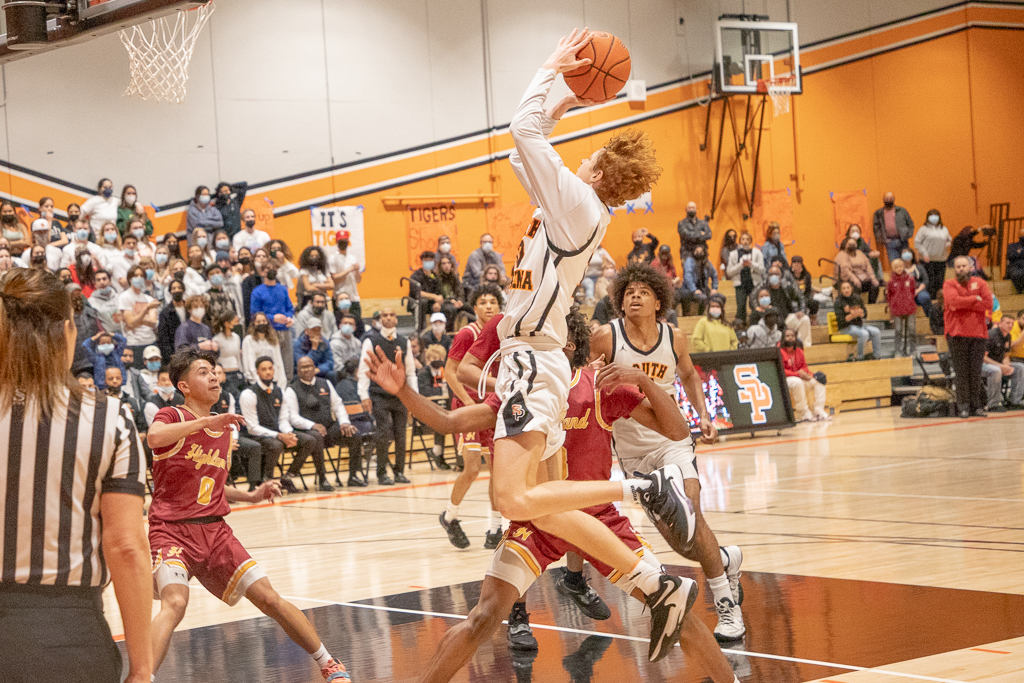 In a grueling fourth quarter, the Tigers struggled to keep up with the Bulldogs free throws, eventually leading to the 54-50 loss.

Boys basketball lost to the Highland Bulldogs 54-50 in its second and last playoff game of the season. In a game that started out with many missed opportunities and turnovers, the Tigers roared louder than ever in their second half gameplay. Unfortunately, the noise could not drown out their messy fundamentals.

The Tigers won the tipoff but quickly lost control to the Bulldogs, who then failed to land a basket. Following this, the Tigers attempted their basket, which was unsuccessful. South Pas continued their man-to-man defensive strategy.

Highland rushed down the court in a fast break and converted a layup. Then, senior center Sage Wayans lost the ball. This allowed the Bulldogs to charge across the court to score once again. Wayans redeemed himself with a field goal off an assist from senior guard Jonathan Guy. The Tigers trailed 6-2 early.

The Bulldogs had a highly successful defensive game plan. In one instance, they thwarted senior guard Dillon Akers’ shot attempt, leading to a breakaway and a basket of their own. Tiger hesitancy plagued their first quarter gameplay, often running down the shot clock and losing possession of the ball. Highland was mostly unsuccessful in their three-point attempts but maintained a solid lead over South Pas.

Coupled with their six-point lead, the Bulldogs also landed their free throws, rounding to a total of 10 points. The Tigers had a chance to complete one of their two free throws.

The Tigers resorted to physical defense, intercepting the ball but failing to take advantage as their charges towards the basket fell short. Guy managed to land both of his foul shots, putting the Bulldogs ahead 10-5. After a prolonged passing rapport, Wayans was able to land a field goal. The Bulldogs were able to counter by scoring another basket following that.

South Pas seemed to be plagued by slippery fingers, constantly losing control of the ball. Their opponents had the same issue, albeit at less crucial moments. By the end of the first quarter, the Tigers were down 12-7.

Quarter two started with a foul shot, with Wayans sinking both of his free throws, and put up another successful shot attempt. Breaking through the Bulldog’s full-court press, Akers drained a three-pointer. In less than one minute of gameplay, the Tigers had doubled their pointage, 14-12. 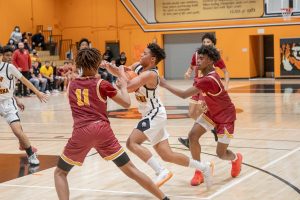 However, the Bulldogs were able to regroup and score a three-point shot. After this, Wayans fought for his basket. Highland showed their ferocity and scored another three-point shot. Senior forward Ezekiel Pannell was able to one-up Highland by landing all of his foul shots.

After Pannell’s shots, Highland careened down the court into another basket, besting the Tigers by one point: 20-19. Junior guard Nick Chabot was able to intercept a Bulldog pass, stunting their drive to the basket, but did not stave them off for long. Highland scored another field goal soon after.

It became clear that the Tigers were not playing their normal high-pointage game. Highland continued to score layups on South Pas, landing basket after basket to maintain a five-point margin.

The gap began to close as Wayans landed a foul shot. However, Highland landed another basket so the hope of overtaking them seemed farther away. Akers’ completed both of his foul shots and with some very expressive looks from Akers, it seemed like the Tiger’s pleas for a win were reinvigorated.

Although the Bulldogs defense proved rabid, the Tigers did not help their own case by almost never resorting to passing. With this, Highland scored yet again. By the end of the second quarter, the Tigers had garnered 22 points, lagging six points behind the Bulldog’s 28.

The second half started with an impromptu Tiger score, something their best known for. When Highland lost control of the ball via the aforementioned slippery fingers, Akers broke away and passed to Wayans, who dunked into the basket, causing the gym to erupt. This was the same move that catapulted the Tigers to the second round of CIF.

Wayans charged toward the hoop and landed a second basket, tying the score 28. The Tigers surpassed the Bulldogs via a successful pass but they were far from safe. Second half playing was much more passionate, with more interceptions, but three-point shots remained inconsistent. Thankfully for the Tigers, the Bulldogs track record with three-pointers is of a similar ilk. 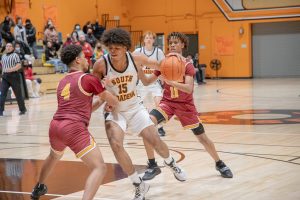 Highland soon tied the score of a successful free throw. Soon after, a possession error led to Highland controlling the ball. Akers made a layup, and senior Micah Matsuoka blocked a Bulldog shot attempt.

The game remained neck-and-neck as Akers landed his free throws, tying the score at 32 apiece. The Tigers then pulled ahead for their first lead of the second half. The Bulldogs continued to miss their short-range attempts and Tigers gained the rebound, but couldn’t pull ahead as their offense became dormant. Revived, the crowd was charged with electricity, the players and spectators anxiously watching the court.

Matsuoka, again with suffocating defense, blocked a Highland shot which led to a Guy breakaway and a field goal. Quickly, the Tigers’ one point margin widened to three. With 30 seconds left in the third quarter, the Bulldogs landed two layups, edging out the Tigers by one-point, 36-35. At this point, it could have been anyone’s game, and the energy in the gym emulated that uncertainty.

Although the fourth quarter included some sparkling defense, especially from Guy and Matsuoka, the Bulldogs still were able to land a field goal. In response, Guy scored a field goal. Wayans charged towards the key and completed a field goal, tying the tally at 42 each. Both stands were restless, itching for a new basket. The Bulldogs missed their shot attempt, and the Tigers seemed to be faring better with three minutes left, but to win, the Tigers had to remember their fundamentals.

Wayans sank a free throw, edging the Tigers’ score to 43. In an attempt to shut the Bulldogs out of the paint, Akers inbounded the ball and passed to Pannell, who landed a smooth three-point shot. On their next possession, the Bulldogs procured a layup. Immediately following that, Guy sank a basket. At this point, the Tigers were four points ahead of the Bulldogs, 48-44, and things were looking good for them. 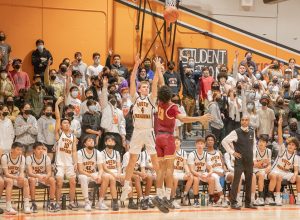 In a matter of seconds, Highland made a layup, bringing them to 46. Highland missed another shot, but grabbed the rebound and scored with a second-chance basket. South Pas lost the ball and which allowed Highland to land another layup.

Like in past games, the match lived and died on the free throws. In a last resort for ball possession, South Pas attempted to rack up as many fouls as they could. Unfortunately, in these failed attempts, Highland completed both of their fouls.

In the bonus foul shot round, Wayans sank both of his foul shots, leading to the Tigers reaching the 50-point threshold. The match seemed far gone when Highland landed both of their free throws. With five seconds left, the Tigers scrambled for baskets, but missed their three attempts, letting Highland walk away with a 54-50 win.

“The game went awful. We didn’t execute down the stretch and you need to execute to be successful. [However] the guys played hard all season,” head coach Ernest Baskerville said. “They played their hearts out all season. [I wish they could’ve] made free throws and layups and turned the ball over less.”

With this loss, the Tigers CIF run comes to a screeching halt, but they have many powerful moments to look back on. Even though the team is losing a talented batch of seniors this year, underclassmen athletes, like freshman point guard Sebastian Martinez, will lead boys basketball to successful seasons in the future.