Boys basketball edges out Indian Springs in CIF opening round 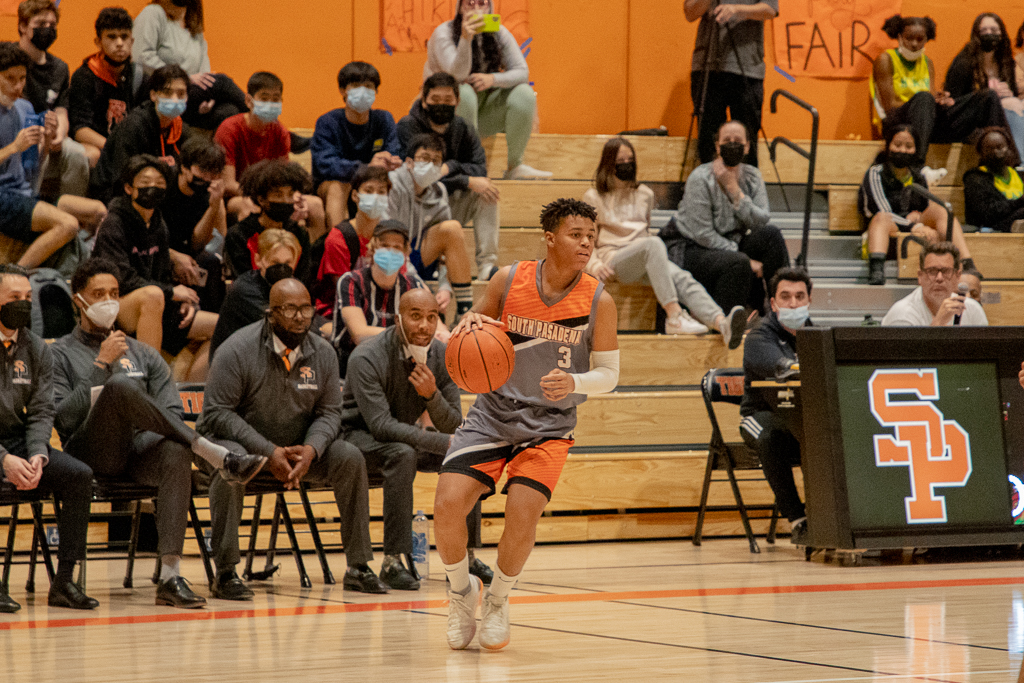 Senior Dillon Akers was vital to the Tigers success, anchoring the team through assists and impressive shots.

Boys basketball defeated the Indian Springs Coyotes 68-62 in its first CIF Division 3A playoff game on Friday, Feb. 11. The Tigers dominated the first two quarters, and even with injuries and fouls plaguing the second half, their communication and plentiful shots secured them a spot in round two of playoffs.

The Tigers won the tipoff and it was off to the races with Lawrence immediately scoring a field goal. During the rebound, the Coyotes attempted a break at the key, but it was thwarted by senior Jonathan Guy, who passed to field-goal-scoring senior Dillon Akers. The Coyotes missed two layup opportunities but then Akers overshot. During the interim, senior Niko Lawrence was able to intercept the Coyote ball and burst down the court.

South Pas had many first-quarter missteps, including a miscalculated throw-in allowing for Indian Springs attempt at the key. Senior Sage Wayans was again able to score a two-point ball, putting the Tigers ahead 6-0. But an Indian Springs breakaway led to them procuring a basket. Being grabbed by an Indian Springs offender, senior Ezekiel Pannell leveled his weight to lay up into the basket.

The Coyotes again made another shot, but Akers countered, making the score 10-4. Wayans lost control of the dribble. The Tiger’s defense consistently allowed the Coyotes to break the key, but if it wasn’t for the Coyotes consistent missed baskets, this would be an issue. The Coyotes were eventually able to land one of their two free throws. Freshman Sebastian Martinez rotated in for Guy and immediately injected life into the court. Akers sank two solid three-pointers. In the turnover, the Coyotes landed a basket. As the Tigers bolstered their offensive court confidence, they underestimated the ferocity and speed of the Coyote offense. They often neglected their defensive line entirely.

By the end of the first quarter, the Tigers had acquired 16 points, a minuscule lead compared to the Coyote’s 12.

The second quarter started with a bang, Martinez promptly landing a basket to bring the total to 18. The Coyotes rebounded with a three-pointer of their own. Then, after some Tiger deliberation and more struggling defense, the Coyotes tied the score with 18, soon surpassing the Tigers with another basket. Wayans rebuffed with another basket, besting the Coyotes by one point.

South Pas refused to let Indian Springs run unaccompanied. This didn’t stop them from scoring another basket, one-upping the Tigers with a two-point shot. Although Indian Springs’ long-range shots were more unreliable, their rebounded layups led to a remarkably close match. Wayans was able to land another basket, bringing the score to 23-22.

The game remained tight, with the Coyotes landing another basket, and the Tigers responding with a score. But the elementary free throws continued to haunt both teams. South Pas remained calculated in their approach. With an assist from Akers, Wayans procured a layup, bringing the Tigers to a four-point lead.

South Pas remained diligent in their defense, as Indian Springs assessed their options. But Akers sank another three-point shot, cementing himself as the star of the court. The Tigers raged a five-point lead through the last minute of the half, with Indian Springs gaining a free throw. Two successful Wayans foul shots and a basket dunk put the Tigers ahead 35-26 at the half.

Indian Springs started the second half and scored a three-point shot within 30 seconds of the buzzer. During the turnover, Pannell landed a field goal. After several Coyote interceptions, Wayans broke away and landed another basket. Martinez rotated into the wing, allowing Akers to lead.

Indian Springs secured two baskets and two free throws, slowly closing the 10-point margin. Two Tiger injuries later, second-stringers rotated in, and the South Pas assistant coaches were penalized for unsportsmanlike conduct after a Wayans injury. In response, the Coyotes were awarded four foul shots, and landed two of them, bringing their score to 37 points to the Tigers 41.

The Coyotes continued to close the gap, landing another basket. The Tigers rebuffed the advances with an Akers three-point basket. The match remained at a five-point difference, a tight margin that is consistent with their last league game.

Wayans recovered and was rotated back in, immediately landing a splintering dunk and the Tigers continued to distance with another basket. By this point, the Coyotes had levied an eight-point difference after another basket with the Tigers ahead 49-41.

The last quarter began and even with South Pas hounding the opposition, Indian Springs was still able to secure a basket. The gap depended on the free throws, which were abundant this game. Three successful Wayans foul shots widened the lead to eight points, 52 for South Pas and 43 for Indian Springs.

A miscalculation ended with Wayans leveling his arm to ricochet an Indian Springs basket. By the six-minute mark, the Tigers tried and failed five separate times to land a basket, losing rebound after rebound. Simultaneously,the Coyotes continued to rack up shots, even then, the four-point difference, 48-52, kept the Tigers afloat.

Indian Springs racked up another three-point shot and Wayans scored a field goal, but action on the court was few and far between. This was until the three-minute mark when Akers scored, yet another, three-point shot, bringing the Tigers to the euphoric 60-point threshold. The Coyotes inched towards this point total, scoring both of those pesky free throws.

The Tigers prepped for rebounds but were unsuccessful in wrestling the ball out of Coyote claws. Indian Springs missed free throws, proving fertile ground for passing. During the turnover, Indian Springs managed a basket and a later half-court three-point shot.

“Those first couple quarters, we did our thing. The last quarters, we have to stay solid,” Akers said “The more competition [there] is, the more we rise to the occasion.”

The Tigers will play the Highland Bulldogs in the second round of CIF Division 3A playoffs at home on Tuesday, Feb. 15.