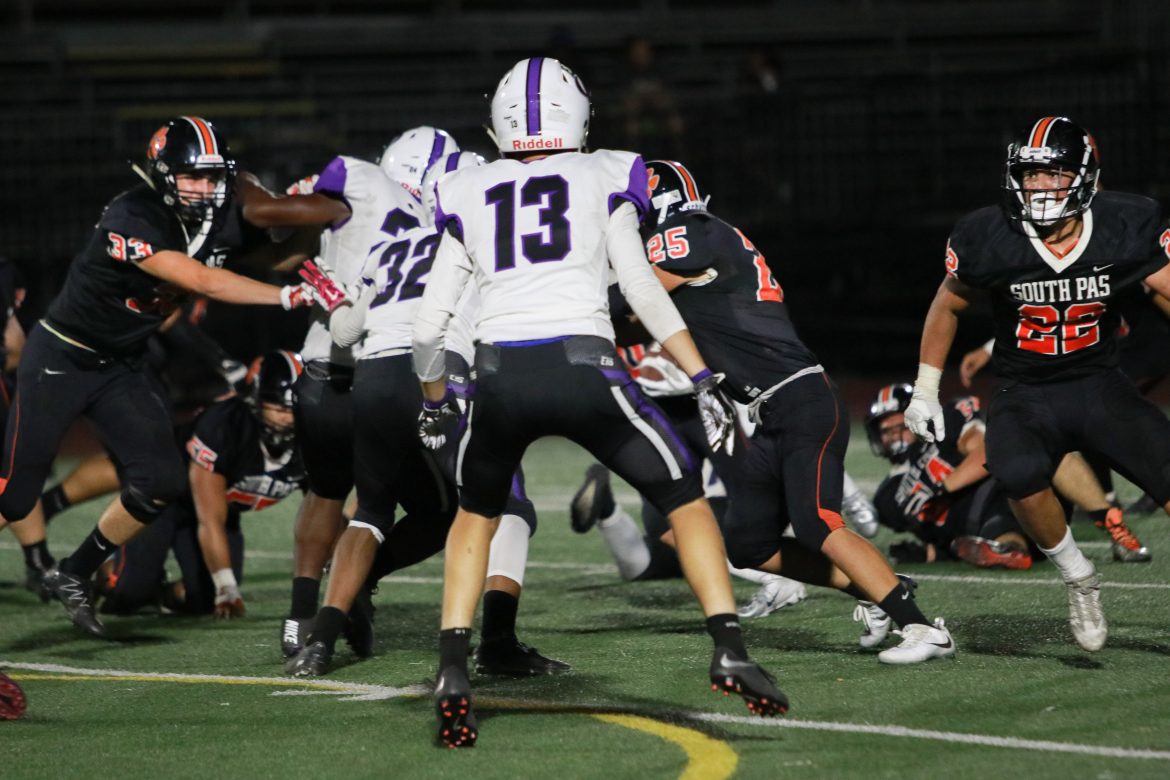 The SPHS football team came away with a nail-biting 7-6 victory against the Eastside High School Lions at home on Friday night. A defensive stand at the Tiger’s own three yard line as time expired sealed the game for South Pas. A week after allowing 59 points, the SPHS defense returned with an impressive performance against the Lions of Lancaster, preventing any big plays, and only allowing one score. Third-string quarterback, Jaden Gallego, and the injury-plagued TIgers were able to do just enough to find a way to win, against a taller and faster Eastside team.

From the opening quarter, the game was a slow-paced, ugly defensive-grudge match.  Junior running back Ethan Hong, and senior running back Jacob Barnes carried the majority of the ball-carrying workload for the Tigers early in the game. While the Tiger offense was unable to move the ball, the South Pas defense began the game with good penetration from the defensive line which forced early three and outs for the Lions. The defense set up the SPHS offense with great field position after junior linebacker Raymond Gomez recovered a fumble at the Lion 28. A first down run from Hong moved the Tigers down to the 10-yard line. The Tigers saw their opportunity vanish after two penalties backed them up to the 40-yard line. On 4th down, an interception thrown by Gallego turned the ball over back to the Lions.

The Tigers were able to convert on their next redzone trip in the second quarter. Junior wideout Ivan Estrada, and Hong each had first down carries to help the offense march down the field. Hong finished off the drive with a six-yard run, powering through weak tackles from Lion defenders on his way to the endzone. Hong totalled 74 yards on 12 carries for the night.

The Lions responded on the following drive, utilizing quarterback runs to move the ball before finishing off the drive with a pitch to the outside for a touchdown. The Lancaster missed two point attempt after the second quarter TD proved to be the deciding point of the game.

The South Pasadena defense followed the mentality of “Bend but don’t break,” in the second half of the game. The Lions moved the ball into the Tiger redzone on the first drive of the second half, running the ball and chewing time off the clock. As the Lions were on the verge of reaching the Tiger endzone, senior defensive back Ruben Echeverria picked off a weak pass from the dual-threat Eastside QB. After first down gains from Estrada, the Tigers lost possession due to one of two mishandled snaps on the day. Fortunately for South Pas, the Tiger defense bailed out the offense by forcing a fumble on the very next play to retake possession.

After two more successful drives for the Tigers, and another interception for Echeverria, the game came down to a defensive stand from the Tigers. After a 3rd sack from junior lineman Cole Stadler, the Tigers seemingly had the game won, only needing a stop on 4th and 14. To the shock of the entire South Pas sideline, the Lancaster quarterback slithered through a porous Tiger D that dropped back into pass coverage. The run brought the fans at Roy Solari Stadium to their feet, as the Tigers tried to grasp on to their one point lead. A pass interference call on the Tigers, gave Eastside a first and goal from the three yard line with under a minute left. The Lions, who had no remaining timeouts, were unable to stop the clock after an unsuccessful run off the right tackle, setting up the final play of the game. A swarm of Tiger defenders were able to bring down the Lion ball carrier as time expired, causing SPHS fans and players to celebrate.

The Tigers will look to improve to 3-1 on the year against a tougher opponent, when they take on the Arroyo Knights next Friday on the road.