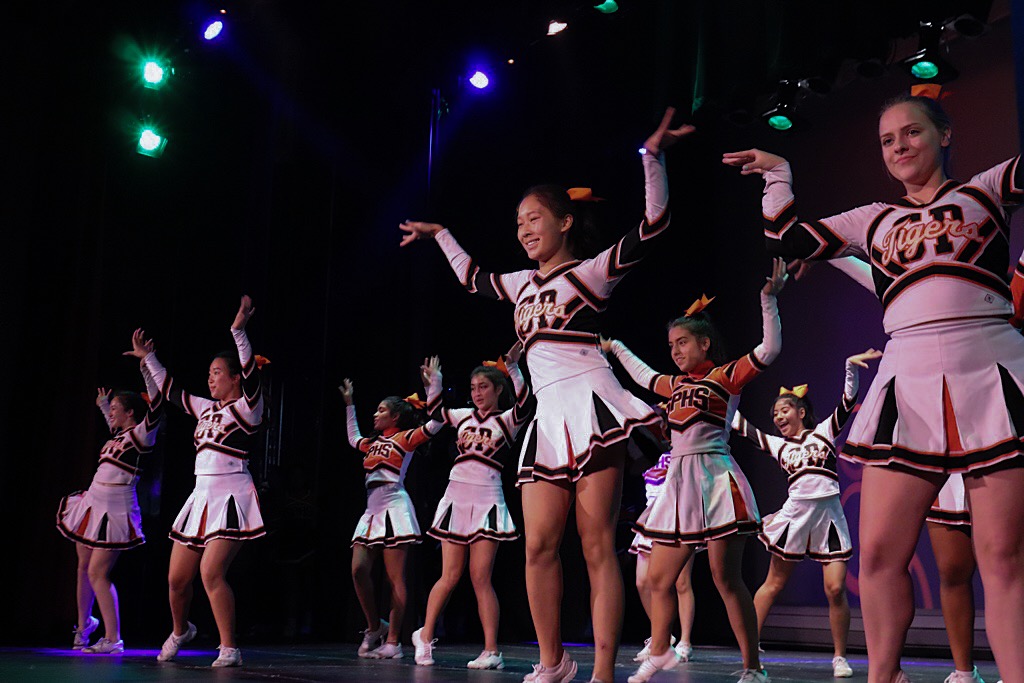 The SPHS pep squad takes the stage to perform to a medley of pop hits during the SAC Assembly.

SPHS commenced the new school year with the annual SAC assembly on Friday, August 31. The first assembly of the year featured this year’s ASB members in skits promoting the Student Activities Card (SAC), the Icebreaker dance, and yearbook, as well as several student performances.

The marching band greeted students with classics such as “Eye of the Tiger” by Survivor and Cameo’s “Word Up!” as students rapidly filled the auditorium. When everyone was seated, sophomores Bella Solomon and Charis Cheung opened the assembly with the national anthem.

A parody of the famous reality show, dubbed “Keeping Up with the Komissioners” introduced the audience to the new 2018-2019 SPHS commissioners. Following the video, ASB members ran into the auditorium, hyping the crowd up and dancing in the aisles to “Hips Don’t Lie” by Shakira. As ASB made their way to the stage, Drake’s “In My Feelings” blasted from the speakers and they performed a fun dance to match the song.

Commissioner of Assemblies senior Flannery Clark led the students in the first roll call of the year and principal Janet Anderson officially welcomed students back to SPHS for another great year, calling it the year of “living lovingly.”

Clark and Commissioner of Internal Affairs Caleb Waters updated the audience with summer news in a skit, poking fun at College Board and the Trump administration. In a spoof of the show “My Strange Addiction,” Clark promoted the Icebreaker Dance alongside Commissioner of Academics Grace Kim.

Pep performed to a plethora of trending pop songs and ASB class officers played a game of musical chairs onstage. Commissioner of Athletics senior Jack Sanders brought on the captains of fall sports teams to encourage students to go out and support their teams.

A  final performance by senior Amanda Estevez singing “Natural Woman” in honor of the late Aretha Franklin brought the assembly to an close.

“I think that [the assembly] went really well considering that we wrote it in such a short time frame,” Clark said.“I felt like the audience was really responsive to our jokes, except for the icebreaker video, which kind of bombed, but you know it is what it is. But besides that I think it was a lot of spirit and a good assembly.”