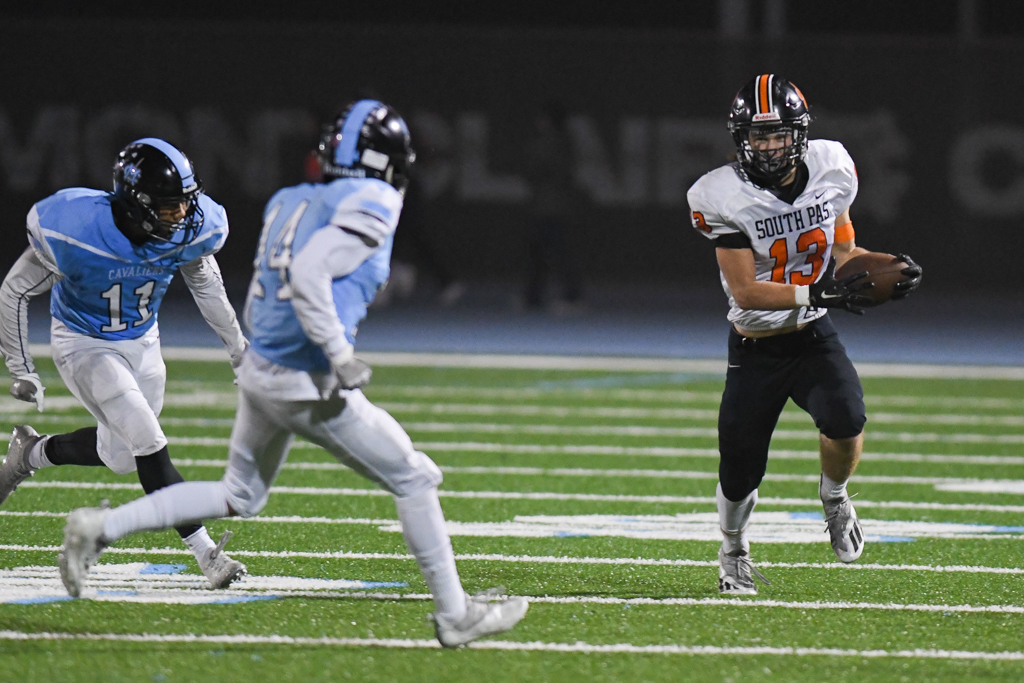 The Tigers put up a fight, tying 21-21 with the Cavaliers in the fourth quarter, but lost momentum in the last few minutes.

Seniors Jack Riffle and Noah Aragon, the two pillars of the Tiger’s team all season, stared at the field with a melancholic pensiveness as their bid to win CIF for the first time since 1959 fell mere inches short. Football’s CIF run came to an end in the semifinals against the Montclair Cavaliers after losing 28-21 on Friday, Nov. 19.

In a back-and-forth competitive contest, a game that featured 80-yard touchdowns, goal-line stands, physical runs, and a plethora of penalties, it was the Montclair sideline that swarmed the field in celebration after an hour of magnificent football.

South Pas received the opening kickoff and started the game with two strong Riffle runs. In Cavalier territory, Aragon was intercepted on a pass intended for senior Grant Huntley.

Montclair gained solid yardage on a screen pass to start its drive. Next, their powerful running back stiff-armed a South Pas defender and blazed down the sideline into the end zone. The first points of the game belonged to the Cavaliers. 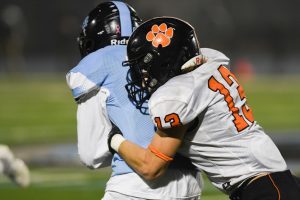 South Pas controlled the ball for seven minutes on its next drive, but came up empty. Riffle and his partner-in-crime, senior Alex Gonzales, continued to find lanes to run. Junior Richard Conti moved the chains with a strong catch, holding onto the football while being sandwiched by two Cavalier defenders. The effort would stall, however, as the Tigers could not overcome penalties and sacks.

Montclair continued their torrid offensive start, converting a third and 20 to keep the drive alive. Following two solid runs, Montclair’s quarterback lofted a high spirling pass to the end zone. The Cavalier wide receiver would come down with the 50/50 ball to extend their lead to 14-0.

The Tigers may have stumbled out of the gates, but as the first quarter became the second quarter, they were determined to tie the game. A trio of Tiger running backs, Riffle, Gonzales, and sophomore Jason Hong wore down Montclair’s defense. The Cavaliers then committed a pass interference and illegal hit to the head penalty, setting the Tigers up inside the 10-yard line. Riffle rifled through the defense to cap the drive off with a touchdown run. The deficit had been halved as the score stood at 14-7.

Montclair appeared to be destined for the end zone once more, completing multiple 10+ yard plays. Junior Quinn Sterling, freshman James Dowd, and junior Ivan Becerra had other ideas. Each made critical tackles and Becerra sacked Montclair’s quarterback on third and 7 to stunt the drive. The Cavaliers attempted a field goal but missed considerably to keep it a one-score game.

When South Pas got the ball back, Aragon was ready to put his fingerprints all over the game. On a play Aragon has made numerous times throughout the season, the Tiger quarterback somehow eluded a sack, slipped through another tackle and heaved the ball, on the run, 50 yards downfield. Aragon’s favorite target, Huntley, hauled it in with a leaping catch deep into Cavalier territory. After the jaw-dropping completion, Aragon used his legs to get into the end zone. On a critical third and 7, Aragon sprinted to the outside and tiptoed down the sideline for a touchdown. The Tigers had come back roaring to tie the game at 14 late in the second quarter. 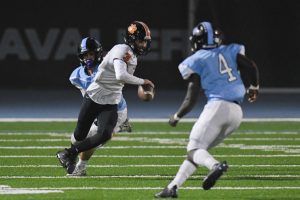 The Cavaliers responded immediately, finding room to run over the middle of the field. They weren’t brought down until they were at South Pas’ 10-yard line. A few plays later, a Montclair touchdown made it 21-14, and that held going into the half.

After a brief intermission and performance by Montclair’s pep squad, the action resumed. Following an intense high-scoring first half, the third quarter was an eventful but scoreless frame. While Montclair looked to be driving the football, sophomore Giovanni Cruz and senior Jaden Castellon put a stop to it, and Montclair punted.

South Pas would punt as well after three short runs. Montclair took over possession and tried to score the first points of the second half on one play with a deep ball, but failed. Junior Aidan Kinney broke up the pass with an athletic deflection. Finding themselves in a fourth and 2 situation a few plays later, the Cavaliers went for it. The Tigers defense, syncing up their line, linebacking core, and secondaries like an orchestra, stopped the Cavaliers on fourth down.

Just as the defense was hitting its stride, the offense slowed down. Noah was sacked as he was winding up to deliver a pass, the ball popped loose, and Montclair took possession. Montclair took that momentum to its offense, converting on the ground and through the air to move the ball into South Pas territory. After a facemask penalty on the Tigers, the ball was placed at the two-yard line. Montclair tried to run it in and was stopped. They tried again with the same result. On third-and-goal, another running effort fell short. On fourth-and-goal, the Cavaliers inches from the end zone, and with the Tigers well-traveled fanbase on their feet, Sterling and Kinney combined to wrap up their running back short of the goalline. The defense had bent but refused to break and gave Aragon, Riffle, and the Tigers offense another chance.

Aragon surveyed the field on the next Tiger drive, delivering a 20-yard strike to Huntley. Huntley weaved through the Cavalier defense and showcased his impressive speed. In a 70 yard footrace to the end zone, the Tigers’ wide receiver would win and make it 21-20. With the South Pas fans jumping and cheering and screaming, and the Montclair bleachers dead silent, Kinney kicked the ball straight through the uprights to tie the game midway through the fourth quarter.

Montclair picked up yardage on physical runs and a catch along the sideline. Any chance of getting in the end zone was erased by a Gonzales sack. The Cavaliers brought out the field goal unit but missed the kick.

Junior Jackson Freking had a reception, and Aragon gained yards on the ground. However, an incompletion and a sack ended the Tigers’ drive. Montclair took over with two minutes to play. On a short field, their running back refused to go down on multiple long runs. Two plays later, with all but four ticks on the clock, its running back barreled into the end zone and won the game for Montclair 28-21. The hopes of a CIF championship game at home were erased for South Pas.

Despite the loss, this year’s Tiger team earned their spot in South Pas Football’s hall-of-fame. With help from each of the 41 varsity players, the Tigers reached the first CIF semifinal since 1977.

The team will lose eight graduating seniors next season. Nonetheless, under the helm of head coach Jeff Chi, they plan to build off this year and finish the job. On the backs of Sterling, Freking, Becerra, Conti, Kinney, Hong, Dowd, sophomore Luke Riffle, and junior Nick Eshom next season, the team has high aspirations. Even as their star running back J. Riffle graduates, another Riffle steps up.

“There were eight seniors this year and we called ourselves the elite eight,” Huntley said. “Being a part of this senior class for such a historic and memorable team, it’s something I’ll remember for the rest of my life.”

The Tigers will be back next year and you can expect the record books to be dusted off and updated once again.

I missed the game but felt like I was there after reading this excellent reporting. You are a fine writer, Ben – I hope you keep it up!