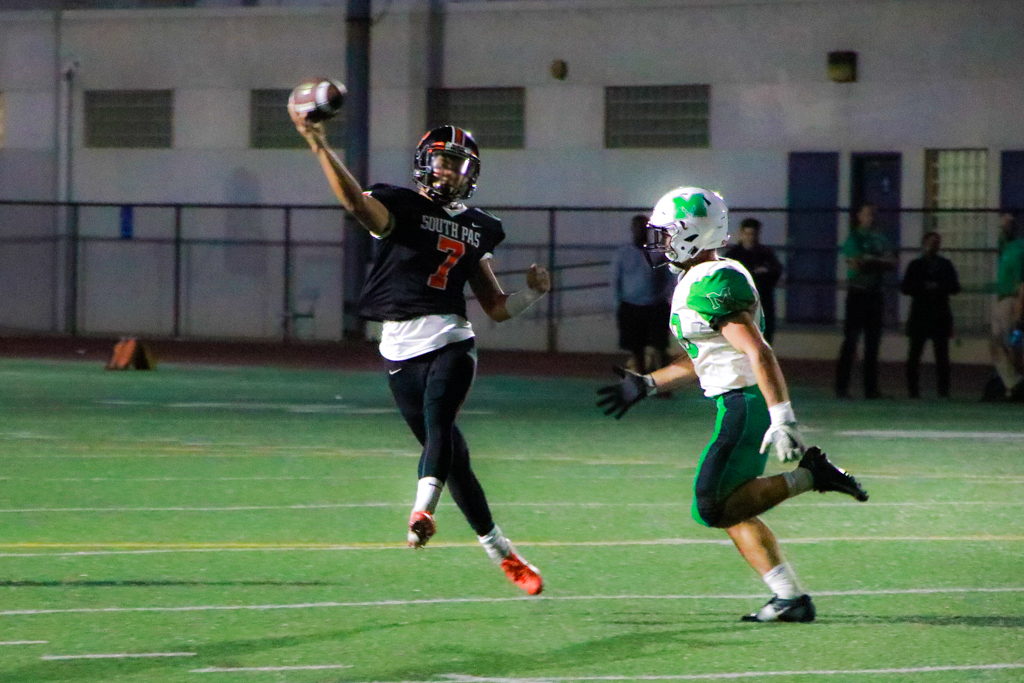 With a strong offense SPHS earned a total of five touchdowns and 377 yards of total offense.

SPHS football competed in their first official game of the season on Friday, Mar. 19, and came out swinging against La Cañada with a 36-30 victory.

After a rough scrimmage with Polytechnic on Friday, Mar. 12, the Tigers bounced back with fighting spirit and saw a strong game from everyone on the roster. Following a tense first half, the Tigers dominated the third and fourth quarter with strong defense and an even stronger offense led by junior quarterback Noah Aragon.

The game got off to a rough start with La Cañada scoring a touchdown via a series of successful runs in the first five minutes, but South Pasadena’s defensive-line prevented the extra-point kick. Upon regaining possession, Aragon put on an incredible performance with a 30-yard pass to senior wide receiver Terrence Sweetman, followed by a decisive quarterback run at the ten yard-line which scored the Tigers their first touchdown, putting them up 8-6.

Going into the second quarter, the Tigers were down 14-8 and lost possession at the 10 yard-line. La Cañada looked to be gaining momentum and had pushed the Tigers back to the 40, until a decisive tackle by sophomore cornerback Dillon Stafford stopped the push. South Pasadena regained possession at the 40, and saw a series of strong runs by junior running back Jack Riffle, who gained upwards of 50 yards over the course of three plays, leading to another South Pasadena touchdown.

La Cañada fired back with a powerful kick return, and fought their way into touchdown range until junior kicker Bo Donlevy intercepted a pass out of the air on fourth down, once again returning possession to the Tigers.

Going into the second half, the Tigers were down 22-21, but energy was still high.

“Well I think we need a stronger offense, because that would leave our defense with a lot more leeway. That said, the team is feeling more confident than we ever have [been],” Stafford said.

Quarter three consisted of a lot of back and forth possession. Aragon notably continued his hot streak with a number of short but effective passes that gained the Tigers close to 80 yards over the next 12 minutes.

The energy across the team dropped significantly following another La Cañada touchdown in the last five minutes of the quarter, putting the Tigers down 30-21.

La Cañada seemed to be pulling away with less than a minute left in the third quarter until sophomore cornerback Richard Conti intercepted a pass at the 50 and ran it back for a touchdown; followed by a successful conversion putting the Tigers at a close 29-30 going into the fourth quarter.

After two runs yielding limited yardage, the Tigers went for a short pass, in which QB Aragon found an unguarded Conti, who, after catching the ball at the 40, shook off two defenders and ran another 60 yards for the game-winning touchdown.

Up 36-30, the Tigers brutally destroyed La Cañada’s last push with an interception at the 50 from senior Zazriel King.

“When you win it always feels good,” coach Jeff Chi said. “When you lose, no matter what you do on the field, it kinda feels crappy, so I’m glad that we came out on top. To start the season this way, well, it’s very nice.”

Following this game, the Tigers will face San Marino on Friday, Apr. 2. South Pas is looking to spend the next two weeks in intensive training to make up for last year’s crushing defeat against San Marino.

School Board approves hybrid instructional models for SPMS and SPHS