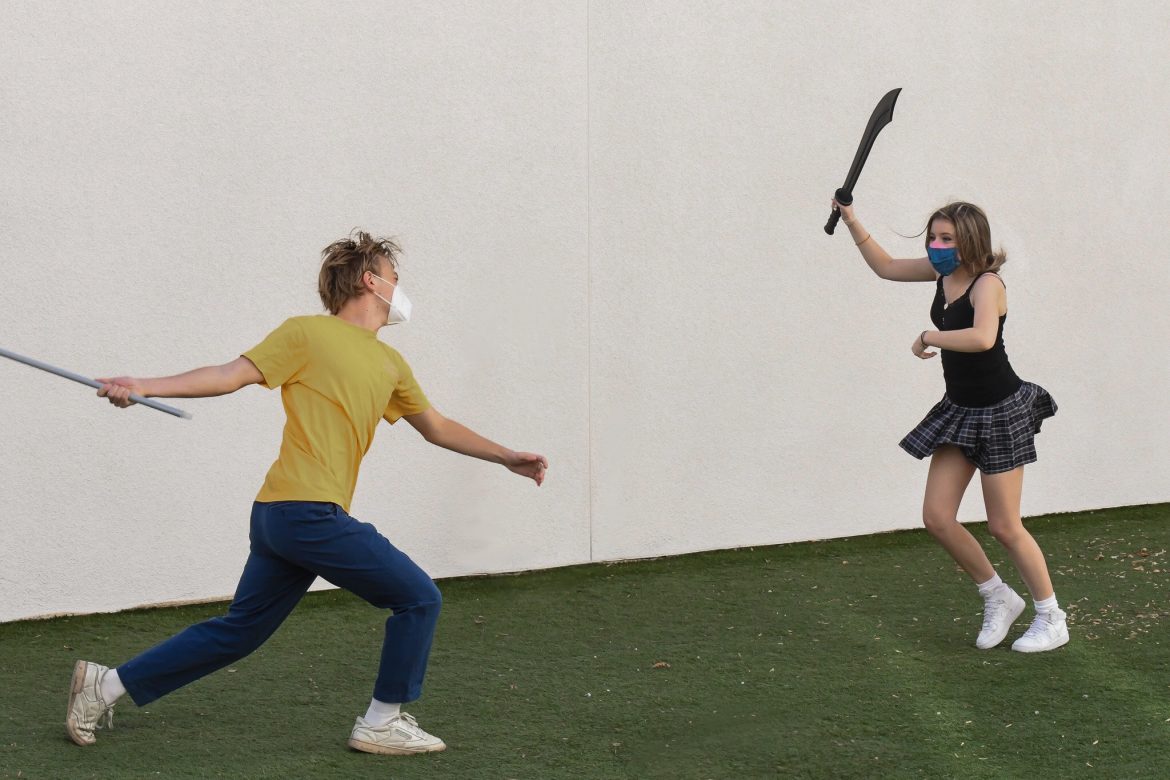 Sword fighting scenes are prevalent in Macbeth, a skill which actors had to practice over Zoom until in-person rehearsals began on Friday, Mar. 5.

The SPHS drama department anticipates the filming of its play Macbeth using a green screen, rehearsing in person for the first time on Friday, Mar. 5.

The current plan is to bring the cast members in one-by-one and film their scenes in front of a green screen at SPHS. Actors playing multiple characters have to come in on different days dressed in the appropriate costume and pretend their scene partner is with them.

“This whole production in general is a challenge. The final outcome of a play produced during COVID-19 is bound to take a lot of extra time and work to perfect. But I know that whatever it ends up as will be entertaining and worth watching,” junior Ava Page said.

Rehearsals began completely virtually in late October, and the current schedule is two to three Zooms and two in-person sessions each week. The cast must stand six feet apart and wear two masks during rehearsals, which are usually in the corridor between the band room and the auditorium. Actors remarked on the strangeness of the first rehearsal on campus.

“[Mr. Hoffa] was very adamant about us following the safety precautions so that made me feel a lot better…. It was also really fun getting to actually run our fighting scenes for the first time with our partners,” senior Tonalli Garcia Rodriguez said. “[Junior] Rena Pau, my fighting buddy, and I were laughing at how it felt more awkward to fight in person than over Zoom. We had expected it to feel more natural in person, but I think the shock of not seeing so many people for awhile and then seeing everyone made the ‘fighting’ feel a bit odd.”

Hoffa included additional activities in the rehearsals to make them more engaging for the cast and foster social connection amidst quarantine. He invited a fight coordinator to teach the actors stage combat, and SPHS Drama alumna Grace Chavez taught the cast how to put on stage makeup.

“I think I have definitely connected with my peers during rehearsal through laughter,” junior Lulu Talesnick said. “I can remember a few times when I have been working with someone on fight choreography, and we laugh at our sword wielding skills or a silly mistake. We also had a workshop where we tried to do our own makeup, which was really fun and a great bonding experience.”

Hoffa wants his students to view the virtual play as its own unique challenge, instead of a downgrade from a completely in-person play.

“I don’t think that expectations have to be lowered everywhere just because we’ve been in [COVID-19],” Hoffa said. “The students have responded to being pushed artistically, and even though it seems challenging, doesn’t mean that just because we’re in [COVID-19] they can’t grow and learn.”

Hoffa stated that the play’s release date and format have yet to be determined.

Senior Quinn Manzo (she/her) is wildly excited to spend her second and final year of Tiger as Print Managing Editor. She hopes to encourage boldness and open expression and help each staff member pursue their personal best.