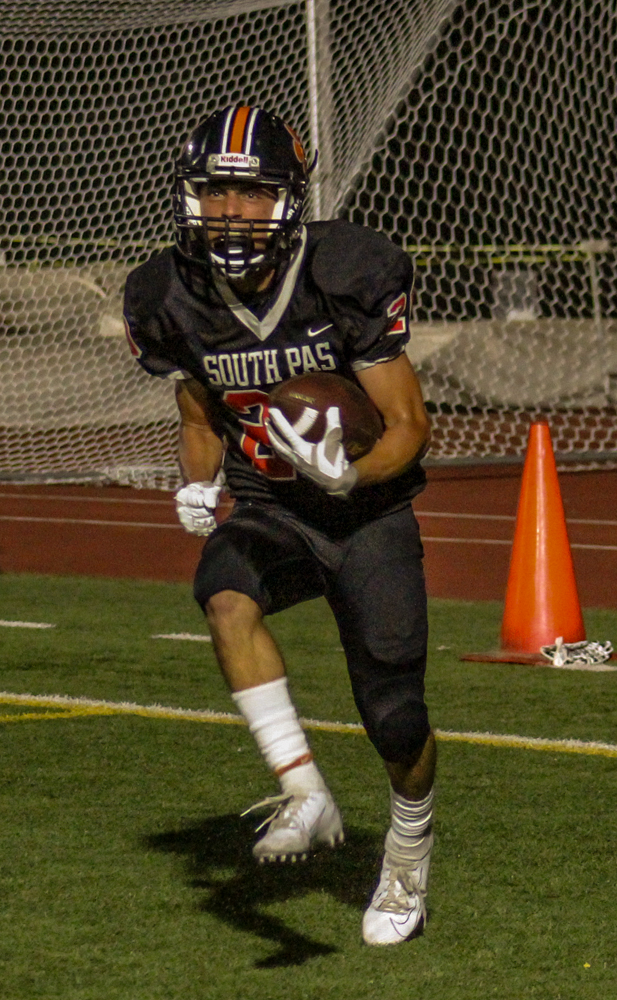 With a balanced offense, the Tigers scored six touchdowns and generated over 400 yards of total offense.

Football rallied for a 41-0 home win against the Bassett Olympians on Friday, Sept. 27. The Tigers dominated with an aggressive offense and a swarming defense that forced multiple turnovers.

The Tigers shut down the Olympian offense on the opening drive, as South Pas linebackers quickly tracked down the Bassett running backs at the line of scrimmage.

The Tigers struck once again at the start of the second quarter. Junior receiver Jonathan Stride leapt over Olympian defensive backs and sped away for a 78-yard touchdown, putting the Tigers up by two possessions, 14-0.

A tough South Pas run defense and a barrage of offensive penalties doomed Bassett’s chances of scoring. The teams exchanged three and outs and the Tigers forced the Olympians off the field after a brutal third down sack by junior linebacker Owen Quimiro.

A poor Bassett punt awarded South Pas fantastic field position at the Olympian 36-yard line. With under a minute to go in the half, senior running back Ethan Hong punched in a one-yard rushing touchdown.

The Olympians tried one last attempt to score, but junior Terrence Sweetman intercepted the pass and ended the first half with the Tigers in a comfortable 21-0 lead.

The 3rd quarter started off spectacularly, as Hong ran in for another six points, but the Tigers’ two-point conversion attempt was unsuccessful.

South Pas offense received the ball again and kept on rolling. Luna-Long threw a quick screen pass to Sweetman, who broke free from a tackle and outran the entire Bassett secondary for a 73-yard touchdown.

The defense continued to harass the Olympians and Sweetman nabbed his fifth interception of the season and returned the ball back to the Tiger 46. The third quarter ended with South Pas ahead, 34-0.

In the middle of the fourth period, junior Brian Zepeda hammered the pigskin in for the final score of the night, bringing the scoreboard to 41-0.

“I feel like our team did great. Personally, I feel like I need to improve a lot more, especially going into next week against Polytechnic, since they’re just a better team then Bassett. Overall, I think our team just ran over them,” Hong said.

The Tigers will look to maintain defensive control in their final preseason game against Polytechnic next Friday, Oct. 4.