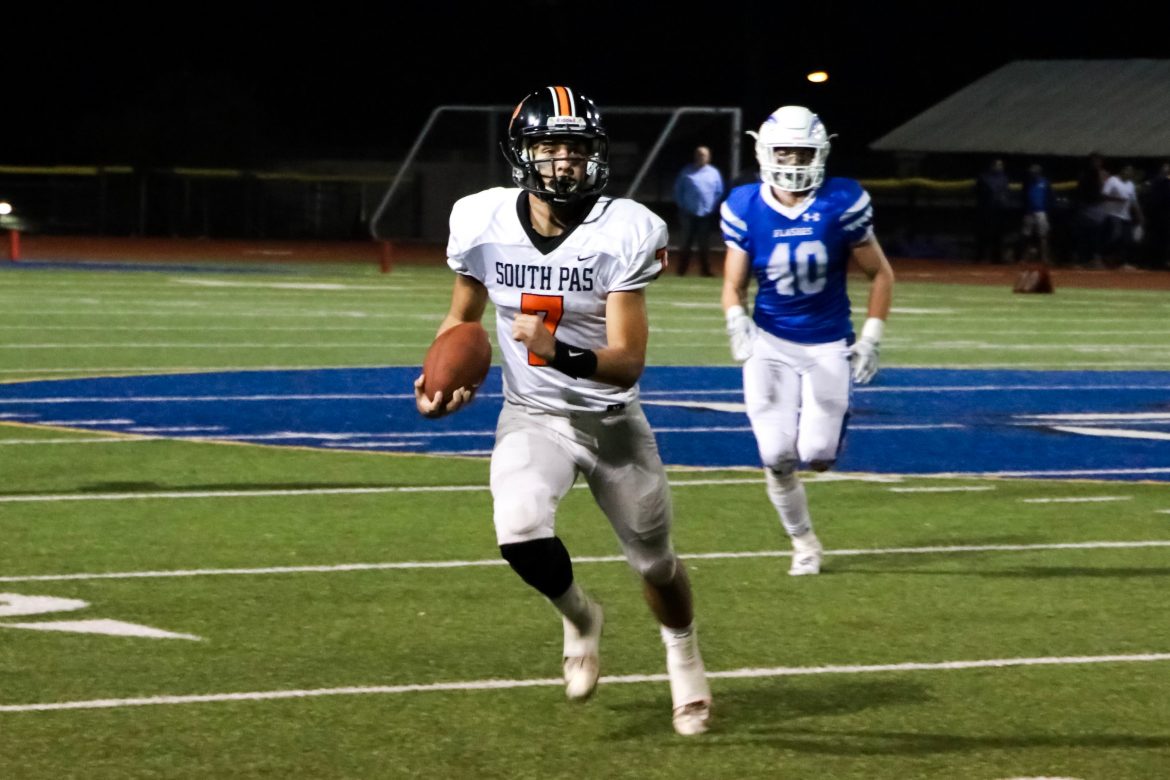 Football suffered a 47-27 defeat to the Fillmore Flashes in the first round of CIF Friday, Nov. 8. The Tigers fell behind two possessions in the second quarter and were never able to recover.

Minutes after kickoff, Fillmore’s versatile offense drove 72 yards down the field for a touchdown. South Pas, unfazed, quickly responded. Senior quarterback Samuel Luna-Long picked apart the Flashes’ zone defense and connected with junior wideout Terrence Sweetman for the 14-yard score. However, the Tigers missed the extra point and couldn’t tie the game, leaving the Flashes with a 7-6 lead.

The South Pas defense couldn’t contain Fillmore, allowing another score with seconds remaining in the period.

Fillmore broke the game wide open in the second quarter. The Flashes were successful in all three of their red zone trips, ballooning the score to 28-6 by the end of the half.

In the third quarter, the Tigers finally forced the Flashes off the field. Sweetman intercepted a pass and Luna-Long threw a 14-yard touchdown toss to senior Ivan Estrada to bring the game to 28-13.

The defense gave up another six points, but the offense continued to fight. Luna-Long linked up with Sweetman for his third touchdown of the night, moving the Tigers within 14.

Estrada would tack on another receiving touchdown in the final period, but the Flashes overpowered the Tigers and finished the game off with two more scores. South Pas fell, 47-27.

“This was a long and hard fought game. Even though in the end things didn’t go as planned, everyone played hard until the clock hit zero,” junior Valentino Nguyen said.

The Tigers concluded the year with a 7-4 overall record, with coach Jeff Chi’s first playoff appearance and season over .500. Luna-Long led the offense with 1,680 passing yards on 62 percent completion and 21 touchdowns. Estrada hauled in 43 passes for 634 yards and nine receiving touchdowns.

“Looking back at the beginning of this season, we realized that we were considered one of the school’s less successful teams. Thankfully we showed that we were able to succeed and finish with a record of 7-4. A great deal of that is attributed to the mindset each player had. No one ever gave up or became complacent with ourselves,” Nguyen said. “Everything came down to the final seconds of every game, so we made every play count. With the season coming to an end and the offseason beginning, we’ll learn from our mistakes and hopefully make playoffs again next year.”