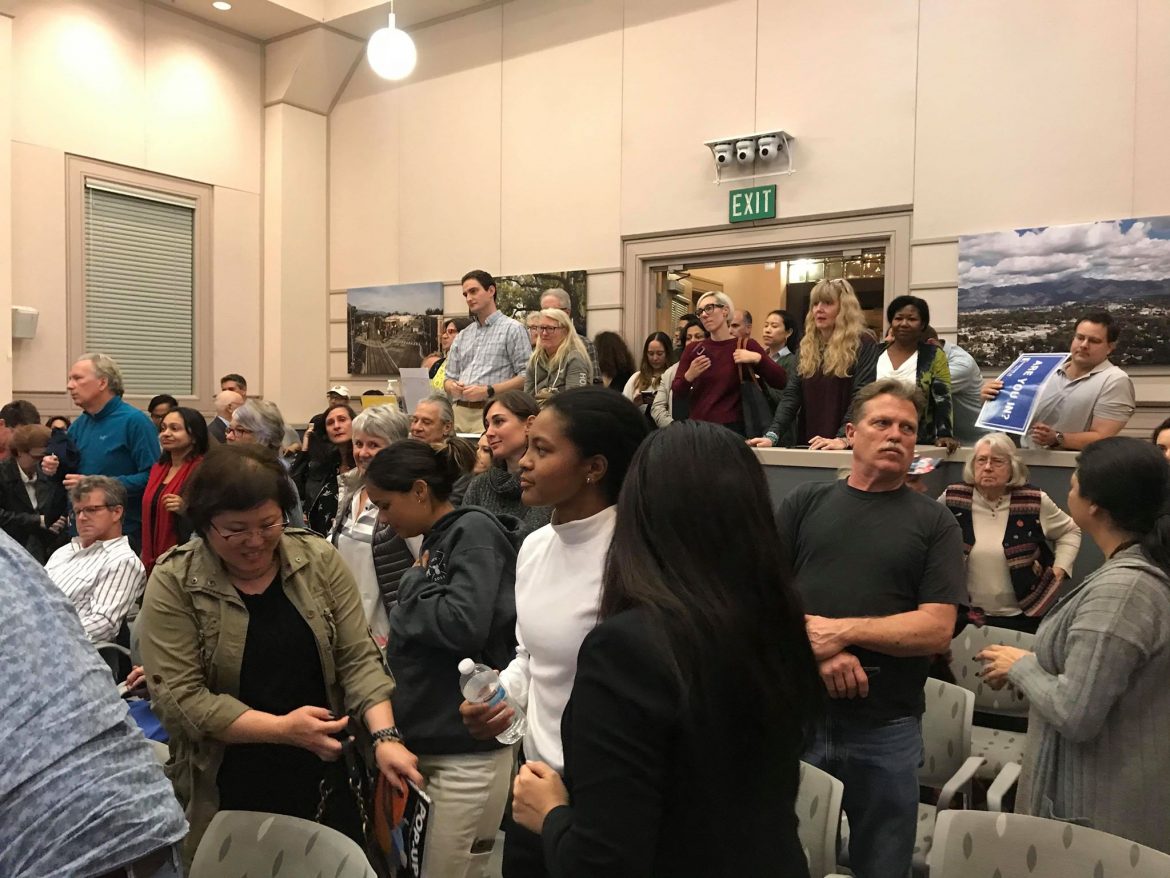 Crowds of residents filled the city council chamber to voice their concerns at the emergency meeting.

The South Pasadena City Council unanimously passed an emergency ordinance prohibiting evictions of renters without just cause at a special meeting on Wednesday Nov. 6. The order will take effect immediately and run until Jan. 1, 2020, when it will be replaced by similar state legislation.

Droves of South Pasadena residents, as well as members of housing rights organizations like United Way, voiced their support for the measure. Several tenants who received eviction notices shared their stories to the council.

“On my son’s birthday, Oct. 22, we received a 60-day notice on our door,” resident Yuki Simmons said. “When I started reading the letter, tears started falling. I honestly didn’t know what to do next or how I could afford the move. I felt a sense of despair.”

“We as citizens of the population need to do something to get more units in here and not hold the landlords [responsible]… and especially the families [who rent out properties],” Schroeder said. “Please don’t hurt us and there are unintended consequences with what [the ordinance is] doing.”

The California legislature passed a renter’s protection bill in September, AB 1482, that caps rent increases at 5 percent plus inflation, starting Jan. 1, 2020. However, in the past few months, many landlords have been evicting people so that they can raise the baseline rent price prior to the law’s implementation.

Many California cities, including Los Angeles, Torrance, Pomona and Pasadena, have passed emergency legislation in the past few weeks in order to combat the mass evictions. South Pasadena resident John Srebalus, along with help from local legal experts, drafted a version of Pasadena’s ordinance for the city council to approve.

The city council was entirely supportive of the legislation, and voted 5-0 to pass it. Landlords can no longer evict tenants without just cause, which includes the renter failing to pay rent or doing a substantial remodel to their property.

However, councilmember Diana Mahmud cautioned tenants on the extent of the ordinance to protect already evicted residents with 60-day notice pending.

“We can’t guarantee that this ordinance will protect you if you have received a 60-day eviction notice,” Mahmud said. “The validity of the ordinance, in particular its retroactive effects — upon those who have already received the 60-day notices — will likely be determined by a court. In light of that… please be sure to contact the Housing Rights Center, which the city has contracted for, to provide tentative advice to you.”

The ordinance will protect South Pasadena renters until similar state legislation is passed in Jan. 1, 2020.