Football’s season came to an end against the Bellflower Buccaneers on Friday, Nov. 18, in CIF semifinals. The Tigers were unable to slow down the Buccaneers’ rushing game and failed to put together a comeback effort. The final score was 34-21, and the Tigers’ magical run fell two wins short of a championship.

South Pas began the game on offense and went on a mammoth, nine-minute drive. Senior quarterback Jackson Freking found senior wide receiver Richard Conti for a first down and connected with senior wide receiver Quinn Sterling in a tight window. On third down, Freking’s pass was broken up by a defender but deflected directly to Sterling, who caught the ball and sprinted for a first down. This heads up play kept the drive going. After a pitch to junior running back Jason Hong moved the Tigers to the red zone, Freking rolled to his left and threw across his body to Conti. From the three yard line, Hong pushed across the goal line to score.

Bellflower, whose fans packed the visiting bleachers, had an immediate response. The drive was set up by an athletic return primed by the Buccaneers on the Tigers’ side of midfield. Their running back bounced off tackles and dodged defenders and he blazed down the sideline and tied the game. Late in the first quarter, the score stood at 7-7.

The Tigers began another methodical drive. Freking eluded a sack and found Conti for a first down. Hong burst through a seam in the defense on a strong run. However, Hong was stood up on consecutive efforts, putting the Tigers in a 4th & 1 situation. Head Coach Jeff Chi pulled the trigger on fourth down, sensing a big spot early in the game. Freking got across the line to gain on a quarterback sneak, extending the drive. After using his legs to impact the game, Freking threaded the needle to Conti inside the Buccaneers’ 10-yard line. Appearing to be destined for the end zone, momentum was swung. South Pas fumbled and the ball was scooped up by a Bellflower defender and returned the length of the field for a Buccaneers touchdown. Bellflower had flipped the game on its head and took a 14-7 lead.

The Tigers once again controlled the football, but the two long drives to start the game took something out of the offense. Conti was sent flying backward, senior wide receiver Aidan Kinney couldn’t keep his feet in bounds on a pass near the sideline, and senior wide receiver Nick Eshom had a ball hit off his fingertips. Junior punter Sawyer Fox pinned the Buccaneers inside their own 15-yard line.

Bellflower’s running back refused to be brought down, making men miss and out-running Tiger defenders. The Buccaneers offense did slow down as halftime neared, but they were able to convert a 4th & 1 and keep the effort moving. From the 1-yard line with 28 seconds left, Bellflower’s quarterback scored a touchdown and gave the Buccaneers a two-possession lead heading into halftime. 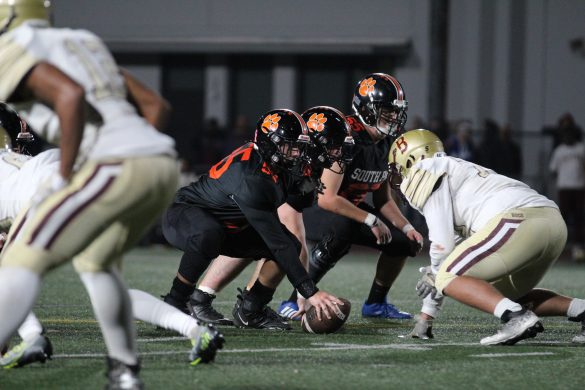 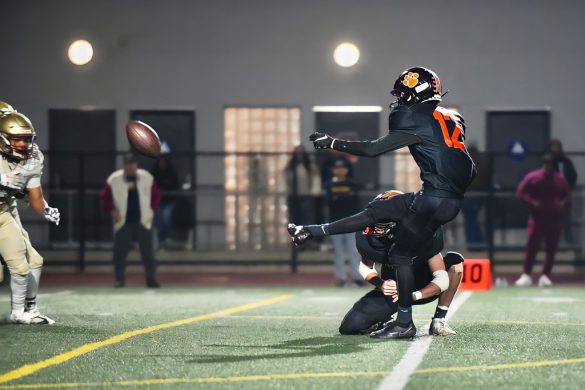 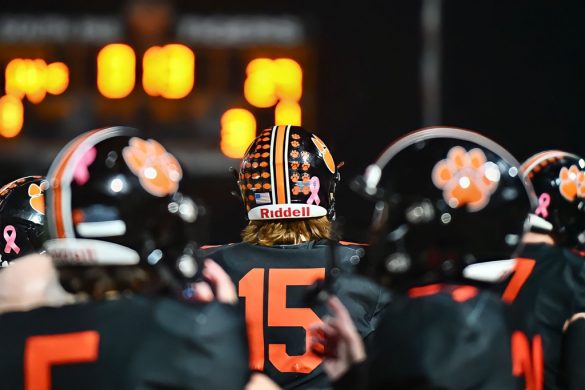 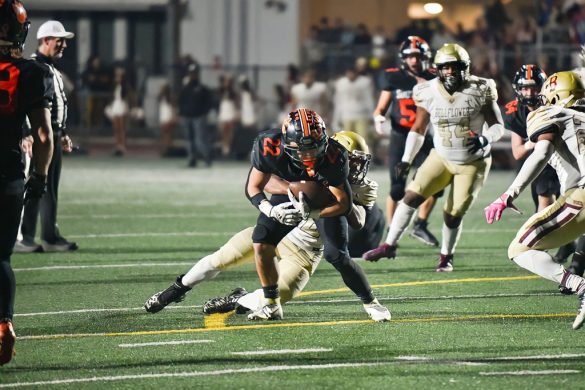 South Pas took the field to a thunderous applause as second half action began. The Tiger faithful tried to energize their team as the comeback effort unfolded.

Bellflower came out of the break with a statement drive, needing only two plays to get into the end zone and extend their lead. A jet sweep had the Tigers’ defense searching for answers and desperately trying to catch the Buccaneers’ shifty running back. Midway through the third quarter, Bellflower was beginning to pull away with a 27-7 lead.

Freking tried to force a pass into traffic on the next Tigers’ drive, and the pass was deflected and intercepted. The Tigers were running out of chances, and couldn’t afford a turnover.

Senior defensive end Isaiah Cooper sacked the quarterback and junior linebacker Giovanni Cruz stopped Bellflower’s running back on 3rd & long. The Buccaneers attempted the fourth down but were stood up; the Tigers’ defense did its job to get the ball back to Freking and the offense.

The Tigers marched down the field on the next drive. Junior Luke Riffle was lost in Bellflower’s defense and caught Freking’s pass without a defender within 10 yards of him. Then, Conti came back to the ball to catch Freking’s pass, slipped a tackle, and walked into the end zone for a touchdown. The quick strike score was just what the Tigers’ offense needed as they tried to claw back into the game.

Sophomore defensive end James Dowd combined with Sterling on a sack, and Bellflower turned the ball over on downs. The defense once again came up with a timely stop. Down two touchdowns with eight minutes left, the Tigers began to see a path to victory.

The Tigers had essentially abandoned the running game and let Freking find his primary wide receivers. This time it was Sterling over the middle of the field who hauled in the pass in rhythm. While trying to extend the play and gain yards, Sterling fumbled the football and a Bellflower defender recovered the ball. This crushing turnover, the third of the game for South Pas, sealed Bellflower’s win.

The Buccaneers tacked on a touchdown to put the game out of reach. The Tigers went down the field and scored as well, but it was too little too late. The Tigers’ season ended with a 34-21 loss.

Bellflower will advance to CIF finals while South Pas will enter the offseason and prepare for 2023.

The Tigers finished the regular season 8-2, sweeping non-league play and overwhelming La Cañada, Temple City, and Pasadena Poly. South Pas defeated Yucca Valley and St. Margaret’s in CIF, marking back-to-back semi-finals appearances. The Tigers will lose 15 seniors this year, including pillars of the team Freking, Conti, Sterling, Kinney, Eshom, and senior offensive tackle Ivan Becerra. However, the program is excited about the young stars of the program, such as sophomore quarterback Zachary Lee, sophomore wide receiver David Eisenberg, who it hopes will step up next season and replace this year’s starters.

Coach Chi led the Tigers to another brilliant season of football, and South Pas looks to do it again in 2023.