Football holds off Santa Clarita to improve to 2-0 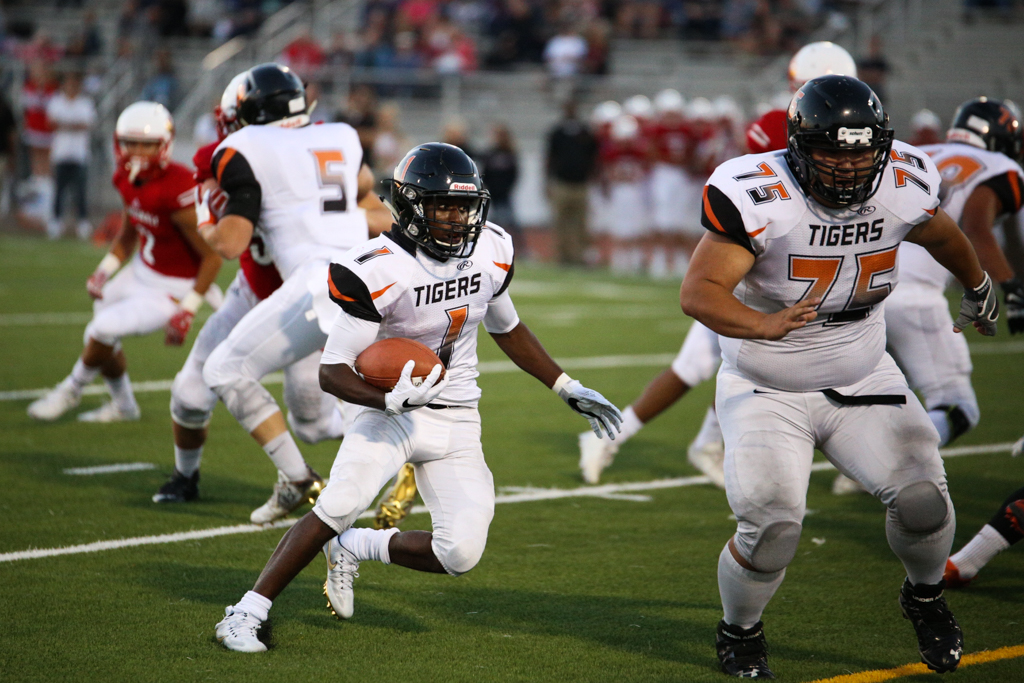 South Pasadena football improved to a 2-0 start in the team’s preseason after the Tigers dropped the Santa Clarita Cardinals on the road with a final score of 30-27 last Saturday, September 3.

A quick Cardinals turnover put South Pasadena in good position to begin their first drive to Santa Clarita’s end zone. With possession of the ball, the Tigers displayed an effective ground game with junior running back Jackson Totleben leading a South Pas drive to the Cardinals’ 22 yard line. Senior utility player Jalen Ross tallied two additional carries for the Tigers, but a lockdown Cardinal defense would force South Pas to kick a 25 yard field goal, giving them a 3-0 lead.

The Cardinals’ second drive did not fare much better. After reaching their own 32 yard line, senior defensive back Jonathan Calderon picked off the Cardinal quarterback and took it to the house for an early 10-0 lead. From here, the Tigers would take the initiative on the field. After forcing another fourth down against Santa Clarita, they would regain possession at their own 40. On the next play, Ross would take off on a 60-yard run into the end zone for a 17-0 lead late in the first quarter. The Tigers’ luck only grew as an interception by junior linebacker Fernando Sornoso stopped the Cardinals’ offense at midfield. A 15 yard penalty on Santa Clarita would push the ball further into Cardinal territory to put the Tigers in position for another touchdown to start the second quarter.

After a botched snap, senior quarterback Adam Arellano remained calm, recovering the ball and connecting with Calderon in the end zone for the third South Pasadena touchdown. The Tigers now held a 24-0 lead over Santa Clarita and kept their momentum heading into the next drive. Calderon chalked up additional receptions to put the Tiger offense in the Cardinals red zone but fell short after being pushed back by a stubborn Santa Clarita defense. South Pas decided to take the field goal, making the score 27-0. Santa Clarita showed little signs of improvement in their offense as the quarterback fumbled the ball the next play into the hands of senior defensive end Aric Quan. After gaining little yardage on their next drive, the Tigers’ punt was blocked by Santa Clarita to put the line of scrimmage at South Pasadena’s red zone late in the first half. Despite being in great position to score, the Cardinals offense found no open targets against the Tigers’ lockdown defense and capped of the half with a score of 27-0.

In the third quarter, South Pas struggled to match the momentum seen in the first half as the Tigers were the ones in trouble offensively. Another Cardinals’ blocked punt set the ball back at the Tigers’ 30 yard line. Unlike the drive seen at the end of the half, Santa Clarita’s offense converted the very next play off of a 30 yard pass 9:37 minutes into the quarter. A missed extra point attempt set the score at 27-6 with South Pas coming out flat on offense. The Cardinal offense scored another unanswered touchdown after muscling out a one yard run for a score of 27-13. Both teams would suffer an offensive relapse as the rest of the quarter was spent punting away to each opposing team.

The Tigers’ offense showed no signs of momentum opening the fourth quarter. Although South Pas held up defensively, both sides couldn’t reach field goal range. Desperate to score, the Cardinals pass offense chiseled away at the Tiger defense from their own 25. Santa Clarita would light up the scoreboard with a third unanswered touchdown off of a 17 yard pass for a score of 27-20. South Pas would counterattack with Ross leading the running game to put the Tigers in the Cardinal red zone with 1:34 on the clock. The Tigers offense wasn’t able to capitalize on the opportunity and opted for a 34 yard field goal to give the Tigers a 30-20 lead in the game. An ensuing pass frenzy from Santa Clarita put them back at the Tigers 10 yard line. The Cardinals would manage to convert on fourth and third for a score of 30-27 and 5 seconds left on the clock. Despite the Cardinals attempt at an onside kick, South Pas was able to maintain possession and decided to run down the clock.

“It feels great to get the win, we had a good team effort all around and we showed off strong in the first half,” Calderon said. “This game really prepared us since our next game is against Bonita and they’re a tough team to beat.”

South Pas will play its first home game of the season against Bonita High School next Friday, September 9 to try and improve to 3-0 in the preseason. Last year Bonita came out with a 40-30 win against Monrovia High School.

Turf renovations to reach completion within next few weeks

SPHS welcomes parents at Back to School Night