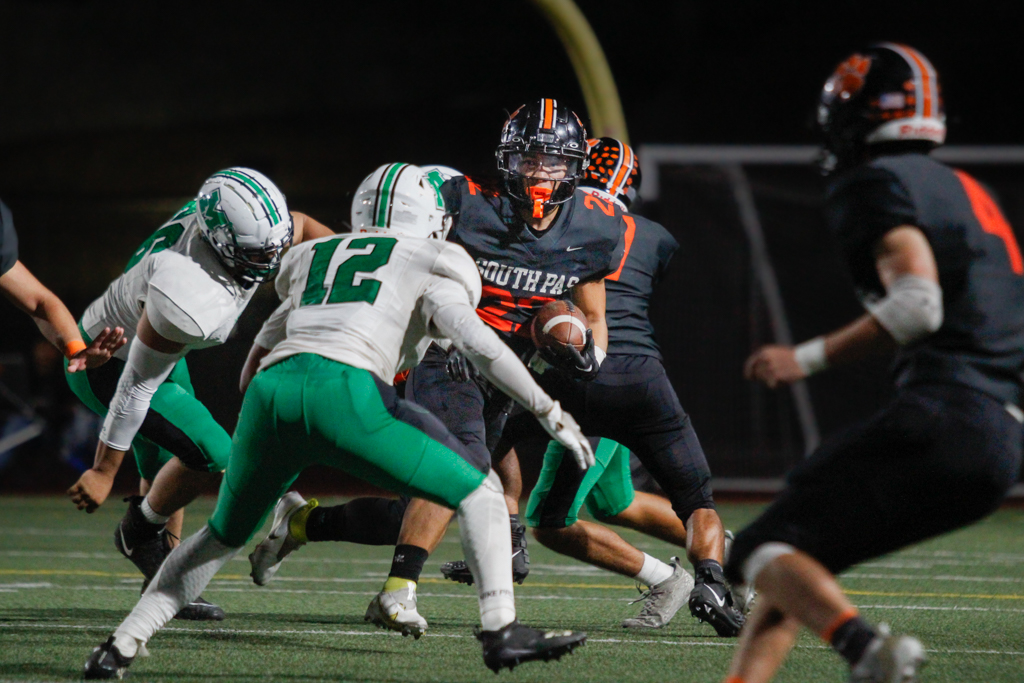 Leading the Tigers' offense, junior running back Jason Hong (22) had South Pasadena on the verge of beating Monrovia.

Football battled the Monrovia Wildcats on Thursday, Sep. 29, but ultimately fell short by a final score of 35-21. The Tigers hosted the first Rio Hondo League matchup of the season, and competed with the Wildcats. South Pasadena went into halftime tied with Monrovia, but the game slipped away in the second half. The Tigers showed significant improvements from the 56-7 beatdown they took last year against the Wildcats, very nearly seizing a victory from their league rivals.

Monrovia received the opening kickoff and marched down the field on their first drive. The Wildcats converted a 20 yard pass and gained ground on a screen pass. Consecutive tackles from senior linebacker Quinn Sterling led to a Monrovia third down, and pressure from sophomore defensive end James Dowd forced the Wildcats quarterback to throw the ball away. On the ropes, Monrovia converted a fourth down and scored a rushing touchdown to take an early 7-0 lead.

Monrovia’s commanding first drive poised South Pas to respond. On the first play of the drive, senior quarterback Jackson Freking threw the ball to junior tight end Sawyer Fox in stride. Fox slipped past the defense, hauled in Freking’s pass, and outran Monrovia defenders for 50 yards into the end zone. This flashy touchdown proved to South Pas fans that the team was ready to take on the Wildcats.

Tackles from Dowd and junior linebacker Giovanni Cruz put Monrovia in a disfavorable position on their next drive. After a deep ball fell incomplete, the Wildcats punted. Taking over on Monrovia’s 45 yard line, junior running back Jason Hong sprinted down the sideline with senior center Aidan Marrujo setting up the run by blocking defenders. After a Monrovia penalty, Freking rolled to his left and fired to the end zone for intended target and senior wide receiver Richard Conti. Conti leapt at the front of the end zone and came down with the catch, scoring the Tigers second touchdown in as many drives. Midway through the first quarter, South Pas led 14-7.

The Tigers carried over the early momentum to defense. Junior cornerback Harrison Farley intercepted a pass and returned the ball past midfield. This gave the Tigers offense a scoring opportunity. Hong ran for a first down and Freking connected with Sterling for yardage through the air. After a pass landed incomplete off of Fox’s fingertips, senior kicker Aidan Kinney came on for a field goal. Kinney chipped the ball wide right.

The two teams granted the scoreboard operator a break for most of the second quarter. South Pas’ defense stepped up again, with Sterling tripping up Monrovia’s running back and Kinney coming up with a third down tackle. Monrovia punted and South Pas took over possession. The Tigers punted the ball right back.

The Wildcats then turned the ball over on downs. After a first down catch-and-run, the quarterback was errant on consecutive passes and the Tigers were given a chance to extend their lead. A high snap over Freking’s head shut down the drive, and the Tigers would punt plays later. South Pas squandered an opportunity to make it a two-possession game.

Monrovia finally got through to the end zone, using a strong running game and screen pass to get into South Pas territory. After a Wildcat wide receiver slipped through tackles and barreled into the end zone, Monrovia tied the game at 14-14 late in the second quarter.

With a minute remaining in the first half, Freking passed to junior wide receiver Luke Riffle for a first down and fired a strike to Conti for additional yardage. A penalty was tacked onto the play, and Freking continued to execute well in the Tigers one-minute drill. Quick passes to Dowd and Conti put South Pas near the end zone, and the team opted for a field goal attempt with seconds on the clock. The kick missed, and the Tigers came up empty.

Band performed at halftime and second half action began. South Pas started with a three-and-out, and Monrovia responded with a 40-yard run. Plays later, the Wildcats scored on a rushing touchdown. Monrovia took a 21-14 lead early in the third quarter.

The Tigers leaned on Hong when they regained possession. Hong plowed past defenders and cut back inside to convert a critical fourth down. The promising effort would stall, however, as Freking was intercepted.

Monrovia began to pull ahead, scoring another touchdown. The Wildcat quarterback faked the defense and blazed to the end zone to extend Monrovia’s lead to 28-14.

South Pas was far from out of the game. Their next drive was sparked by Sterling’s spectacular catch between defenders. Hong ran into the end zone for a touchdown and trimmed the deficit to 28-21. The Tigers then needed someone to step up on defense to get the ball back to Freking. That person was junior linebacker Carlo Williams who recovered a fumble.

The crowd rose to its feet midway through the fourth quarter with South Pas threatening the end zone. Freking pushed ahead to convert a third down and short situation. Then, Freking dropped back and delivered a spiral to Conti in the end zone. This electrifying touchdown sent the crowd into a frenzy, as it appeared the Tigers had tied the game. The referees threw a flag on the play and the penalty went against South Pas, negating the touchdown and prompting boos to reign down for Solari Stadium.

The Tigers had played three-and-a-half quarters of imposing football, but the penalty took all of the life out of the team. Freking threw an interception and Monrovia added another touchdown. The game was out of reach as South Pas played out the final drive. The Tigers lost 35-21, with victory eluding South Pas in the fourth quarter.

Despite the loss, South Pas put up an impressive effort and were one call away from tying the game in the fourth quarter. The Tigers will look for their first RHL win next week against Temple City on Friday, Oct. 7, playing at home for the homecoming game and senior night.

Letters of recommendation: The Hunger Games of college admissions