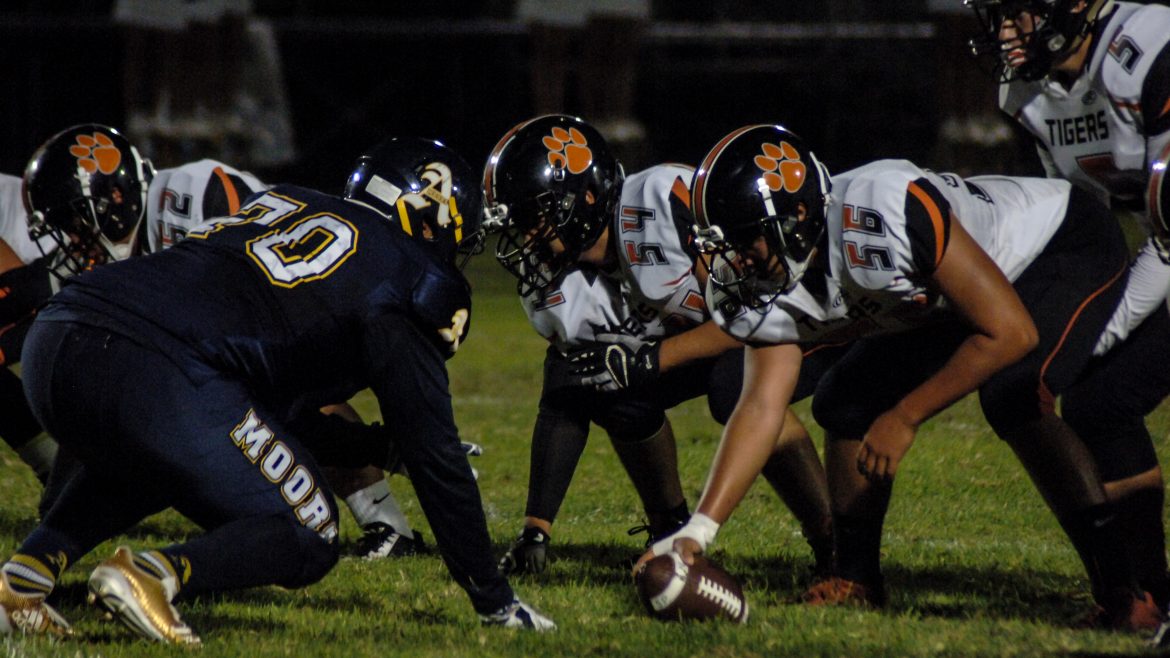 South Pas prepares to snap the ball against its adversary.

South Pasadena football suffered their second loss of the season on Thursday, September 28, falling to Eagle Rock 35-17 at home. The Tigers, now 4-2 on the year, were plagued by a multitude of turnovers in their final preseason game.

Mental mistakes and costly penalties hindered both offenses in the first quarter. Holding penalties were detrimental to the drives, as the two teams were constantly faced with third and long situations. South Pas managed to convert one of these third downs on a 26 yard pass over the middle to senior Danny Rios.

The Tigers finally broke the deadlock in the second quarter, as senior wide receiver Sidney Luna-Long took a bubble screen pass 72 yards for a touchdown. After catching the pass from junior quarterback Justin Huff, Luna-Long sprinted through holes opened by his blockers all the way to the end zone. The play marked the longest play from scrimmage this season for South Pasadena.

Eagle Rock struck back with a touchdown of its own, capitalizing on two fourth down conversions in the drive. The Tigers had difficulties defending the roll out pass, which the Eagles utilized all game. With misdirection and a unique lateral double-pass, the Eagle offense was able to creatively move the ball down the field.

South Pas started their final drive of the half with good field position following an interception by senior Dorian Torres. The offense was unable to take advantage with a touchdown, but Huff was able to knock in a 45 yard field goal, giving the Tigers a 10-7 lead going into halftime.

Right from the second half kickoff, the momentum had flipped. The Eagle offense was able to seamlessly drive the field with their short, quick passing game. Along with their no-huddle offense, the Tiger defense had trouble defending the roll out pass, which the Eagles utilized all game.

The Tigers fell victim to costly mistakes once again in the second half, combining for four turnovers. In one game-defining stretch, the Eagles returned two interceptions for touchdowns in consecutive drives.

“They came out and hit us pretty hard.” Coach Jeff Chi said. “In the second half, a couple turnovers put us on a downward slope.”

Senior Gavin Chi added a rushing touchdown late in the fourth quarter to bring the score to 35-17. The Eagles had already put the game out of reach, however, making the Tiger comeback attempt futile.

“We have some holes that we have to fill, but were a tough team,” senior linebacker Winn Starratt said.

Following the defeat to Eagle Rock, South Pas will look forward to its Color Day matchup against Monrovia in October 6th’s league opener. The Wildcats struggled in non-conference play this year, finishing with a 0-5 record, but will hope to upset the Tigers at home.