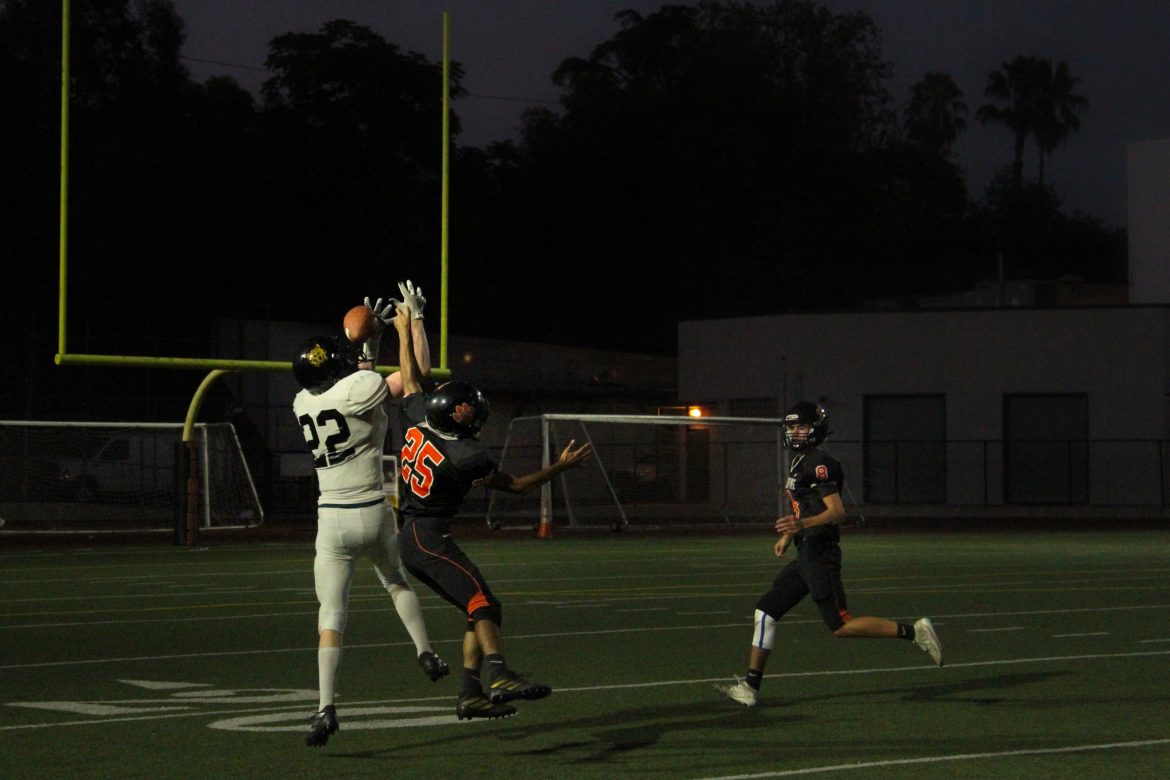 There was no shortage of South Pasadena spirit in football’s home opener on Friday, Aug. 27, despite a 33-14 loss. The Tigers were originally slated to play the Viewpoint High Patriots, however, due to athletes on Viewpoint testing positive for COVID, they challenged the Boron Bobcats.

Just minutes after kickoff, one of the team’s top targets, senior wide receiver Grant Huntley, was benched due to a shoulder injury after landing on it awkwardly during a play, crumbling the Tigers offensive game plan.

Boron came out firing with a 78 yard run from their punt returner which set up their first drive just yards from the end zone. A few plays later, their running back dove past the pylon, giving Boron a 6-0 lead.

Late in the first quarter, South Pasadena fumbled the football and it fell into the hands of a Bobcat defender. He took it all the way to the end zone and, after a two point conversion, extended their lead to 15-0.

The second quarter held no successful drives as neither team scored until the clock ticked under a minute. With 48 seconds left in the half, Boron’s running back found the end zone and extended their substantial lead to 21-0. South Pasadena wasn’t done yet, however, as senior running back Jack Riffle ripped off a huge run to put South Pas on the scoreboard. Heading into the half, Boron held a 21-7 advantage.

The Tigers continued their comeback effort in the third quarter. Junior cornerback Aidan Kinney intercepted a pass and gave new life to the team. Kinney also deflected a pass to save a touchdown earlier in the game.

A strong run from senior quarterback Noah Aragon set them even closer to the end zone, and they eventually scored on a second Riffle touchdown run of the game. Riffle finished with 24 rushing yards and 65 receiving yards for an impressive total of 89 yards against Boron. Aragon completed an efficient 21 of 28 passes for 188 yards and 2 touchdowns. And it was in no small part because of Riffle and Aragon that South Pas found themselves down only one score late in the third.

South Pasadena got the ball back on a fumble recovery from junior Dominic Rosenberg, who had a big game defensively with three solo tackles and seven overall. Senior Alex Gonzales led the team with 11 tackles and Junior Quinn Stirling added 10.

“Defensively I think they did a great job, a huge improvement from last week,” Chi said. “We have to keep doing what we’re doing, hustle to the ball so if there are any turnovers, someone will be right there to pick it up.”

The Tigers were in a prime position to score when Boron’s defense forced an Aragon fumble. The offensive line struggled to contain constant pressure from the Bobcats defense, which led Boron to knock the ball loose from Aragon. With four seconds to go in the quarter, the Bobcats recovered the ball and went the length of the field for a crushing touchdown. The score was 27-14 going into the 4th quarter.

The game slipped away from South Pasadena as they couldn’t hold up defensively, leading to another Boron touchdown. The Tigers were worn down by Boron’s rushing attack and struggled tackling in the open field and consequently couldn’t overcome four turnovers. The game concluded with a 33-14 loss.

“One of the objectives moving forward is to protect the ball,” Chi said. “We can’t turn the ball over and give possessions up. Hopefully, that’s something we can improve on this upcoming week.”

Even though this game wasn’t as successful as it was hoped to be, the SPHS Pep squad and fans made it a great night for South Pas football.

“The atmosphere was awesome,” Chi said. “Seeing all the fans come out and supporting us, the cheerleaders cheering and the band playing…the only thing I wished we would have done was to win a ball game and hear them celebrate. We’re gonna keep working so the next time we have a home game they’ll have something to cheer about.”

The Tigers are determined to get back on track next Friday, Sept. 3rd in an on the road game against the Marshall Barristers.