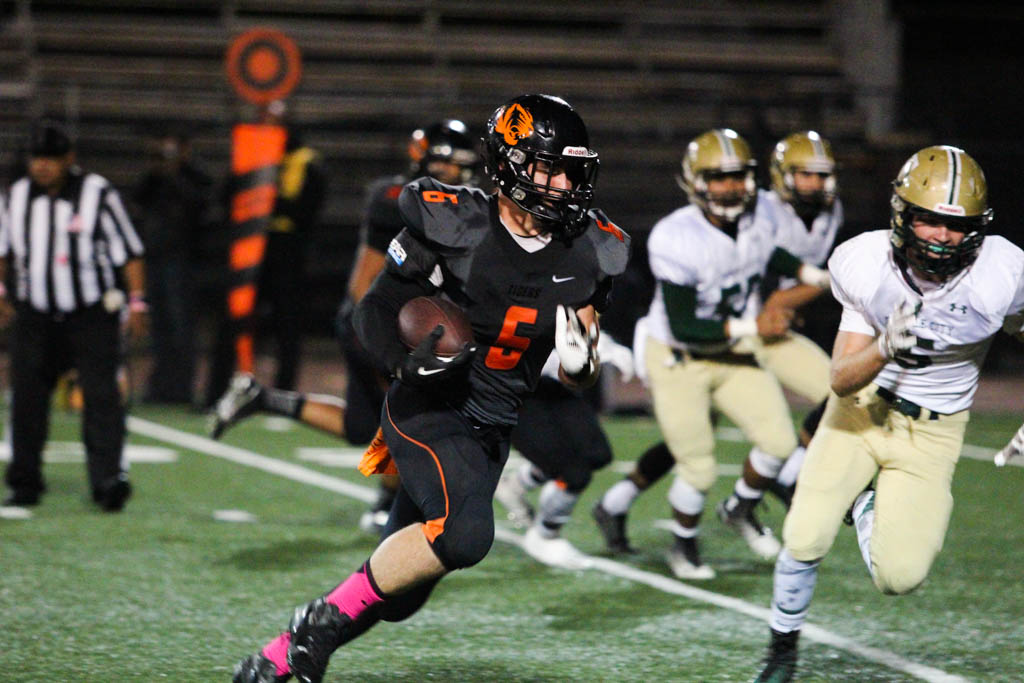 The South Pasadena football team showed up big with a convincing 41-18 win over the Temple City Rams Friday night. The South Pas crowd packed into the home bleachers with rally towels in hand to support the football team in its last home game of the season, only to be emptied again by a sudden heavy overcast with four minutes left in the game. By then, however, the outcome had already been decided, and the Tigers now evened their record in league play at 2-2, 6-3 overall. In addition to the halftime homecoming festivities, all fifteen senior players were honored with their families before the start of the match on the team’s senior night, this being their last home game.

Senior Ernesto Jauregui rushes the ball for one of the Tigers’ 6 running touchdowns in their 41-18 win over Temple City.

All throughout the season, the Tigers were known to come out quick with an abundance of energy. Friday’s game started no different, as sophomore kick returner Jalen Ross brought the opening kickoff back 68 yards. After a 13 yard rush by senior Matt Ayala, a 22 yard pass and run by junior Max Luck was called back after a late penalty call. Junior fullback Jeremy Gabler then capped the drive off with a 33 yard rush for a touchdown, making the score 7-0 just under two minutes into the first quarter. The Tigers defense was led by dominant senior defensive linemen Jeremy Escandon, Mazen Elhossseiny, and Kyle Marrujo. South Pasadena stopped the Rams from reaching it’s own half of the field after a 4th down conversion was stopped by Ross, who was in at cornerback. Senior halfback Ernesto Jauregui led the next drive on the ground, breaking numerous tackles from Ram defenders, and gaining crucial yardage down the sides of the field. At 3:37, a catch and run by Gabler set Ayala up for a quick 7 yard counter for another touchdown to make it 14-0 in favor of the Tigers.

“Our rush blocking was incredible this game,” Luck said. “We really stepped it up big time, and I think our team really fed off that energy.”

The second quarter began with Temple City threatening on the Tigers’ goal line. The Rams generated a majority of their offense through the air, led by wide receivers Chris Rabine and Paul Kosanovich. A short touchdown pass to Rabine brought the game to 14-6 after a missed extra point attempt. The Tigers, however, would continue their offensive authority with a nice 25 yard rush by Jauregui bringing the Tigers back to the Rams side. After a screen pass to senior Alton Phillips brought the ball 40 yards down field, Gabler would register his second rushing touchdown of the game, raising the Tigers’ lead to 21-6. Five minutes later, the Rams would score again, but an incomplete 2-point conversion kept the game at 21-12.

The Tigers would score one last touchdown as a result of another electric kick return by Ross that brought the Tigers to the 50 yard line. Jauregui took another handoff and made his way to the endzone to put 27-12 on the scoreboard. As the Rams entered the red zone in the final seconds of the half, junior safety Emiliano Sornoso intercepted the ball within the Tigers’ ten yard line. The Rams showed a respectable hustle, and prevented Sornoso from housing the pick after he had already returned it for 70 yards. The half ended with the Tigers on top 27-12.

Sophomore Jalen Ross returns a kickoff in the Tigers’ 41-18 win over Temple City.

“It was a great feeling to get that interception,” Sornoso said. “All I could really think in my mind was to put my head down and keep running.”

The Rams would start out the second half with a series of great passes to bring them within striking distance again, until Sornoso once again intercepted the ball again and returned it for 32 yards. An Ayala touchdown rush would bring the score to 34-12, placing the Tigers well beyond reach of the Rams.

The Rams hadn’t given up hope by the fourth quarter as running back Nick Starling punched the ball into the endzone for a Temple City touchdown, but the Tigers defense again stopped the 2-point conversion keeping the score at 34-18. Despite recovering the onside kick, Temple City would not see the end zone again. South Pas scored with five minutes remaining with an 18 yard rush from Jauregui, and the heavy downpour would unofficially end the game early at 41-18. Senior kicker Yasunori Iwayanagi ended the game 6 for 6 on extra point attempts.

The Tigers, who are now tied for third in league, could qualify for a CIF playoff spot with a win against La Cañada next Friday.

“It would mean the world to us if we were to qualify for CIF. It hasn’t happened in a long time,” Luck said.

The closest the Tigers have ever gotten to CIF in the past five years was in 2010, when the Tigers tied for second in league with both La Cañada and Temple City.