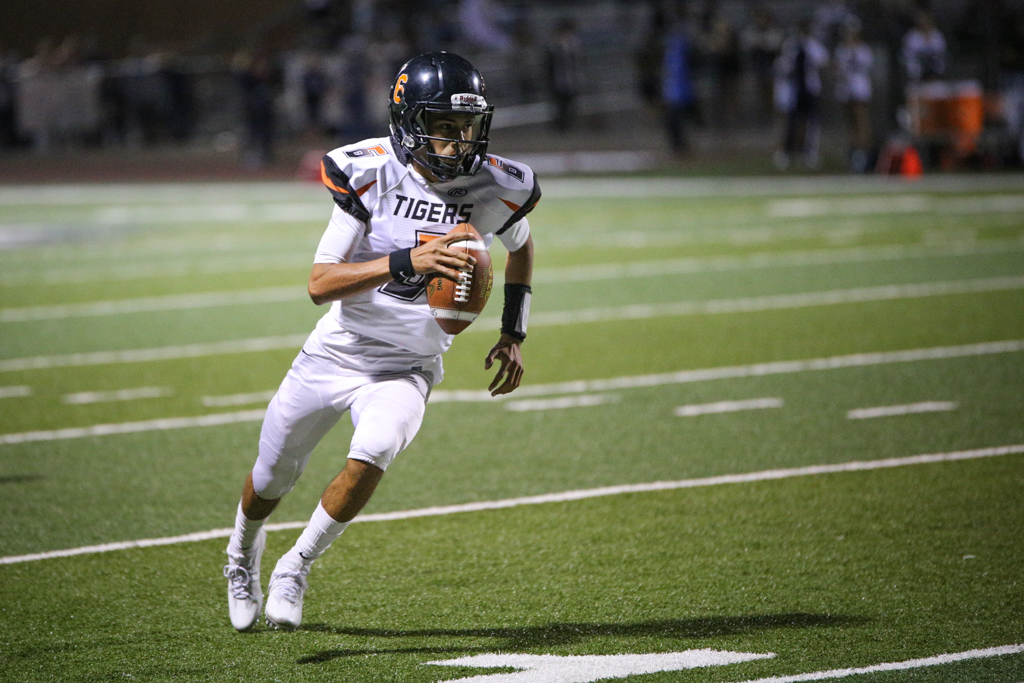 South Pasadena’s varsity football team cruised to a 51-0 victory over the Gabrielino Eagles on Friday, September 30 on the road. With this substantial victory, the team now holds a 4-1 record in preseason play.

South Pas pushed back the Gabrielino defense early on with several successful runs. Senior Jalen Ross kicked off the game with an 11 yard reception to the Tigers’ 48 yard line. Ross would strike again soon after with an eight yard rush to the 40 yard line. Soon the Tigers would be faced with a fourth down, but junior Jackson Totleben pushed the Tigers to a conversion and place them in a good position to score. South Pas would face another obstacle when the team was flagged for a false start, but Ross once again stepped up with a 15 yard catch, putting the Tigers in the red zone. Senior quarterback Adam Arellano would capitalize on this offensive position with a touchdown run to make the score 7-0. The Eagles came back with a vengeance in their next run, putting pressure on the Tiger defense. However, senior defensive end Max Lockridge stopped the Eagles from advancing further with a tackle to force a Gabrielino three and out.

Running back Ken Iwane charges through defenders for a first down.

The Tigers were ready to distance themselves from the Eagles in the second quarter. Totleben immediately put South Pas in a good position to score by breaking loose for 24 yards, down to Gabrielino’s 18 yard line. Ross would be the one to capitalize with a 16 yard catch and four yard touchdown run past Gabrielino defenders to give the Tigers a 14-0 lead. South Pasadena’s defense contained Gabrielino in their next attempt to give the Tigers their next offensive drive. Senior Ben Quirk brought South Pas within striking distance with a 35 yard reception to place the line of scrimmage at the Eagles’ five yard line. Ross capitalized the offensive run with a three yard touchdown run wide right to make the score 21-0. Soon after, Ross earned his third touchdown of the night, making the score 28-0. South Pas would capitalize on their monstrous second quarter with a field goal, extending the lead to 31 points.

The second half proved to be very similar to the first. Early in the third quarter, South Pasadena forced an Eagle three and out. On the ensuing play, senior Anthony Seguin blocked the Gabrielino punt. Lockridge scooped the ball up and carried it all the way to the house for the Tigers’ fifth touchdown of the game. Later on in the third, the Tigers benefitted from another blocked punt, this time by Totleben. Totleben recovered the ball himself and ran it 60 yards down the field for his first touchdown of the game and the team’s sixth. At the end of the third quarter, the game was all but over. South Pas held a commanding 45-0 lead.

Jackson Totleben wraps up the ball carrier in the fourth quarter.

The Tigers eased up in the fourth quarter, with many reserve players replacing the starters for the entire period. The team was still able to hold Gabrielino scoreless throughout the quarter, and after a late touchdown from Seguin in garbage time, the Tigers walked away with an incredible 51-0 win.

“It’s unbelievable what happened today,” Lockridge said. “Our team was able to perform well, everyone was executing, and many players were able to gain a lot of playing time. Obviously it’s a big win for us since league starts next week, and we have a lot of momentum heading into it.

The Tigers’ next game is the highly anticipated Color Day matchup against Temple City High School on Friday, October 7. South Pas will host and look to win their first Rio Hondo League game.