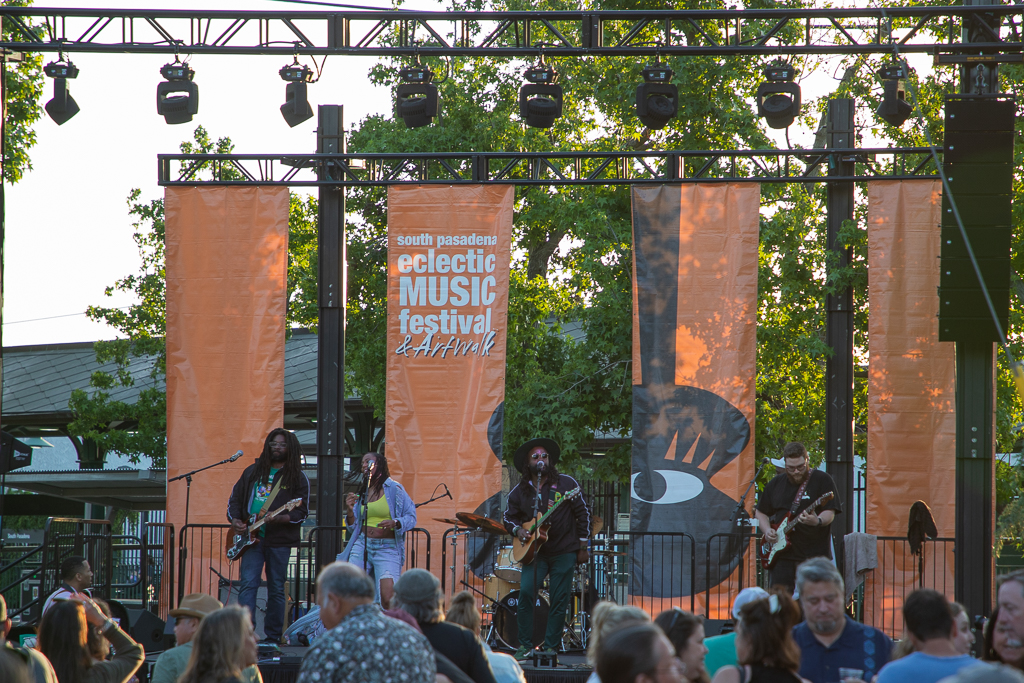 One could purchase Kettle Corn and Mammas Pizza, then drip grease while perusing the vintage clothing stores. R&B and Soul artist Lulise started off the performances on the Gold Line Stage and had a visceral bass and a folksy sound.

The Eclectic Music Festival returned to South Pasadena for the first time since the pandemic on Saturday, Apr 30 offering attendees vintage shopping, farmer’s market staple foods, and live music from both outdoor and indoor venues.

Sponsored by the South Pasadena Chamber of Commerce, the Eclectic Music Festival showcases musical and artistic acts around South Pasadena. Many shops opened their fronts to customers or loaned the space to new businesses, but it was a communal experience that had not existed for two years.

Artisans Alley housed a variety of clothing vendors along with food stands. Where the farmers market usually is, a few stands from the market cropped up. One could purchase Kettle Corn and Mammas Pizza, then drip grease while perusing the vintage clothing stores. R&B and Soul artist Lulise started off the performances on the Gold Line Stage and had a visceral bass and a folksy sound. The vendors stretched to El Centro street who all sold a variation of vintage clothing.

Turning the corner to the library, the Community Room stage and surrounding grassy knoll packed in spectators to view the SPHS jazz band. The band served classic brassy hits in their set. Veering into the parking lot of the old administration building, one is greeted rows upon rows of other farmers market favorites like stuffed crepes and roasted corn. Twoheys had a truck as well. Opposite them, more clothing sellers as well as artisan booths opened up. Also a yoga studio and South Pasadena Arts Council Center (SPARC) provided various arts and crafts like personalizing blank DVDs.

Downtown Los Angeles’s Moby Arts Gallery displayed ‘serigraph printing.’ Serigraph is a stencil based printing in which ink is forced through a fine screen onto a sheet of paper. One specific collection by local self-taught artist, Amy Smith, depicted famous women in history.

A collage of Stacey Abrams against a background of Georgia peaches. Abrams, herself, is composed of prints of her alma mater, Spelman College as well as her legislative history. Frida Kahlo’s fabric was sewn from ‘Si Se Puede’ or ‘Yes You Can’ in Spanish.

“We get to open up the collection to a newer broader audience and represent the local Los Angeles artists,” Natalie Gonzalez, founder of Moby Arts, said.

Outside of Anna’s boutique there was balloon twisting for free where children gathered to watch the two practitioners contort balloons into animals. Hotbox Vintage showcased two indie acts in their patio stage next to featured artists. Square deal barbershop had local artist Maddie Saunders selling jewelry. Next to hotbox vintage, The South Pasadenan sold classic rock memorabilia including pins and vintage rock magazines alongside their newspaper.

SPHS alum Sophie Reynolds took to the stage at Jeweled Universe beginning with her song ‘I’m Down’ soulfully vocalizing. Her hour set was a gorgeous blend of heartfelt sounds and a rich tone. Jeweled Universe began their music at 3:00 with two half hour sets followed by six soloists with hour sets, including Reynolds and a later flamenco musician. Outside the Jeweled Universe an employee taught how to bedazzle one’s teeth among other items of jewelry, hopefully to bedazzle other body parts.

“It was beautiful to see the community coming together to celebrate The Eclectic, a much-loved event that we have dearly missed. The town was abuzz; you could feel the joy in the air and a collective exhale and smile. Thank you to all the musicians, artists, vendors, facilitators, businesses for making this day such a success,” event coordinator Angelina Coppola said.

The fun-filled Festival provided eclectic entertainment for local South Pasadenans as well as Angelinos. Although the vendors emerged from their mercantile fleet for seven hours, the music that surrounds their stands provided a fulfilling ambience.