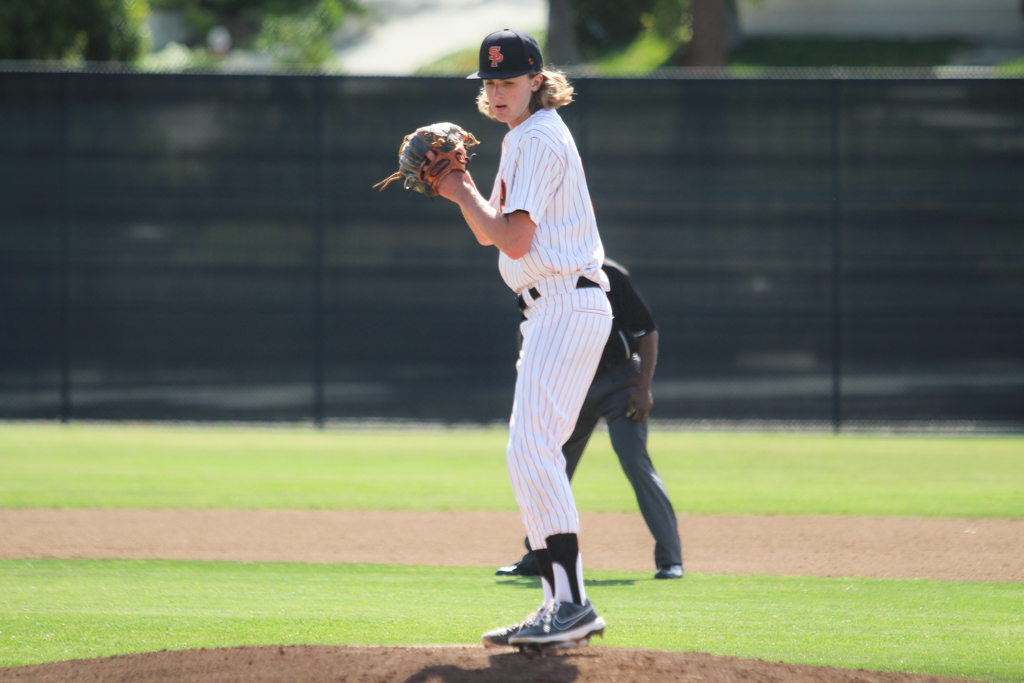 The Tigers struggled to keep up with the Mustangs and they eventually fell 5-1.

Baseball earned a berth in CIF playoffs with a successful season, finishing in third place in the Rio Hondo League with a 7-5 league record and 15-8 clip overall. In their CIF opening game, the Tigers found themselves on the wrong end of a 5-1 contest, losing to the Salesian Mustangs at East L.A. College.

The Tigers were retired in order to start the game. In the bottom of the first inning, sophomore Nolan Adams surrendered a leadoff double and a walk but was able to work out of the jam by inducing a ground out, pop out, and strikeout.

In the top of the second, senior Garrett Haley reached base on a dropped third strike. Haley stole second base and was advanced to third on a productive groundout by sophomore Devin Robinson. After a strikeout, junior Jason Yipp smoked the ball but hit it right to the third baseman. The bottom half of the second was a rough one for the Tigers, allowing two runs. After senior and Bard commit DJ Pearson flashed the leather on a nice defensive play, a walk, RBI single, and botched first and third play gave the Mustangs an early advantage. Defensive miscommunication proved costly for South Pasadena.

The Tigers went quickly in the top of the third inning. Senior Jack Riffle crushed one to deep left field, but the Salesian outfield robbed him of extra bases with an over-the-shoulder catch. South Pasadena would fall into an even deeper hole as Salesian posted two more runs in the bottom of the third. The top of the Mustang’s lineup continued to produce, beginning the inning with a single to right and a single to left. A swinging bunt advanced both runners, and they would both come around to score on a two-run single. A nice grab by sophomore Luke Riffle and strong play by junior Quinn Stirling helped prevent further damage.

Pearson led off the top of the fourth inning with the Tigers first hit but was quickly erased on a caught stealing. South Pasadena had an opportunity to chip into the deficit after Stirling’s walk but failed to convert baserunners into runs. Pearson also contributed defensively, catching a pop-up in short right field. After a single up the middle and a walk, both runners tried to advance on a ball in the dirt. Junior Ivan Becerra blocked the ball with textbook fundamentals and fired the ball to third, where the runner looked to be out. However, a questionable safe call from the umpire gave the Mustangs another favorable situation, one they took advantage of with a sacrifice fly. After four innings, the Tigers trailed 5-0.

Becerra grounded out to shortstop in the top of the fifth inning. Yipp beat out a ground ball to shortstop for an infield hit, and stole second on a close play. Adams advanced him to third and L. Riffle came through to give South Pasadena their first run off the game. L. Riffle blasted one to right field, scoring Yipp. The ball got past the right fielder and L. Riffle blazed all the way to third, clapping his hands in celebration as the Tigers got on the board. Senior Alex Hodis came on in relief for South Pasadena and used a strong fastball/slider combination to keep Salesian off balance. Two strikeouts and a flyout kept the bottom of the fifth inning short.

In the bottom of the sixth, Pearson was robbed of a hit on a ball he smoked up the middle. It appeared to be heading for center field, but the ball deflected off the pitcher and ricocheted right to the second baseman who threw out Pearson. Senior Joe Kazarian, who has a home run to his name this season, pinch-hit and tried to spark the rally. However, he struck out. Hodis continued to silence the Mustangs in the bottom of the sixth, striking out their leadoff hitter who haunted the Tigers all night. Hodis picked off a runner after an infield single. A groundout to Pearson later, and Hodis had worked three scoreless frames to cap off his Tigers career.

The Tigers went quietly to end the night and lost 5-1. Despite the disappointing ending, South Pasadena has now notched consecutive CIF appearances, a streak they’ll look to continue next season.

Pearson, J. Riffle, Kazarian, Hodis, Haley, and seniors Johnny Guy, Lucian St. Vaughn, and Ovy Garcia had exceptional careers for South Pasadena baseball and will leave behind large shoes to fill. Robinson, Adams, L. Riffle, Yipp, Stirling, Becerra, and others are prepared to fill that void and step up as the stars of the program next season.

City Council approves Fourth of July theatrical presentation ‘We, too, are Americans’