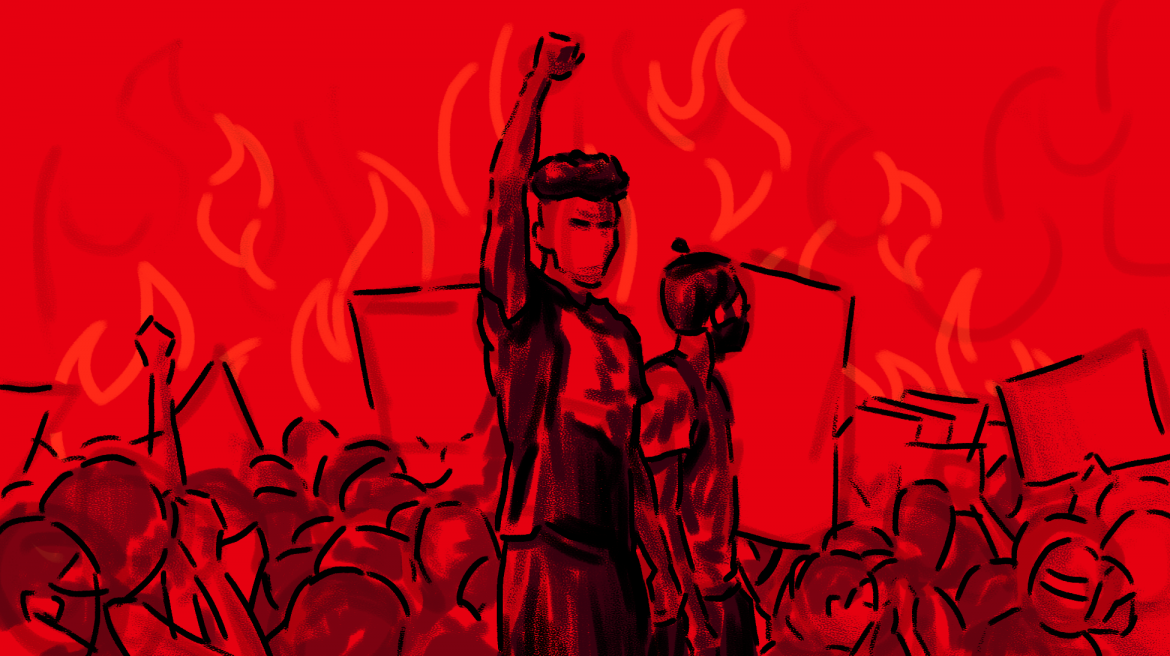 Between the rough transition of presidential power, coronavirus relief efforts, and attempted coups, 2020’s Black Lives Matter protests seem almost like a distant memory. As the protests themselves become cemented in history books, so too will the context surrounding them fall into obscure detail. Those not involved with protest movements see news footage of burning buildings and street brawls with cops, and are left wondering “why can’t these protestors just be peaceful?”

This same critique has been applied to a number of historic protest movements, ranging from the civil rights movement to the Stonewall riots, but there is undeniably a common trend: despite (in some cases) history’s absolution of these movements, almost every protest movement in America has been met with a public demand for peace. Even leaders that we now use as the model of peaceful protest were lambasted in their day for even the slightest inclination of violence caused by or otherwise related to their existence (think MLK). If all protest movements are to be met with a demand for pacifism, what does pacifism in protest really mean?

The term “protest” is an umbrella term that refers to any kind of organization against an equal or higher power. For the sake of simplicity, the idea of protest can be broken down into two main categories: protest of the state and protest of industry. There is also the counter-protest, but this is much harder to speak about generally as all counter-protest movements must be viewed relative to the original issue being protested.

The key and most obvious difference between these two forms of protest comes down to who is being protested, and by extension how protests are going to be responded to. In essence, a protest against Walmart is fundamentally different from a protest against the police, as Walmart has no financial interest to “fight back,” as they do to ignore the protest entirely (also because they know that the state will protect them). Understanding this distinction is vital if one wishes to proceed as an advocate for pacifism.

First, the peaceful protest of industry. It is important to note that the protest of industry can only occur in a capitalist society. With this, it is no surprise that the “goal” of those protesting industry is to disrupt the target’s production of capital to a point where the demands of protestors are heard. It is far more reasonable to demand a peaceful response from industrial protest, as despite the overwhelming presence of monopoly, most American businesses still operate with the public as their primary consumers.

This means that tactics such as boycotts, unionization, and a demand for state intervention are all methods that have proven effective, and don’t seem entirely unreasonable to demand of protestors. That said, it is still worth noting that organizing efforts against massive corporations, like Amazon and Disney, requires an amount of public cooperation that far exceeds the scope of reality.

More importantly, it’s not nearly that simple in America. Not only does the state work in large part to protect corporate interest (i.e. the police stopping you from attacking a Walmart store), but corporations are often just as capable of inflicting violence as the state. Though Amazon probably isn’t going to directly attack you, the ability to survive in America rests entirely on the private sector. Food, water, healthcare, etc. are all basic human necessities that can be deprived on a whim, so it follows that these corporations are entirely capable of state-endorsed violence. (for those that think this point is a bit of a stretch, think business refusing to serve Black Americans, gentrification making basic human resources unaffordable to the local population, etc.)

Demanding peaceful protest of the state is significantly more complicated. Political philosopher Max Weber defines the state as a group that has the monopoly on violence in a given area. In essence, Weber’s definition argues that by supporting any political system, one is also supporting the violence necessary to enforce said system. Unless one believes in the abolition of borders, then one must believe in the violence necessary to maintain those borders, and this same logic can be applied to just about any facet of government.

This means that if one is to understand the state as necessarily having to assert its authority through violence, then one must also recognize that protestors of the state will be subject to such violence. We as a society know that protesting the police will lead to a violent response from police, and thus this same lens must be applied when demanding peaceful protest. When one demands that protestors abstain from violence, they are essentially asking the protestors to subject themselves to state violence and not fight back.

In some ways, this request can be seen as somewhat reasonable. Peaceful protestors being subject to state violence is often a striking sight, and in theory should lead the public to side with protestors. Despite this, it is important to distinguish the difference between cries for pacifism and cries for martyrdom.
To understand when to call for pacifism, it is vital to fully conceptualize the meaning of self-defense, and internalize that it’s not always a response to direct, physical harm. When we live in a country where police have what resembles complete freedom in who they choose to execute, a country where immigrants are separated from their families and placed into detention centers on arrival. We must understand that protest against these systems does not come from a background of peace. Cries for peace directed at the BLM movement speaks not to any violence within the movement itself, but rather to the fact that state-sponsored violence has become such an accepted part of everyday life that it can be misconstrued as peace.