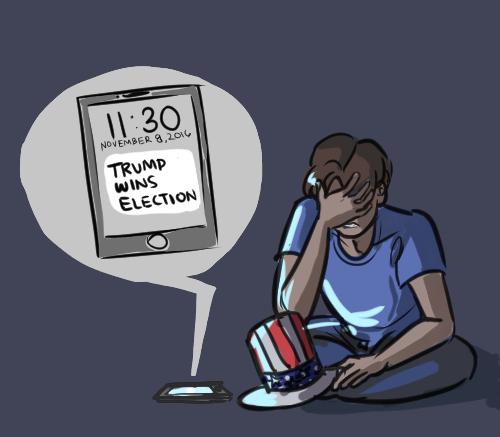 For many, the passing day has been spent trying to cope. In a surreal break from reality, shattering the liberal, upper middle class bubble that many of us have grown up in, Donald Trump has won the presidency. This once unthinkable truth is just starting to settle in.

We have heard again and again just how dangerous this authoritarian anti-establishment figure is. We are constantly reminded, to a degree of almost morbid fascination, of his ridiculously misogynistic bombast. In his rise to near mythological status, Trump has shown us that there is an entire America we do not know; one that has long been resentful towards the decline of white homogeneity.

But no matter how many times we hear these things, it is still difficult for young, insulated liberals to fathom the America that Trump tapped into. It calls into question everything we know about this country and, for many of us, makes the future far less certain.

I was reminded of the magnitude of last night’s event when I woke up this morning. My mom was crying, and yes, the New York Times notification stuck to my phone’s background screen was still there; none of it was a dream.

This morning, my mother, a Taiwanese immigrant, told me that she has never truly felt safe in this country. For an immigrant, life is lived with a constant anxiety. It is not something that I fully experience myself, but I have seen the struggle peripherally. The constant fear of the invisible line that separates the outsider, the subversive stereotypes that define identity, the looming shadow of racism that is America’s history. These are the things that she lives with, that have helped define the trajectory of her life. With Donald Trump’s rise, that fear is more palpable than ever before.

President Obama brought a sense of pride to my mom’s American identity. He validated the in-between that defines the immigrant experience. I will always look back on that moment of excitement in my youth, watching Obama win the 2008 election, and remember just how monumental it was: a man of mixed race, brought up by a single mother, became the leader of one of the most powerful nations on earth. That night represented the plurality and open mindedness that America holds above all else—or so I thought.

Trump’s ascension to presidency, while startling, is a wake up call for those of us who have only known the interior of an accepting, liberal, suburban environment under a progressive executive administration. The study of history has taught us that racism and xenophobia are this country’s original sin, but to actually experience these things come into the national spotlight rips apart our preconceptions of the America that we have come to know.

The issues and topics that, for so long, have had a certain sense of distance are now brought to the surface of our society. Women’s rights, immigrants’ livelihoods, and minorities’ safety are threatened in a way that is unprecedented in our lifetimes. The underpinnings of a white America previously unknown to me have made a violent comeback. It is now that we are faced with the true conscience of America, one whose decisions and prejudices are invariably rooted in historical racism and malice. These are the things which manifest the constant anxiety of the immigrant, have plagued the lives of Americans like my mother, and have now brought a rude awakening to the insulated liberal.

Football falls to Aquinas in first round of CIF