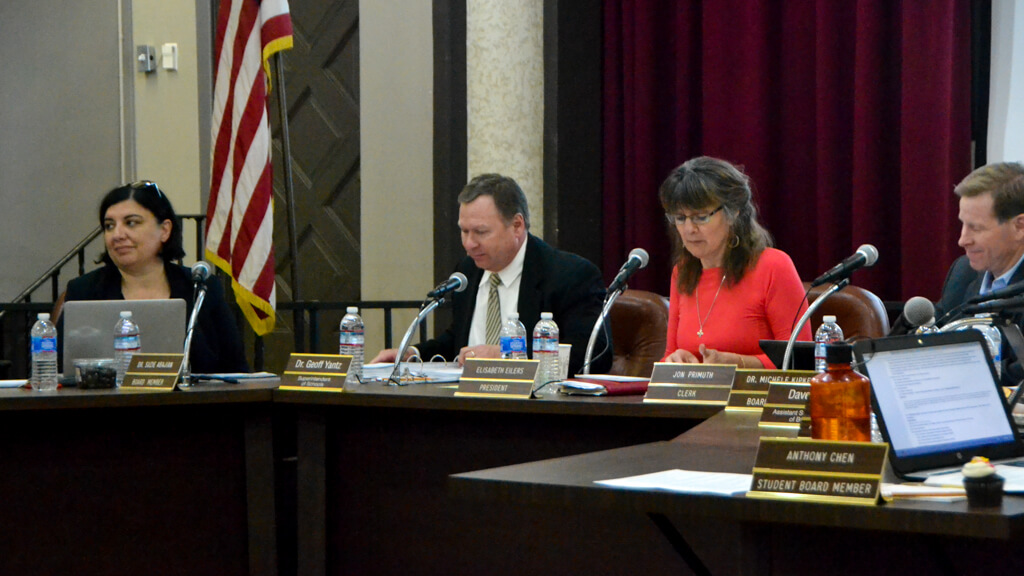 Citizens participated in a public hearing regarding the South Pasadena Middle School’s old gymnasium complex at the SPUSD school board meeting on Tuesday, March 15. The school board has previously discussed the possibility for refurbishing or rebuilding the gymnasium. Individuals from SVA architecture group also held a presentation detailing the proposed project. Possible plans for an updated facility include a black box theater, tech / robotics lab and an art classroom.

Middle school science and robotics teacher Emily Williams spoke in favor of a complete remodel, citing extreme issues with the current configuration. Her list included live termites falling from the ceiling, rotting floors that cannot support weight, and a lack of disabled access.

Middle School teacher Emily Williams advocates for a complete rebuild of the structure.

Community member Lynn Tavarozi spoke on behalf of the residents of the 1700 Block of Rollin Street which was partially vacated and closed off in order to expand the middle school. Tavarozi talked about protecting the residents around the construction site, including maintaining the commitments stated in the original vacation resolution which was created as a prerequisite to the vacation of Rollin St.

The gym, which was constructed in 1928, was identified as eligible for local historical registry if proclaimed by the city. Although the structure has not been enrolled as such by the city, , national, state and environmental laws do not differentiate between the potential and registered sites. If federal money is involved in the construction, conservation alternatives must be considered. The City of South Pasadena has a history of preserving significant structures. The city also used historic preservation as a means against the construction of the 710 freeway as resident John Lesak pointed out in an argument against a complete rebuild.

Approval to perform a historic resource evaluation of the gym by MIG Inc. passed unanimously. The group will conduct an assessment and then report back to the board at a later date.