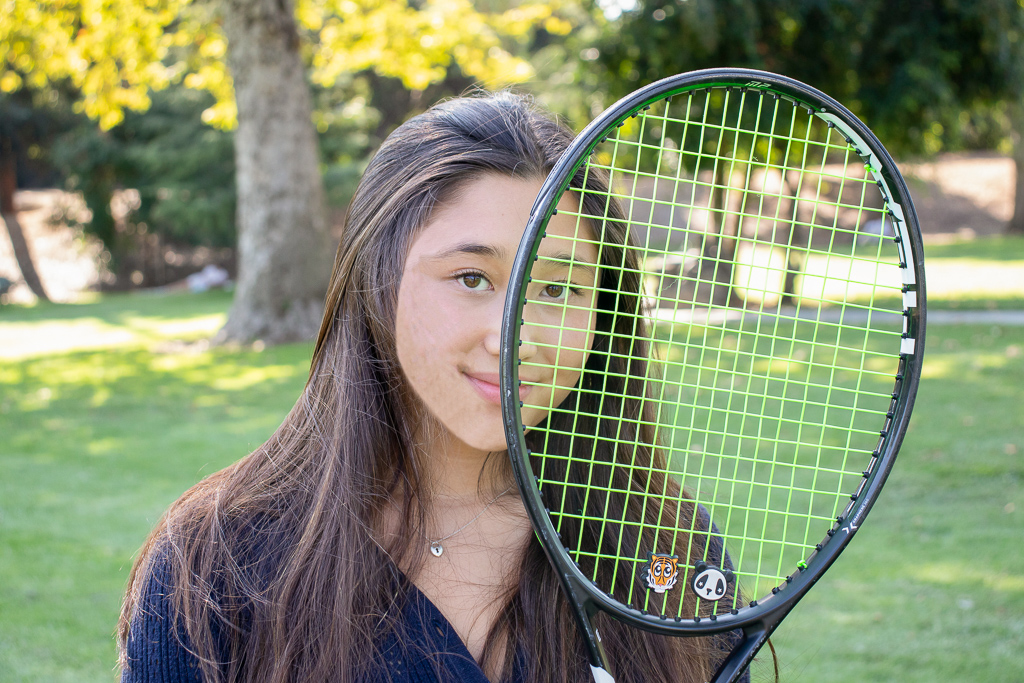 Sophomore Charlie Kami-Duffin is a bubbly cocktail of infectious optimism and an unshakeable sense of determination.

Charlie Kami-Duffin is never not doing something. When this SPHS sophomore picked up the phone, she was half way through her precise recipe for microwaved popcorn.

“The trick is,” Kami-Duffin said, “to leave it in for a minute and 11 seconds, to get the perfect crisp. I have popcorn down to a precise science. An art-form even.”

While this quote may seem innocuous, it is indicative of Kami-Duffin’s outlook on life. Kami-Duffin has now entered her second year at SPUSD, and has made a name for herself by doing whatever she can to spread positivity. Kami-Duffin’s infectious energy is immediately apparent, and she makes it a point in life to find the most joy in everything she does, even in hard work.

Kami-Duffin applies this attitude both in and out of school. She joined the tennis team in her first year at SPHS. When she wasn’t playing, Kami-Duffin was cheering on her teammates from the sidelines, an enthusiasm that was appreciated by the entire team. She was more than happy to have her efforts recognized in the form of the “most team spirit” award.

“While I didn’t win MVP, I won the award for team spirit, which is kind of like MVP. I like to think of it as like the MVSP. Most valuable spirit person. While my enthusiasm was not always thoroughly appreciated by my teammates, I like to think that my spirit helped everyone play at least a little bit better. Being passionate is really the only way to compete with being talented.”

Kami-Duffin has also applied this enthusiastic outlook in her personal life, as it has helped her stick to many goals. Whether it be playing the piano or sticking to a keto diet, she finds joy in the little things. At this point in the interview, Kami-Duffin had gotten up to feed popcorn to her sea turtle, which had made its way into her room.

“I’ve been doing keto for 8 months, and it’s super hard. But cooking keto stuff is so fun. You have to get weird almond flour and psyllium husk, And it felt kinda goofy making bread without carbs, but it was super fun. I feel like it’s really important to find fun in challenges. It just makes things a lot more bearable.”

Coming to SPHS in her freshman year, Kami-Duffin faced the inevitable challenge of being “the new kid”. While she struggled with this at first, Kami-Duffin saw coming to a new school as a chance to grow and change as a person.

Going into her sophomore year, Kami-Duffin hopes to maintain the positive attitude that has gotten her through high school this far, and to spread that positivity to her peers, despite the difficulty of having limited social interaction in her online classes.

“Online school is super difficult for me,” Kami-Duffin said. “Not having the ability to talk to people has really drained me. I just try to have as much fun in breakout rooms and class discussions as possible. The thing I miss most about school is getting to spend time with people who make me happy.”

Sophomore Sam Grotenstein (he/him) is in his first year as a staff writer, and is excited for his first year with tiger. When Sam is not writing, he spends time gardening, reading, playing the guitar, or maybe even vibing out to some Kanye.