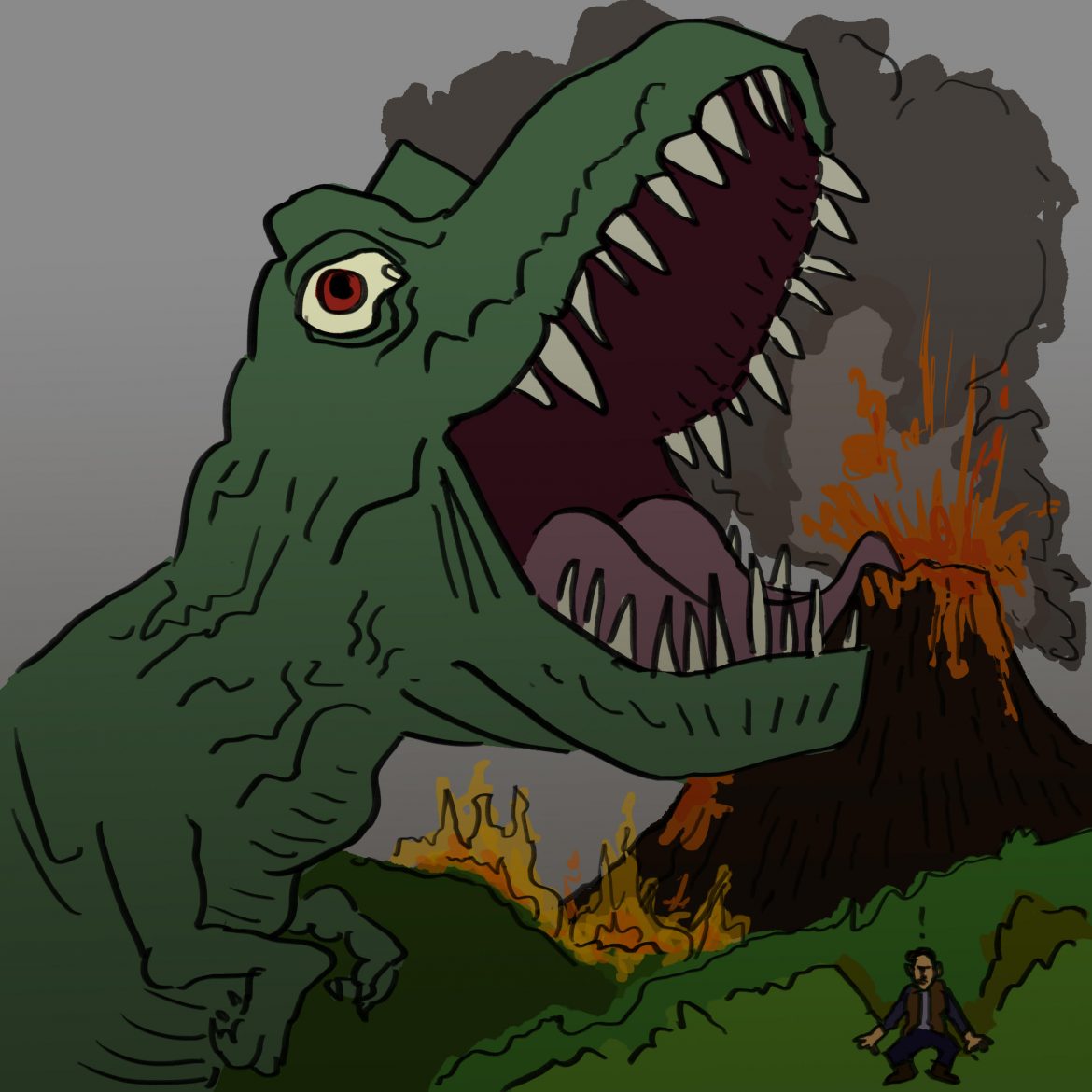 Jurassic Park: Fallen Kingdom meets the expectations of its thrill-seeking fan base, relying on dramatic visual effects and constant action to compensate for an unimaginative storyline.

Fallen Kingdom is set in a theme park on the coast of Isla Nublar in an era where genetic-altering technology is possible. This sci-fi action film begins with a dilemma: a volcanic eruption threatening to abolish eleven dinosaur species. Eli Mills (Rafe Spall), the main antagonist and assistant of one of the co-founders of Jurassic Park, presents a plan to former park manager Claire Dearing (Bryce Dallas Howard) with the objective to save the species from extinction. Among the rescue group are animal behavior expert, Owen Grady (Chris Pratt) and Dearing’s assistants: Dr.  Zia Rodriguez (Daniella Pineda) and system analyst, Franklin Webb (Justice Smith).

With the rescue group kept in the dark, Mills’ ulterior motives were to use Dearing’s tracking system to determine the location of Blue the velociraptor in order to auction the dinosaurs to bidders in Northern California. After they were able to track Blue, the rescue group is left behind and the volcano coincidentally explodes. From that point, everything goes downhill.

Jurassic World: Fallen Kingdom boasts dramatic visual effects and non-stop action, successfully captivating its audience at every plot twist. From lava and falling rocks to dinosaur attacks, each scene delivers the perfect combination of adrenaline and suspense. Director J.A. Bayona puts the audience’s nerves on edge with heart-wrenching interactions between Grady and Blue. Additionally, Dearing’s improved look from a business suit and high heels to outdoor wear and boots symbolizes an empowering sign of female fierceness and willpower. Another essential character is Maise Lockwood (Isabella Sermon): she displays a heartfelt relationship with her grandfather, Benjamin LockWood, who helped develop the park, and her curiosity and energy add another dimension to the movie.

Although Fallen Kingdom demonstrates excellent cinematography, the timing of the scenes was awkwardly illogical and fast-paced. The script lacks a consistent plotline and focuses mainly on purposeless chaos showcasing the stampede of panicked dinosaurs. Furthermore, despite all the obstacles and danger that Brady and Dearing faced on the island, the two main characters did not reveal any romantic attraction for each other. The audience can easily distinguish the unnatural chemistry between the two, where they do not work together effectively. It is safe to say that their performance of love was utterly disappointing.

Despite the predictable plot of the movie, the cinematography and intricate yet gory details make the two hours tolerable. Jurassic World: Fallen Kingdom is a movie made for the adrenaline and action seekers. While the spin-off doesn’t do the original series justice, the graphics compensate for the plotline, making the audience truly feel like they’re experiencing these amazing dinosaurs firsthand.