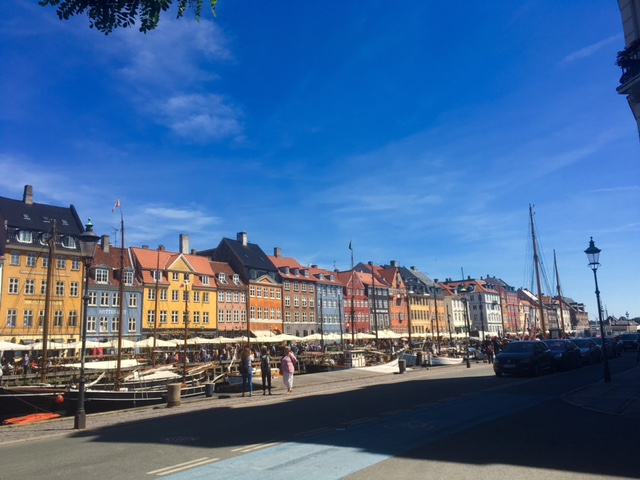 Denmark has earned a reputation as one of the world's happiest places. Colorful businesses alongside the canals perfectly represent the life of serenity and relaxation that many Danes enjoy.

The sun burst through my hotel window at a painfully early 3:00 a.m. Summer days in Copenhagen begin then, and last until the sun sets at 11:00 p.m. I winced at the light and flipped onto my stomach, to the annoyance of my sister. When I woke up later at a more reasonable time, I struggled to get out of bed, still exhausted from the previous day’s nine-hour flight and hindered by the sheer lack of room. Hotels in Europe are notoriously small, and ours was no anomaly. But, the small lodging was not overly bothersome, as most of my time was spent exploring Copenhagen. Copenhagen was the start to our short, two-week vacation in Scandinavia. The city was an amazing introduction to our explorations as first-time visitors.

As my family and I searched for breakfast, we were fortunate to stumble upon a cozy cafe at the bottom of a small staircase. Many businesses in Copenhagen are located below ground level, basement-esque, to maximize all available space. The aroma of sweet sugar and fresh coffee wafted through the cafe. I devoured my “breakfast,”  kransekage (almond cookies filled with marzipan and drizzled in icing). It was not exactly the balanced breakfast one should begin the day with, but hey, when in Copenhagen…

We maneuvered through a crowd of bikes as we exited the cafe. Everyone bikes in the city. Each building we passed housed its own fleet. We walked to and up the Round Tower, an iconic old observatory. I was struck by how small Copenhagen looked from a bird’s eye view; its beauty and quaintness became far more apparent. It was unlike what I had experienced before — feeling larger, rather than tinier, looking down on a city.

I bunched my hair up into a bun as the heat started to take its toll. We walked over to a plaza full of restaurants. They were small set-ups, with partitions dividing the various vendors. I ordered a simple vegetarian sandwich from one of the first shops, while my sister opted for a chia bowl and my parents shared a large oatmeal bowl. All the food was fresh. I had noticed that Danes lead a very healthy lifestyle, prioritizing organic, locally grown foods. I thought about how, half a world away, America lacks this focus on pure, natural foods. It was a manifestation of the varying priorities in different cultures.

With newfound energy, we journeyed through a nearby garden where we enjoyed the rural aspect of Copenhagen. My sister and I took photos of a swan and her ducklings as my parents strolled and discussed the Danish lifestyle. Danes seem very relaxed, perhaps it is the free health care and education, or the healthier lifestyle, some of the main causes of stress in the United States, that make Denmark one of the happiest countries in the world.

The landscape quickly changed from forest to ocean. Boats flocked to the edge of the rocks, filled with tourists trying to take pictures of the famed Little Mermaid statue, a tribute to writer Hans Christian Andersen. We sat down on a nearby bench and took in the view. I no longer felt warm, as I was licking an ice cream and enjoying the cool sea breeze.

The next day, we went to Tivoli, one of the most popular attractions in Scandinavia. Tivoli is a large amusement park, credited as Walt Disney’s inspiration for Disneyland. Its rides were similar to those in America, but Tivoli had a more desired atmosphere. When I entered the park, the urban setting morphed into a storybook environment. Bright flowers layer bushes and cobblestone streets while ornate fountains add to the charm.

Right by our hotel, there was a small, dirt-ground, park with a few tables. The otherwise boring space did, however, have five trampolines. My sister and I found this so remarkable — no play structure, no slides, no swings… but trampolines! We enjoyed jumping every day, whether our day involved a simple trip to a restaurant or a hike throughout the entire city. Wide, cartoony smiles spread on our faces when we looked out, spun around, and captured Copenhagen in a glance. With my hair in the wind, I could see my parents taking photos with grins stuck on their faces, my sister laughing with glee, and Copenhagen. All of Copenhagen, in just one jump.

How to Arrive in Copenhagen: There are various routes to arrive in Copenhagen: airplane, train, car, and cruise. The distance to Copenhagen from Los Angeles is rather substantial (5,590 miles), so the flight travel is the most efficient choice. The option of flying is popularized by the fact that the Copenhagen airport is the busiest in the Scandinavian region – which includes Norway, Sweden, Denmark, Finland, and Iceland. I personally took a non-stop flight to Copenhagen, which lasted nine hours. However, if one is venturing throughout Europe anyway, traveling by train is a simple method of transportation. The Eurail and Eurostar train systems link Copenhagen to other major European cities, like Brussels or London. Most exciting, though, is the prospect of arriving in Copenhagen by cruise. There are three cruise ports in Copenhagen (Ocean Quay, Langelinie, Nordre Toldbod) and always a few cruises departing/arriving.

The Best Experiences in Copenhagen: Tivoli and the Little Mermaid statue are the most famous tourist attractions in Copenhagen. But, my favorite experience was visiting the smaller, less populated areas and shops to acquire a more authentic taste of Danish culture.  It is amazing to simply roam the local streets and observe the architecture.

Where to Stay in Copenhagen:  We stayed at the Strand hotel, which is located within walking distance of popular tourist attractions. Most hotels are located by Tivoli, in the center of Copenhagen. However, downtown Copenhagen is very busy and crowded – it is much more preferable to stay on the outer edge of Copenhagen.

What To Know Before Take-Off: Although researching one’s destination is never a wrong course of action, it is not necessary if traveling to Copenhagen. One can explore the city and gain an enriching experience without an all-encompassing itinerary. I did not go to Copenhagen knowing exactly what to do each day – I played it by ear.

Senior Maddie Yoo (she/her) is excited to return as a design editor for her third year on the Tiger staff. She looks forward to creating engaging spreads and fixating too much on line spacing.