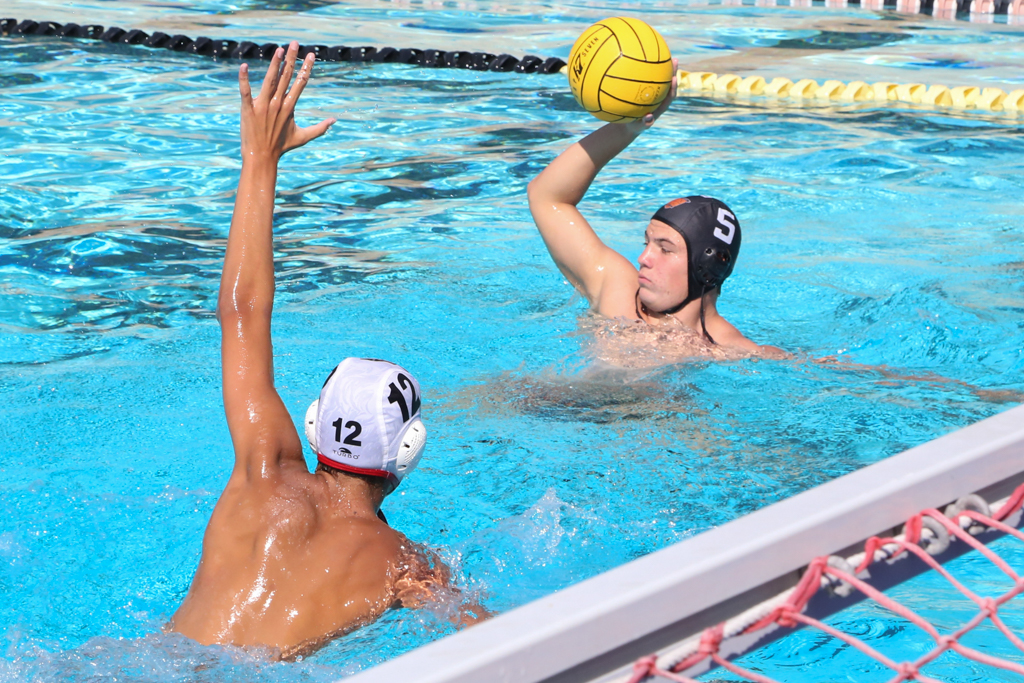 Freshman Dominic Kline grips the ball while preparing to pass over an ensuing defender.

Throughout the game, the South Pas defense overwhelmed the Blair offense, forcing turnovers by stealing the ball, deflecting passes, or causing time violations. When controlling the ball, the Tigers demonstrated their skill by passing the ball around until the possession time was close to expiring, at which point they would rocket the ball into the net.

Just seconds into the game, junior Philip Lee opened the barrage, firing a shot to the bottom left corner to give the Tigers a 1-0 lead. Picking apart the Vikings’ offense, freshman Dominic Kline then stole the ball and efficiently placed a skipping ball into the upper left corner of the net. For the rest of the half, the Tigers relied heavily on players located inside the 1-meter range, with teammates often feeding the ball to Lee or senior Jasper Lee, both of whom were able to spin around and launch the ball into a corner of their choice. South Pas’ offensive prowess was also displayed by freshmen Eddie Lane-Flanigan and Anthony Felix, who consistently fed pinpoint passes to cutting teammates and fired the ball into the net. By the time the horn sounded, signaling halftime, the Tigers were demolishing Blair by an 11-0 tally.

Lane-Flanigan and Kline used their accurate shooting abilities to increase South Pas’ commanding lead in the beginning seconds of the second half. Freshman Maven Palacios contributed to the rout by rifling a penalty shot into the goal before senior captain Andres Limon put the Tigers up 16-0 with a strike to the left portion of the net. In the fourth period, Kline slashed through the Vikings’ defense on his way to two more goals before Palacios capped off the scoring with an accurate rocket to the upper left section of the net. With under a minute left in the game, a Viking shot threatened the Tiger shutout when it evaded freshman goalie Liam Markus’s outstretched arm, but the strike ricocheted off the top left post.

Boys’ water polo hopes to maintain its momentum heading into its second league game against the rival San Marino Titans on Thursday, September 28, at SMHS.