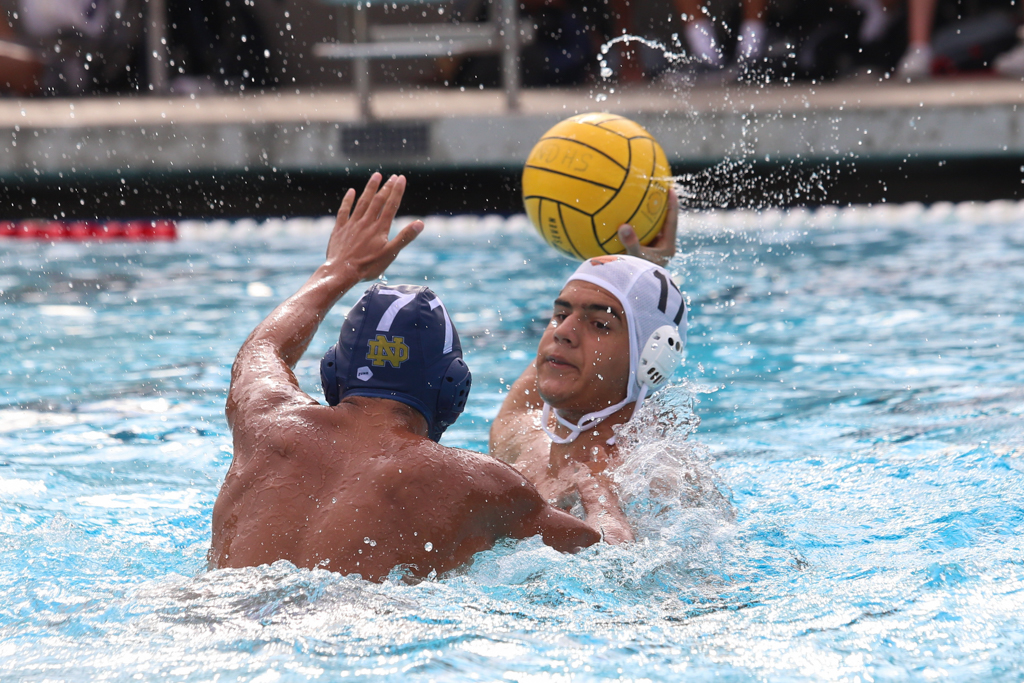 South Pasadena surrendered their first loss of the season to the Notre Dame Knights 14-3, in Sherman Oaks on Tuesday, September 20.  With this loss, the team now stands at 3-1 in preseason play.

Although the final score was uneven, many of the points scored against South Pas were a product of injuries and small mental errors. Throughout the game the Tigers’ were stifled by a unique Notre Dame defense that prevented South Pas from developing plays. Despite preparing specifically for the Knights’ drop defense in practices prior to the game, the team still could not move the ball. Players entering the two meter range were collapsed on, and almost always wilted under the pressure of Notre Dame defenders. The drastic change in defense fostered frustration out of South Pas and caused them to mentally exit the game.

Benjamin Schroeder passes the ball to his teammate.

“I felt like the game only stayed competitive for a few minutes,” sophomore Eamonn Gibson said. “I think we have to work on our ability to play when things aren’t going our way.”

To compensate for his struggling team, Head Coach Michael Gonzales would often sub out all the players in the water to try and gain traction on Notre Dame.

The absence of senior Goal Keeper Robbie Decker and senior DJ Myer, added to a lack of communication and continuity in the game. With Decker out after suffering a groin injury, Gibson was forced to replace him in the cage. Despite lacking experience Gibson collected ten blocks.

South Pasadena was unable to gain traction on Notre Dame for most of the game, and they were held scoreless until the third quarter. They finally scored after senior Cameron Benitez was able to break free on a Notre Dame foul and feed senior Leo Sonner, who knocked down the shot close to the goal. Their second score in the third quarter came from senior Kinan Rodriguez, who was able to score at around 3 meters away to make the score 11-2.  Senior Spencer Gurley scored the Tigers’ third and final goal in the third quarter, capping off the Tigers’ lowest scoring game of the season.

With preseason games over, the Tigers will compete in two tournaments before they open league play at home against their rival San Marino on Tuesday October 4.

Girls’ golf improves to 7-0 against Gabrielino