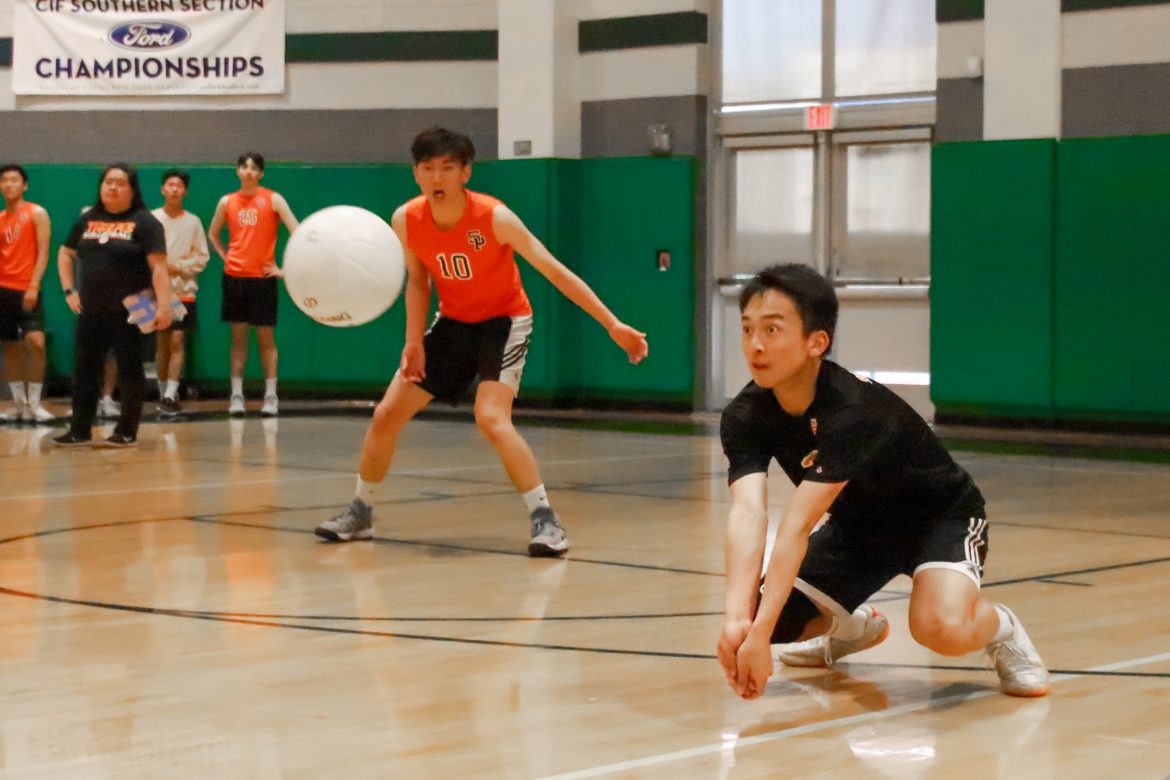 Junior Colin Sheng led the Tiger defense that kept the Pioneers to only 17 points in the final set.

The boys volleyball team trounced the Providence Pioneers in four sets on Wednesday, Mar. 4. After a sharp loss in the previous game, the Tigers focused much of their efforts on their defensive strategy, a choice that allowed them to consistently stay ahead of the Pioneers or make sudden comebacks when they needed to. South Pas will move up to an even 3-3 preseason record with another win under its belt.

The first set was a testament to South Pas’ explosive energy throughout the game. Like usual, senior captain Dylan Schreibfeder and junior Amari Latham put the team at an advantage with a series of easy hits that boosted the point total. On defense, juniors Nolan Call and libero Colin Sheng reinforced the Tigers’ end. The set was a landslide win, South Pas easily achieving 25-15 after Schreibfeder blocked Providence’s last desperate hit.

The Pioneers upped the ante in the second set, winning in a quick turnaround of 25-16. Although Sheng and senior Hanwul Choi aided a strong, cohesive defense, the offense instead slid in momentum. Providence capitalized on South Pas’ slow reflexes and errors and would end up taking home the win.

Senior Scott Ishikawa reignited the team’s aggressive strategy in the third set after thwarting Providence’s attempt to score a point with a kill. With junior Dustin Huang’s accurate setting, other offensive players continued the Tigers’ slew of kills. With defense tirelessly working to stay on top of its opponents’ shots, South Pas never gave up the lead and won the set, 25-22.

The South Pas defense began to struggle at the start of the fourth set. Even as Sheng dove to keep the play alive, the Tigers could not sustain the rally, allowing the Pioneers to earn four points in quick succession.

Things started to turn around mid-set when Huang blocked a narrow shot. He continued with a successful dump shot while Sheng reinvigorated the defense. The set finally ended when Schreibfeder easily tapped the ball down after a Huang set, ending with a score of 25-17.

“Our team went into the game with fire, as we wanted to avenge ourselves from yesterday’s loss [against Los Altos,]” Huang said. “Our passing and defense got better, and we decided to utilize Dylan Schreibfeder and Nolan Call more on the offense. Everything went with the flow, and we were able to make the changes we needed to become more aggressive.”

The Tigers will hope to snatch another win at an away game against Camarillo on Thursday, Mar. 5.