Top Posts
Teachers voice concern over adopted learning models
Community may get a chance to vote on...
SPUSD outlines plans for distance learning during the...
Anti-Zionism cannot be equated with anti-Semitism
Anything goes?
L.A. complies with statewide protections and improvements for...
LARPing: an activity to experience the game beyond...
Residents voice encounters with the SPPD at virtual...
Why affirmative action is necessary
CIF announces athletic calendar for 2020-2021 school year
Home Featured Boys’ volleyball sweeps Temple City in Senior Night
FeaturedSportsWeb Exclusive 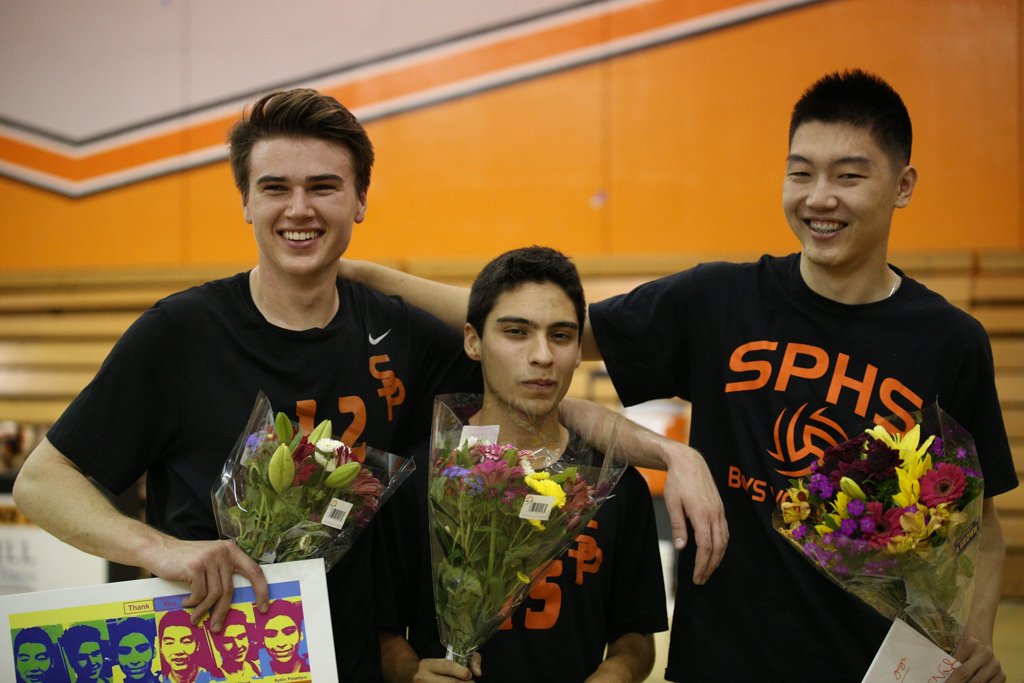 Warm cheers from the crowd filled the main gym today to celebrate Senior Night, the last home game of the Rio Hondo League season. Teammates briefly shared their memorable moments with the three seniors Paul Novak, Aydin Pasebani, and Richard Yu. Carrying the family-like atmosphere to the actual match, the boys’ volleyball team concluded its final home game with a sweeping 3-0 victory over the Temple City Rams with the set scores 25-18, 25-21, and 25-19. The Tigers now stand 7-0 in the regular season and hold a 22-1-1 overall record.

Junior Greg Luck was on another mission for the Tigers, opening up the first set with a hard kill down the Rams’ floor then continuing fantastic offensive performance throughout the whole game. Such strong attacking mentality with quality contributions from junior Matthew Ng led to a quick 8-4 Tiger lead which forced a Temple City timeout. The short break had no effect on the flow of the game as the Tigers kept their dominant control over the Rams. Everything seemed to go right for South Pas when junior Alex Nakagawa made an impressive diving save that eventually led to another kill from Luck. The Tigers rapidly rose to a 19-8 edge, but the Rams started to make a run from South Pasadena’s frequent mistakes on serving and returning down the stretch. Temple City managed to go on a 7-2 run to inch closer at 21-15; however, the Tigers won 25-18 with ease.

The Tigers started the second period in a similar fashion to that of the first set as junior Teodore Davis marked first blood with a stuffing block on a Ram kill attempt. However, Temple City stepped up its defense to establish a 7-5 lead against the home team. South Pas countered with great defense that turned into great offense. Senior Aydin Pasebani became a reliable defensive force and digged many Temple City blocks and hits. Davis, paired up with sophomore Gunther Vaden, remained a blocking threat all along the period, leading a full on charge to reclaim the lead at 20-15. The Tigers made several errors on serving and hitting to allow Temple City to stay behind only two points at 21-19, but ended up finishing the second set 25-21.

Temple City played hard to avoid the embarrassment of another 3-0 loss to the powerful Tigers, putting up a close matchup with the scoreboard reading 13-13 midway through the third set. Junior Max Luck scored an amazing kill at an impossible speed for the Temple City defender to receive to spark up the Tigers to a 16-13 lead, but landed awkwardly on his ankle. Luck left the game in pain and did not return; as a result, junior Josh Karalis stepped on the court and received extended minutes, doing a little bit of everything by contributing in hitting, serving, and receiving. Pasebani continued to be an assisting factor to the Tiger outside hitters. Such efforts put up by all of the six Tigers on the floor led to a 25-19 third set victory to clinch the third straight of the series without a single loss.

South Pasadena hopes to complete the Rio Hondo regular season in a dominant fashion with an away matchup victory on Tuesday,May 5 against the Gabrielino Bald Eagles. With the win, the Tigers finish league 8-0 and improve to a 23-1-1 overall record heading into their journey to receive another CIF ring against prestigious Division II teams in the anticipated postseason.

Baseball suffers fifth loss in a row to Spartans