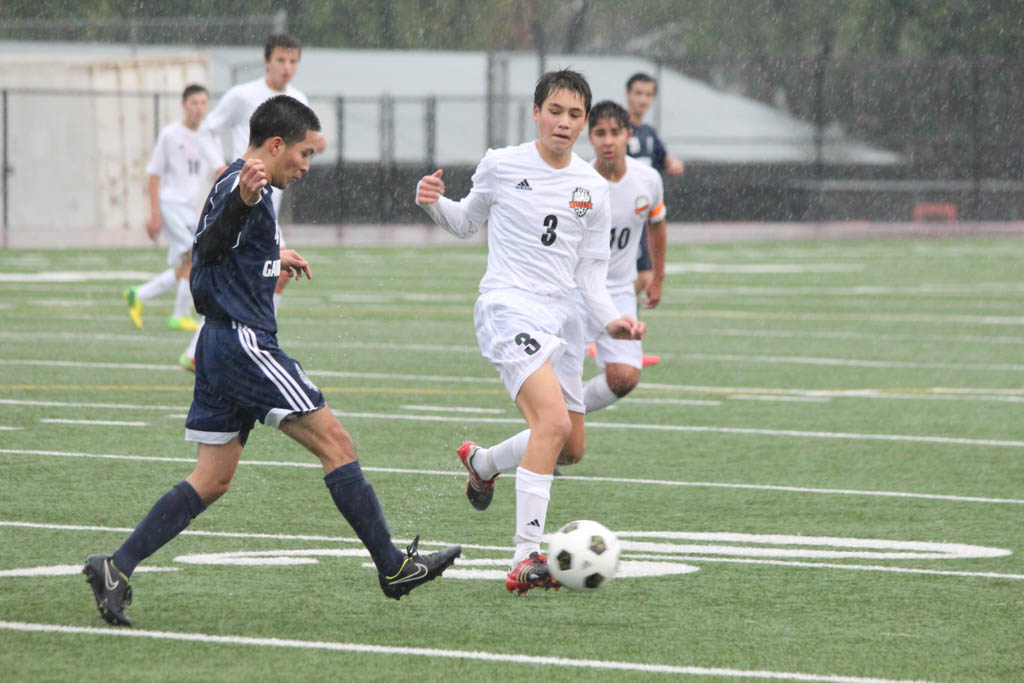 South Pasadena High School varsity boys’ soccer kicked off their much-anticipated preseason with a 4-0 win at home against the Eagles of Gabrielino High School on Tuesday.

The Tigers struck first with two early goals by senior Jordan Jackmon, the second coming on a breakaway. Later on in the first half, senior Ramon Gutierrez had a great look from beyond the box and took a shot, but just barely missed his first score of the season. As the game progressed, senior captain Oscar Jaime received a yellow card for an overly aggressive slide-tackle. The Tigers had multiple chances to make something happen due to miscommunication on Gabrielino’s part, but the boys couldn’t capitalize, ending the first half up 2-0.

Seniors Jordan Jackmon and Ramon Gutierrez celebrate after a goal.

Senior right mid Myris Kramsch said that while the Tigers struggled a little, their errors could be fixed through practice.

“We did fine, even though the rain changed the field,” Kramsch said. “There were some slip ups, so we may need to practice more on creating plays and slowing down the tempo of the play, but all of this can be amended as we practice more as a team, and get a better feel for each other.”

As the second half began, Gabrielino attacked aggressively and missed some key opportunities to score. The Tigers’ offense couldn’t be slowed down, as junior James Tulin received a great cross which he put in the back of the net, giving the Tigers a 3-0 lead. As the game was slowly winding down, the squad showcased their passing prowess, setting junior Oskar Hernandez up for another Tigers goal. Now leading 4-0, the team looked to wrap the game up.

“A couple positives were that we kept a clean sheet and scored some good goals. And we can work on controlling the game more with possession and taking advantage of our opportunities in front of goal,” senior captain Oscar Jaime commented on the overall performance.

The Tigers next preseason game will be on Tuesday, December 9 against Bassett High School at home.

Girls’ soccer falls to Moors in first game of the season